No more co-op in Boss Fights! 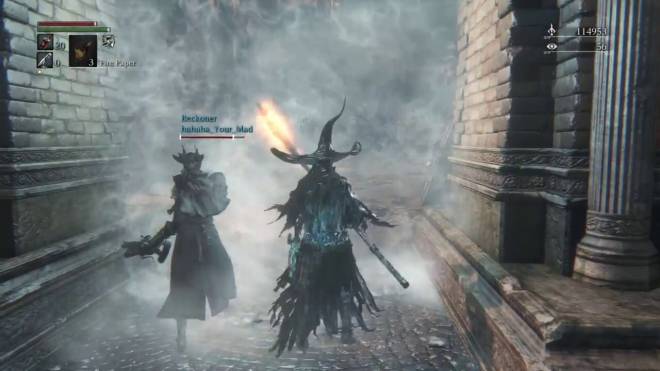 I have sinned! Ever since I realized how casual things can get when playing co-op, whether it is that I‘m joining another players game to farm blood echoes or the other way round. I’ve almost never played solo anymore, however only now I start realizing the negative effects of Co-op. So the normal loop I go through when playing solo is the following. I get into a new level and die, I get frustrated and die more often. I slowly start cursing my life and the game, but then I reach the boss arena and get excited, enter the boss fight....and die again. Rinse and repeat. However all the negative experience, all the frustration and hate immediately vanishes into thin air once I manage to perform the finishing strike on the boss. Not only that but there‘s also that gigantic feeling of accomplishment, the joy and euphoria that lasts for the next few minutes until I start dying again and the cycle starts from the beginning. Now with co-op things are different. I still die and get frustrated, die again and start hating the game. However beating the bosses in co-op is no longer a challenge, so instead of feeling accomplished there‘s just this meh feeling after beating a boss. Only now I realize that only when beating the bosses on my own I can have that euphoria, that new energy for the next level and all, which I‘m just missing out entirely when playing co-op. That why I determined to beat bosses on my own from now on. No more co-op, at least until I start my first ng+! What are your experiences with co-op? I feel like co-op should get a lot more changes. I realized that any boss would just attack one co-operator at a time leaving the other one to do what ever he wants. So my idea would be that with every additional co-operator the boss also get an additional moveset (a new AoE attack, or a new range attack, etc.) so Co-op becomes less of an exploit and more of an option where you have to gauge really well if you would want the additional challenge or not. What do you think?