So after the first boss fight turned out to be fairly easy, I‘ve waited in full anticipation for the second one and it absolutely exceeded any of my expectations. Father Gascoigne used to be a hunter, just like you, so he not only fights with similar equipment like yours but also has a similar combat style consisting of a combination of rolls, sweapon swings and fire arm shots and that‘s basically all he does during stage one! Once at 50% HP he‘ll swap his right hand weapon to a larger axe giving his attacks a lot more range. Although stage two had me dying once as I wasn‘t prepared for his new combos combined with his increased range from his axe the true agony did not begin before stage three! 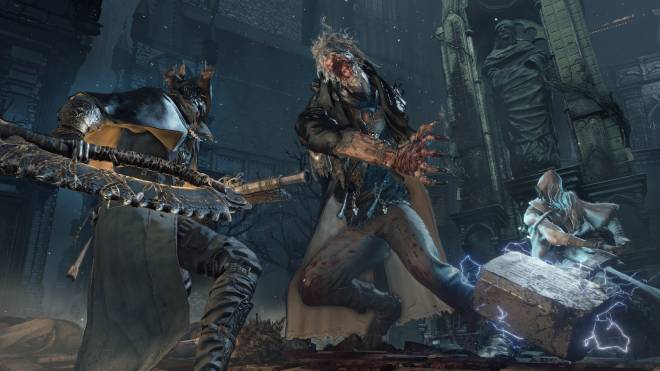 Once at 25% HP he reveals his true form and turns into a dreadful werewolf. Everything you thought to know about that boss, his moves, combos and attack patterns was now worth nothing. I think I died three times the second stage 3 initiated because once in werewolf form Father Gascoigne will launch a fatal jump attack combo that is basically an insta death for you unless dodged intime which really is anything but easy. All the frustration of fighting the beast form of Father Gascoigne was - as it turned out - evitable, with the help of a music box, which sound would stun him long enough to clear out at least one quarter of his health, so in the end the fight was stupidly easy. If the music box didn‘t exist I‘d easily give it a 9/10 in terms of difficulty as well as enjoyment of the fight, but in the end the music box made the fight in the final stage feel like a trip so I give it a 6/10. Also the boss arena, a spooky graveyard was probably the best one in the game. In stage one you could always hide behind gravestones to dodge fire arm as well as weapon damage, in stage two his axe could crush the grave stones so while hiding behind them was still possible it didn’t provide the same amount of safety as in stage one and finally in stage three the werewolf would just smash any gravestones when walking over it, so you basically had to look into completely new way to dodge his attacks. Definitely a really well thought-out arena, I‘d give it a 9/10