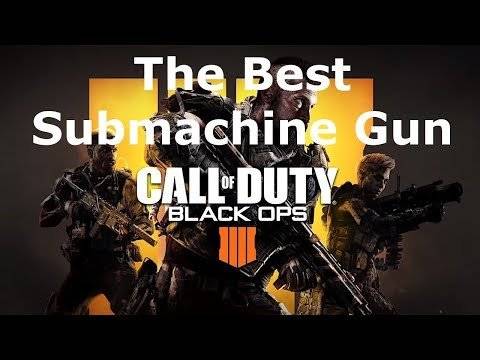 MX9 The MX9 is one of the go-to Submachine Guns in Call of Duty: Black Ops 4 due to its incredibly high rate of fire, as well as its damage capabilities. While it's to be expected with Submachine Gun, the MX9 does suffer from some moderate recoil, which can be a bit of an issue for those that aren't too familiar with the weapon. However, once mastered and used in the right hands, the MX9 is arguably the best SMG available. 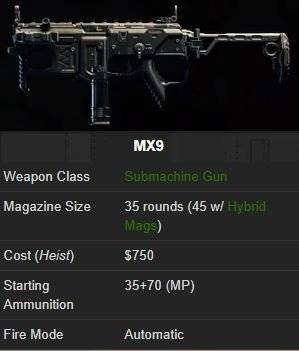 The MX9 is a middling SMG that boasts mostly average characteristics. Its time-to-kill is about average for the submachine gun category, enabling it to edge out most assault rifles in close quarters with sufficient accuracy. Moderate damage coupled with a high rate of fire enable this weapon to win most engagements in close quarters. However, beyond close range, the MX9's recoil has a tendency to pull the sights off target, and can be difficult to control. This limits the weapon's effective range to strictly close quarters, although the weapon may win medium-range engagements in certain scenarios. Handling is about average for the SMG category. The MX9 has no particular strengths or weaknesses in regard to reload time, raise time, or ADS time. The 35 rounds in the magazine can be expended rather quickly due to the high RPM, so spraying is not recommended unless as a last resort option. As such, the MX9 can struggle in prolonged gunfights, especially when taking on two or more enemies at a time. The iron sights are mostly fine for close-range engagements, but some users may find them cluttered, so the Reflex is recommended to improve usability.   The Quickdraw and Grip are strong choices, and both improve the MX9's ability to consistently win engagements. However, the AP Rounds and High Caliber fulfill more niche roles that aren't nearly as useful. In the case of the AP Rounds, submachine guns already have low base damage against vehicles and equipment, and other weapons, like assault rifles or light machine guns, are much better suited to an anti-armor role. In the case of High Caliber, the attachment is entirely dependent upon the user's ability to land headshots, and as accuracy is not the MX9's strength, the attachment is not as useful as on other, more accurate weapons. 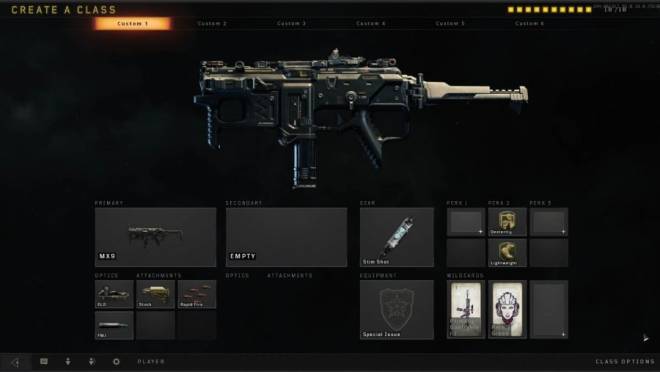 ■ Sights Reflex Holographic ELO NVIR     ■ Attachments Suppressor Long Barrel, II Hybrid Mags High Caliber I, II FMJ I, II Laser Sight I, II Stock I,II   ■ Marcus T's Setup This assault Black Ops 4 create-a-class build is all about speed: you can kill quick, move quick, and heal quick. Playing this Black Ops 4 MX9 class is all about charging through corridors and using your powerful SMG and ability to strafe quickly and accurately to outgun enemies in close-quarters. Widely regarded as the best weapon in the game, the MX9 is the fast and powerful SMG that forms the basis of this assault class. The ELO sight provides a very open optic that’s great for tracking multiple targets. Attached to the MX9 we have a Stock for faster movement while aiming, FMJ for quickly taking down armoured targets, and Rapid Fire to down targets faster. As I’m constrained by the Pick Ten Create-a-Class, this class will not run a secondary weapon, but that frees up a slot for a Wildcard like Primary Gunfighter which allows us to equip a third attachment to the MX9. Anot her Wildcard that is important to this Black Ops 4 class build is Perk 2 Greed, which lets us equip a second ‘green’ perk – Lightweight and Gung-Ho make combine to make this an outrageously speedy class. Finally, we have the Stim Shot equipped as our chosen gear item: it heals faster, is available more often, and can be used without lowering your gun.         #BO4Gunsguide If you have any problems or questions in my Guide, please leave comments at any time! If you follow me, you'll be able to check out my guide quickly in Newsfeed.