Submachine Guns are the only remaining gun I have not reviewed yet. Except for the already reviewed Cordite and Daemon 3XB, we will finish the remaining four and finish the gun guide. 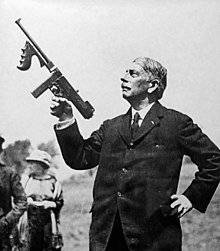 A submachine gun (SMG) is a magazine-fed, automatic carbine designed to fire pistol cartridges. The term "submachine gun" was coined by John T. Thompson, the inventor of the Thompson submachine gun.   The submachine gun was developed during World War I (1914–1918). At its zenith during World War II (1939–1945), millions of SMGs were made. After the war, new SMG designs appeared frequently. However, by the 1980s, SMG usage decreased. Today, submachine guns have been largely replaced by assault rifles, which have a greater effective range and are capable of penetrating the helmets and body armor used by modern infantry. However, submachine guns are still used by military special forces and police SWAT teams for close quarters battle (CQB) because they are "a pistol-caliber weapon that's easy to control, and less likely to over-penetrate the target."     It's really funny, but since the launch of the Black Ops 4, SMG has been consistently evaluating consoles and PCs. People who think smg's are underpowered are console players. As console users side, all of the SMGs in the game are completely outclassed by ARs, even from up close. Wait so are they the same or different? In my opinion, this is the aiming difference between the controller and the mouse not stats, so Treyarch needs to balance the console and the PC differently. I will start with the gun that is at the top of the controversy among them. It is Saug 9mm. 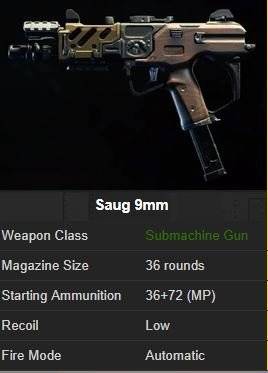 "Full-auto submachine gun. Superior handling with fast fire rate and a smaller ammo pool." High Rate Of Fire! The SAUG 9MM can dish out damage quickly thanks to the rate of fire that's second only to the SPITFIRE.   SAUG 9MM - Unlock Level is 52 In Multiplayer Mode. The barriers of victory seem to be higher because it is a gun that novices can not get easily.         ■ Sights Reflex, Holographic, Threat Detector, ELO   Considering damage and range, sights are not really necessary. This is because it is most effective to close and oppress your opponent with Hip fire.       ■ Attachments Stock I,II, Fast Mags I, II, Quickdraw, Grip, Suppressor   In fact, Saug belongs to a gun that is good enough without any other attachments. 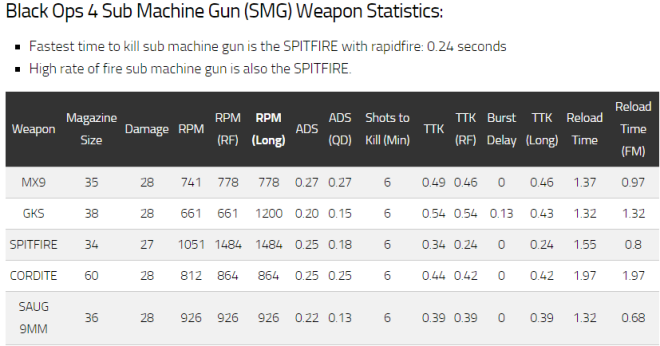 TTK, Speed of fire, Speed of Reloading, and speed of movement are both compliant. Perhaps it is a gun close to perfection. If I have to make a recommendation, I usually roll with Grip, QuickDraw, Fast Mags, Stock 1 (I know it’s an SMG but I need all the mobility while ADS). No secondary. I know. Of course attachments should go their own way. But Perk must put these on. 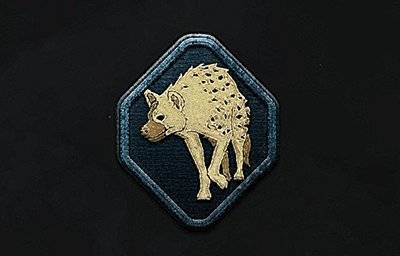 Scavenger Saug got small magazine size. A consequence of the rate of fire is that you tend to run out of bullets quickly since the magazine size is only 36. So you have to keep taking the bullets from dead enemy who is killed by you. 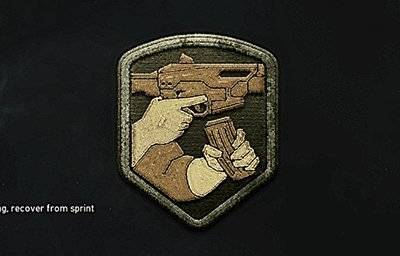 Gung Ho. When you're holding a Saug 9mm, you should always be running fast like Ichiro. So it is essential that fire your weapon and use Equipment while sprinting, recover from sprint faster.     ■ Operator Mod Dual Wield

Dual Wield (also referred to as Akimbo) is a weapon attachment available in Call of Duty 2: Big Red One and in every main game in the series since Call of Duty: Modern Warfare 2. The term "akimbo", used in most games except Big Red One and the Black Ops series, comes from a human body position, but is commonly used in popular culture as a synonym for dual-wielding. The Saug 9mm comes with four optic attachments and seven other attachments, while the weapon’s Operator Mod named Dual Wield allows players to utilize two of these incredibly powerful weapons at one time, although your aim may take a hit as you're be unable to aim down the sights. 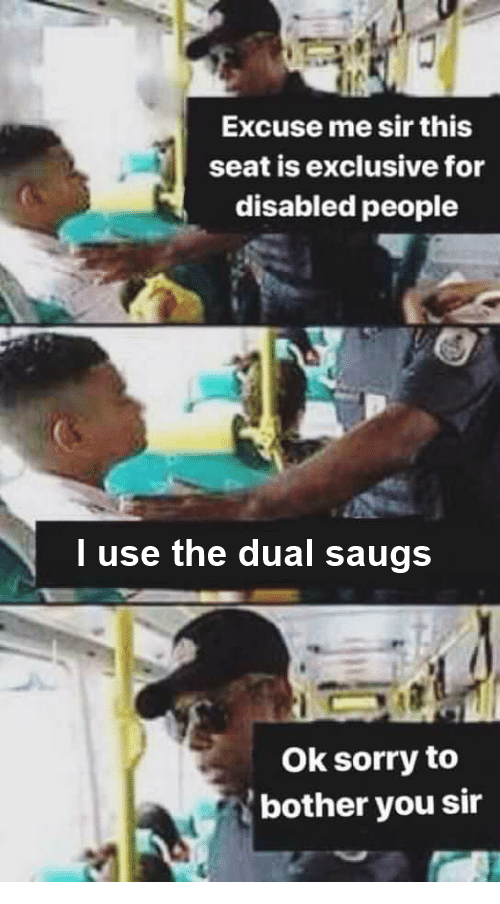 Like this famous meme, Akimbo is a really notorious gun. Akimbo is really a Boss in the alley, not a long distance map like Icebreaker. But Black Ops 4 has almost small maps that's why many people are cursing Akimbo.

I have nothing more to say. If you have Saug's Operator Mod, just run.   #BO4Gunsguide If you have any problems or questions in my Guide, please leave comments at any time! If you follow me, you'll be able to check out my guide quickly in Newsfeed.