14. Sometimes this is Main, Pistols Review. 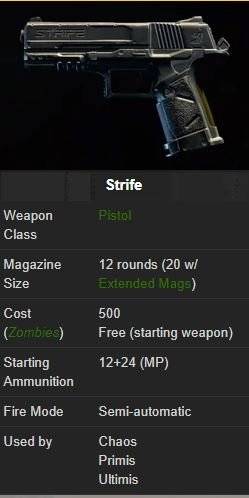 Strife "Semi-auto pistol. Balanced damage with minimal recoil."   For a long time now, the Pistol has been one of many players go to weapons, especially for Zombies. With decent damage and fire rates, don't be surprised if you down your enemies in five to six shots. If you watch some streamers Paladin, you'll be amazed at the efficiency of stripes. Basically, Black Ops 4’s pistols are not ‘Sub-weapons’ we often think of in other Shooters.It's a semi-automatic pistol, but it has a lot of ammunition, and the speed of fire is incredibly fast, so half of your physical strength is instantaneously melted.   This gun does 46 damage at point blank range, meaning you are looking at 4 shots to kill, only one less than the RK7, even if you shove the barrel down their throat. That is just painful for a semiautomatic. But headshots will help, right? Well, sort of.   ■ Sights   Reflex   ■ Attachments   Suppressor Long Barrel I, II FMJ FMJ I,II Extended Mags I,II Laser Sight I,II Quickdraw I,II   Suppressor is highly recommended. The downside is almost unnoticable, as the 4 shot range is fairly massive. It does reduce the range you can 3 shot headshot a slight bit, but not enough to really cause any kind of problems. Second recommended thing is Extended Mags that help stretch out the smallish reserve ammo if you don't take Scavenger.

■ Operator Mod Stiletto Knife   Operator Mod parts are ‘Stiletto Knife’, attaching a combat knite under the pistol to make a cut in Lethal melee attack... It is hard to imagine if the Operator mods is attached to the secondary weapon. Rather, I want to ask. Why?   And Stiletto knife is not counting towards combat knife camos 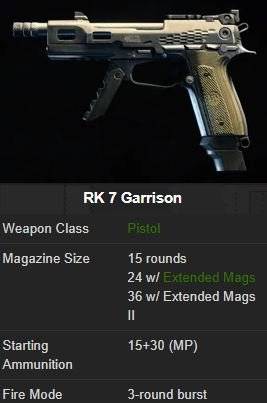 RK 7 Garrison "3-round burst pistol. Fast cycling rate of fire with moderate recoil."   Lacking the stats of the Strife, the RK 7 Garrison is a three burst pistol that offers a rather impressive fire rate. However, the weapon has some pretty moderate recoil, making it a bit more of a challenge to control.   ■ Sights   Reflex   ■ Attachments   Suppressor Rapid Fire Laser Sight I, II Grip I, II Extended Mags I,II Personally, I think it's better to have a Strife or a Mozu because of the timing of the break after burst. It takes a really hard effort to get this diamond skin. As described, RK 7 Garrison too weak to compete with other secondaries 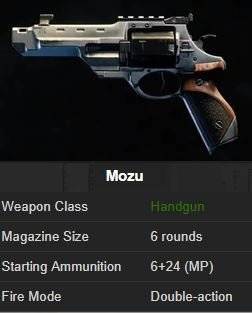 Mozu "Double action revolver. Highest damage in class with long range capabilities."   When it comes to high damage pistols and rather impressive range, the Mozu should definitely be your go secondary weapon. 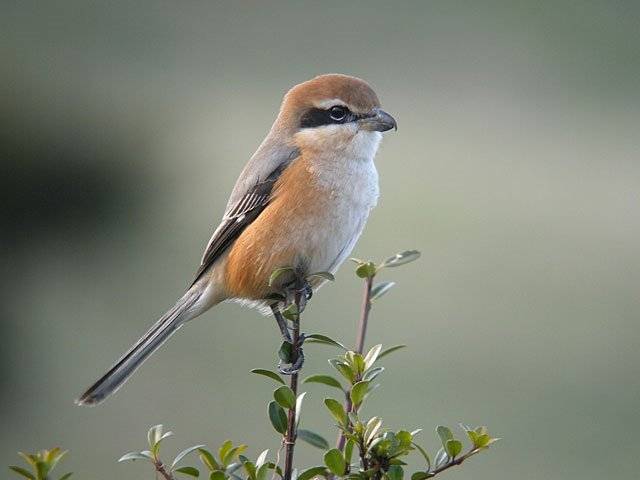 "Mozu" (in Japanese: モズ) means "butcher bird", known to impale its prey upon sharp points like thorns to stock-up food and mark its territory.   ■ Sights Compact Scope   It’s a Magnification Optic. Press the right stick while aiming down the sight to switch between 1.5x and 4.0x zoom levels.   ■ Attachments   Long Barrel I, II High Caliber I,II Speed Loader Stabilizer I,II Stock I,II Quickdraw I,II   High Caliber is inserted into the subject of a pistol. it's very strong. However, because of the low number of live ammunition, it has to be put in one at a time, so it has to be used as a disposable material.But if it is not a challenge for the skin, it's a waste of space for the Secondary Weapon.

■ Operator Mod   Skull Splitter   It is only available for the Mozu and ensures that every headshot with the Mozu is lethal. In Zombies mode, the attachment gives the Mozu a significant headshot damage boost. This effect gets stronger with every Pack-a-Punch. I usually use it as a run and gun type of class. Makes it so fun to three shot,three kill a group of rowdy boys. 1 shot headshot no matter what                     #BO4Gunsguide If you have any problems or questions in my Guide, please leave comments at any time! If you follow me, you'll be able to check out my guide quickly in Newsfeed.