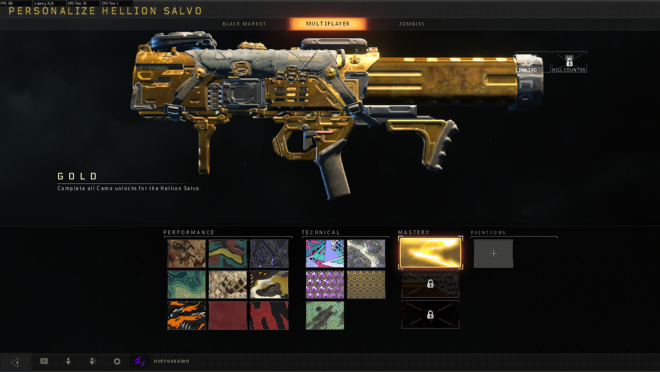 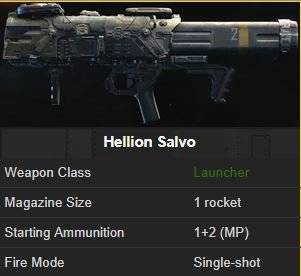 "Lock-on or free fire rocket launcher. Reliable anti-vehicle weapon with anti-personnel capabilities."   The Hellion is best used to deny enemies their scorestreaks. Bring down enemy attack choppers by locking on to them! In fact, it's more a portable surface-to-air missile than a rocket launcher. The explosion effect is not that big, but it has a wide range of indirect explosion damage, and gives about 100 damage. In the case of a direct hit, one shot one kill.     ■ Attachments

As you all know, there is a fast lock missile missile for the attachment state.   In addition to helicopters and airplanes, induction is also applied to Mantis and Sentry. In a blackout, it is also a vehicle. For reference, Razor Wire and Barricades are unlockable , but they are also good for cracking them. The Razor Wire flew in one shot. 'Rocket Cache', which gives you 2 more rockets, 'Fast Loader', which speeds up reloading, and 'High Explosive', which increases explosion radius and damage. High Explosive increases perimeter damage to 140 when equipped.     Using a base Hellion Salvo with no attachments, UAV, Counter UAV, Drone Squad drone, Care Package chopper – one rocket Sentry – two rockets Sniper’s Nest, Attack Chopper – three rockets Mantis – four rockets Strike Team deploy chopper, Gunship – five rockets   Basically, the attack/sniper helicopters that appear in multiplayer will avoid the rocket by making the rocket disarmed when the rocket approaches, and avoiding the rocket to some extent. If your opponent attack helicopter or sniper helicopter appears, you can drop it right away and it will help your team. However, what makes the Titan the better option is it’s versatility when it comes to enemies rushing you while you’re focused on shooting Scorestreaks, opposed to reorienting your sights with a sniper rifle.       For comparisons sake, I takes a look at Specialists weapons such as the Tempest and Annihilator. Since taking out Scorestreaks with these weapons consume a good portion of their ammo, he recommends only using these if it’s a close game and it’s your only option.   For example, here are the quickest options – the time being from when you have sights on the chopper until it’s destroyed.   Hellion Salvo (no attachments) – 11 seconds Hellion Salvo (Fast Loader + Fast Lock) – 9 seconds Paladin (hitting all five shots in the magazine with FMJ II) – 8 seconds Titan (FMJ II) – 7 seconds Annihilator – 4.5 seconds     #BO4Gunsguide If you have any problems or questions in my Guide, please leave comments at any time! If you follow me, you'll be able to check out my guide quickly in Newsfeed.