How a below average team won their first match of Warzone

I have a confession. I don’t like First Person Shooters. I never have, they all feel very same-sy to me, and it always seems like I’m just playing the same game with a different skin on it. Any time I play an RPG with an option for a third person view, I take it. I tend to stay away from FPS games. Call of Duty is my one exception. This series IS the FPS genre. That being said, I’m not that great at it. I have about a 1:1 kill ratio to my name and although I’ve had a game in multiplayer with 37 kills (humble brag) , I’ve had countless games with 4 kills and 16 deaths that make me contemplate eating my controller.   So Warzone releases and I gather my team together. Who is my team you ask? Two lifelong friends, one who plays literally nothing but sports games 99 percent of his gaming time and the other who I’ve had to bribe to play The Witcher 3 and plays nothing but sports games as well. Then you have me, an avid RPG fan who has rediscovered his terrible college addiction during this quarantine in the form of Call of Duty: Modern Warfare. That isn’t exactly the A team you want, It’s more like the C+ team. But we decided to throw our hats into the battle anyway and enter the 150 player gauntlet of pros, newbs, old, young, men, women, current military, ex military, two legged people, 8 legged people (don’t discount the octopus gaming community) and everyone in between. 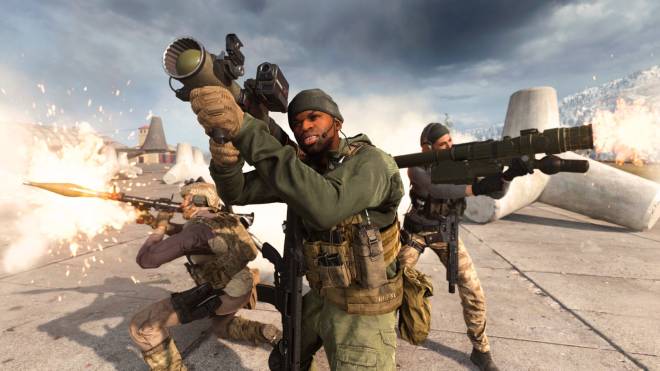 We began pretty terribly, zero knowledge of the map, or what strategies we weren’t going to use didn’t help much either. We were constantly separated to begin games and had some terrible games in the early going. Soon, we came across our first major hurdle, only two of us had Call of Duty: Modern Warfare, meaning one of us had no ability to get their ideal loadout. To say this is a disadvantage is an understatement because once you get your loadouts, the game changes. It becomes less avoid all conflict and switches to I will destroy anyone in my path. Despite this, we had some solid finishes. We would become pretty successful scavengers and found several great places that would fit as a spot for a final stand. Camping was not an option, but we knew how to fortify a place once we got there. We achieved top 5 multiple times and then yesterday, we began the day with a 3rd place finish that was so brutal in its’ ending, we recounted the events that led to our demise at least 10 times in the following games.

You see we had all three players alive, stacked with legendary weapons and we found ourselves in the middle of the final circle, sacred ground indeed. The problem was this god damn circle decided to be in this weird ass structure with literally nowhere to take cover and the following sequence happened. We had two guys covering one side and one covering the other, then all of a sudden, “Shit, they’re behind me, I’m dead.” I had no idea where behind him actually was, so I spun in circle and started running to try and dodge whatever nightmare that was coming for us. Then, a Flashbang I hear “Can’t see shit what the hell.” Dead. I’m blinded too and come out of my flashbang daze just in time to get sniped from god knows where. That was it, we watched the match finish out with a demonic determination to get back to this spot and not mess it up. We would indeed return to this same situation once again.

Just four games later, after an incredibly poor start that started with one of us dying immediately, we managed to get a vehicle and stock up on some prime equipment. Then our resident gulag expert added to his astonishing record in there with a win despite having by far the least FPS experience out of the three of us. His trick? Don’t aim. No seriously, don’t aim, just leave the gun at default level and when the other player comes into view, just move left to right until you get a clear headshot, it sounds stupid as hell and it works. I don’t get it, but I appreciate it. Now, we’re back to three and we’ve got a car and an insane amount of good equipment, so we begin our fated match to the center of the circle, careful to stop by small houses here and there to take cover and gather money. After accumulating a decent amount, I decide to pick up a cluster strike. Now, whenever I pickup a cluster strike or precision airstrike, I NEVER get the right opportunity to use it. Players are always moving or I always resorted to normal weapons instead. Keep this in mind.

We trudge on through the bottom west portion of the map to find ourselves in a small city with tons of buildings. We immediately see our map light up with red dots, enemies are close, we go forth. We eventually come to a building that is clearly crowded with enemies and decide to go in anyway. It’s clear they’re upstairs, that’s fine, we’re going to make our home the downstairs area. A big problem arises, there are SO many rooms, it’s impossible to know which to choose. We randomly chose one in the corner that was an abandoned apartment. What a decision that turned out to be. We immediately rig the door and underneath the window sill with claymores. 20 players left, now we wait. Camping you say? No, the circle basically is telling us if you leave this area, good luck surviving. The circle begins to close and what do you know? It cuts off half the room, so one teammate scrambles to the other side to prevent suffocation. This bodes well I think, but then we were spotted. Another team was perched above us in a warehouse and then started raining bullets on us, two of us were getting lit up by snipers with little to no cover and a giant wall of green gas hell was blocking any form of escape. It was then that I noticed the little icon in the bottom right corner of my screen. Cluster Strike. Better late than never, I equip it and aim into what’s now a mixture of smoke grenades and green gas and let it lose.

The first few bombs strike and…nothing. Waste of a strike, BUT THEN the final strike hits and takes out no less than 4 players. My screen lights up with +500 and I have no idea what that means in the chaos, but I assume I at least downed a bunch of people. The rest of the players come sprinting into view of our window including one poor soul who decided to hop into our apartment and promptly got his face blown up by our shotgun happy teammate. The gas closes. The circle becomes smaller and smaller, yet we remain in place. As other players approach the window, I spray a hail of bullets outside the window hitting some people I can’t even see at this point as the gas comes closer and closer.

Then something odd happens. The game still says players are alive, and I quickly check the map. The circle is all gone. The gas surrounds us as our life bars start to drain, every curse word in existence is emitted through my headset by all three of us. Did this game just glitch us to death in our moment of glory? Then the words of relief through my headset. “Dude, we won.” As the fabled helicopter lowered to take us away to safety, I still didn’t believe it until this flashed across my screen.

Exhalation and shock all at the same time. We, a group of below average FPS gamers had just bested 147 others. That may not sound like much to the uninitiated, but trust me, when you play this game, you begin to understand how hard it really is to achieve. For years, one of my roommates would scream into his mic in the late hours of night when he won 1st place in Player Unknown’s Battlegrounds and I would respond with something along the lines of

But now I get it. It’s an achievement. It’s insanely difficult and the final moments of a game of Warzone are among the most nerve wracking and intense ones I’ve experienced in my lengthy gaming career. It’s very possible we won’t ever win another one, but for one gleaming moment in the world of Call Of Duty: Warzone, we stood alone at the top of the mountain.   How about you guys? What was your most memorable moment so far in the early days of Call of Duty Warzone? What are you looking forward to in the season 3 update this week? Let’s talk about it in the comments below.