BATTLE ROYALE WHAT'S NEW? Boom Bow Archery can be a blast! Nock enemies in a whole new way with this explosive new weapon. 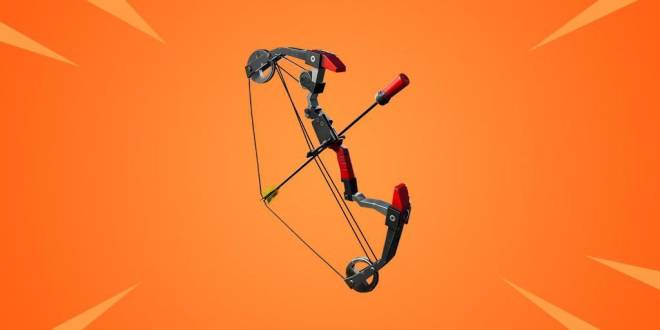 LIMITED TIME MODE: SNIPER SHOOTOUT Summary In this limited time mode, players will do battle using sniper rifles. May the best aim win! Mode Details Only weapon drops are Sniper Rifles. Floor Loot spawners reduced by 50% Reviving "Down But Not Out" teammates in Duos & Squads is deactivated - be careful peeking! WEAPONS + ITEMS Boom Bow Fires Arrows with a Shotgun Shell tip, which explode on impact. Uses Shotgun Ammo The longer you hold the fire keybind down, the stronger the shot! This increases both projectile speed and direct impact damage. Explosive damage is consistent regardless of the power of the shot. The Boom Bow will achieve maximum power after 1.6 seconds of charging. A direct hit will deal both the direct hit damage and the explosion damage to the enemy player it impacts. Direct hit Base damage 15 Headshot Multiplier: 2x Explosion 100 damage Peppers Increased duration from 10 seconds to 20 seconds Increased movement speed bonus from 20% to 40% EVENTS Bug Fixes Arena Fixed an issue that caused players to be unable to queue for Duos when the party leader was in a lower division. Fixed an issue which caused players to not be promoted to the next division while playing in Duos with a player in a higher division. Note: Hype was still being earned correctly, this was a visual issue only. Fixed an issue where players in Duos were charged Bus Fare based on the party leaders division, rather than their own. #fortnitenews #mootmafia #Leo64