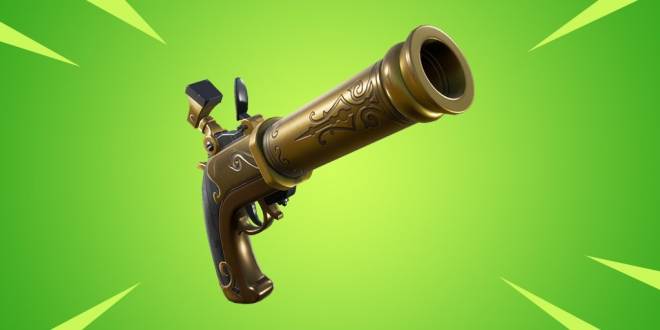 Flint-Knock Pistol Knock, knock...who’s there? Flint-Knock, that’s who! Pick the perfect time and knock yourself or enemies back with this new weapon! WEAPONS + ITEMS Flint-Knock Pistol Available in Common and Uncommon Rarities. Found from Floor Loot. Knocks back the shooter. Can also knock back the target if they’re close enough. The closer you are to the target, the farther they get knocked away. The shooter can crouch to prevent the knockback. Close range damage: 86/90 Significant damage falloff. Must reload after each shot. 3 second reload time. Uses Heavy Ammo. Unvaulted the Impulse Grenade Impulse strength against vehicles has been increased by 344% Increased the impulse strength of explosive weapons against vehicles by 233% Scoped Assault Rifle Increased base damage from 24/23 to 27/26 Reduced the spawn rate of the Baller from 100% to 50% LIMITED TIME MODE: ONE SHOT Summary Low Gravity. Every player has 50 health. Snipers are the only weapon and Bandages are the only healing item. Jump high and aim well! Mode Details Gravity is set lower than normal. The Storm wait time has been greatly reduced in all phases of the game. The only weapons in this mode are Hunting Rifles and Sniper Rifles. Semi-Auto Snipers and Bounce Pads have been removed from the Vault in this mode. Players will spawn with 50 health, and can only heal if they find Bandages. EVENTS Tournament Update: Gauntlet Solo Test Event & Gauntlet Duo Test Event Added two additional extended sessions, which will run 24 hours a day. 3/19/2019 00:00 UTC until 3/23/2019 00:00 UTC 3/23/2019 00:00 UTC until 3/26/2019 00:00 UTC New Tournament: Blackheart Cup (March 23rd & 24th) [$100,000 in Cash Prizes!] Participation in this event requires players to have placed in the Top 3% (global) of any Gauntlet Test Event session prior to the start of the tournament. The prize pool will be distributed across all server regions, with official rules and details released later this week. Format: March 23rd - Round One: All Eligible Players March 24th - Round Two: Top 3000 Players from Round One Participating in tournaments and the Gauntlet Test now requires a minimum account level of 15. The requirement was previously at level 10. AUDIO Bug Fixes Fixed an issue that caused The Baller’s tow-hook “release” sound to trigger twice each time. UI Bug Fixes The new style for the Whiteout Outfit can now be selected. Event leaderboards no longer display everyone as being at rank #0. ART + ANIMATION Adjusted lighting. Increased lighting contrast in areas of shadow. Increased color vibrancy. MOBILE Bug Fixes Fixed an issue where full-screen support was not working on Samsung S10 devices. Fixed an issue preventing in-game surveys from appearing on mobile devices. These random surveys were added in the v8.10 update but were not appearing on mobile devices. Be sure to leave us your feedback if you receive one after a match. Fixed various mobile stability related issues. We’ll be monitoring their impact and continue investigating any additional issues. Let us know what you’re experiencing on our social channels. https://www.epicgames.com/fortnite/en-US/patch-notes/v8-11