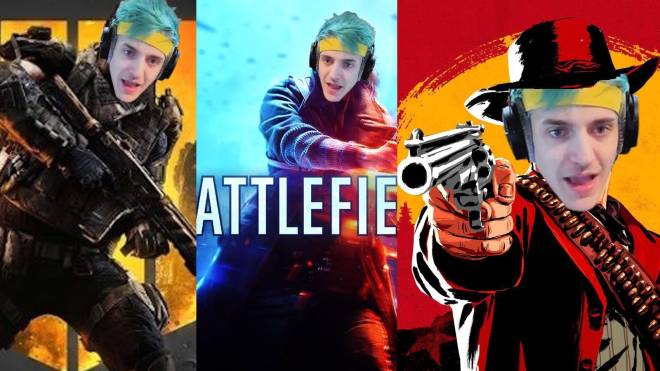 Ninja is the most popular streamer in the world playing the most popular game in the world, but it might not be that way forever. While streaming, Ninja explained what kind of game could take him away from Fortnite, implying it would have to be a popular shooter. "It would have to be smart, I’m not going to leave Fortnite for, like an MMO,” said Ninja. The former Halo pro discussed his reasoning for choosing the games he plays, saying that his fan base expects him to play shooters. https://clips.twitch.tv/GeniusExcitedChimpanzeeKappa?tt_medium=clips_api&tt_content=url

"For example, when I switched from Halo, I switched to H1Z1, a shooter...A game that my audience can relate to… Then from H1Z1 to another Battle Royale shooter, PUBG. Then from PUBG to Fortnite." The fall season will bring massive new shooters like Black Ops 4 and Battlefield V, both of which feature battle royale modes and would fit Ninja's criteria. Also set for release soon is Red Dead Redemption 2 from developer Rockstar Games, which could meet Ninja's popularity requirements. Read More: Ninja reveals why he doesn't see himself competing at Fortnite's highest levels However, Ninja left open the possibility of playing a new genre of game, saying “I don’t know, when the time comes where I might want to switch up genres, or stream a game full time that isn’t a shooter, I might do that.