We’re getting there with Frotnite’sFortbytes: there’s still plenty to go in the season, but there are enough available now that the picture is starting to fill in. It’s obviously Jonesy in the bunker, but questions remain as we reveal not only the depths of the bearded default’s madness but the potential fate of Peely, the loyal companion that followed him into the vault but did not come out. There are many more mysteries yet to be had here, I’m sure, but to solve them we’re going to need to keep collecting these here Fortbytes, one at a time. Read on for a map, guide and location for Fortbyte #22 “Accessible by Using Rox Spray in an Underpass”. This is similar to the “Rock Love” Fortbyte from last week, and it’s the second such Fortbyte we’ve had so far. It’s pretty simple, just like the first one: the trick is knowing where the underpass is. There are two in the game, to my knowledge: one is now full of lava and not good for a whole lot besides camping, and the other one is where we’re going to go to get Fortbyte 22. It’s in Neo Tilted, towards the center. Here’s where you’re going: You’re going to the corner on the western side of the underpass: you should see the locked Fortbyte floating in the air right there. To collect it, just use your Rox spray anywhere in the general area and it will unlock. You get the Rox spray at level 5 of the battle pass, so this shouldn’t be a problem for anyone who’s in the mix this season. Here’s what it looks like on the ground: 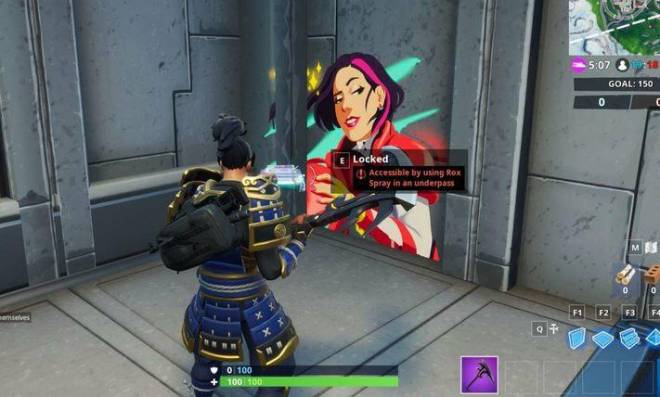 If you’re doing this one this morning, you’ll likely be able to identify the location by all the other Rox sprays in the area, like I was able to. This isn’t the most straightforward of these, mostly because this isn’t the first thing I think of when I hear “underpass” in Fortnite, but like all of these location-based challenges, it’s pretty straightforward once you know where you’re going. Check back for more tomorrow. #Fortbyte Source: https://www.google.com/amp/s/www.forbes.com/sites/davidthier/2019/05/19/fortnite-fortbyte-22-location-accessible-by-using-rox-spray-in-and-underpass/amp/