In the distance, we are seeing Galactus slowly rise up either over the horizon, or out of the water, I’m not quite sure which. Every day he seems to be getting a little bit higher, and this will ultimately culminated in when the countdown timer on the battle pass table reaches zero on December 1, when we will see him in all his glory and then…try to kill him. 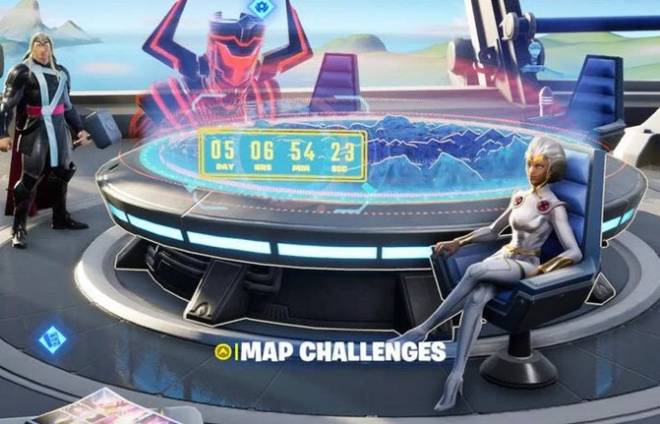 What comes next is being described as “an interactive Marvel movie,” and my theory is that it will be a blend of both pre-rendered fight sequences, Marvel NPCs zipping around doing damage to Galactus, and us as players shooting at him to take down trillions of HP across all platforms and servers of Fortnite, the culmination of years of Epic gearing up for a big “final boss” moment like this, and what would be technically the biggest video game boss fight in history, with millions of players participating at the same time. This is all leading to what appears to be one of the biggest moments in Fortnite’s lifespan, with the “Nexus War” apparently being a blend of IPs in a way that we haven’t seen to date, with the Metaverse more in sight than ever as Epic looks to integrate not just Marvel, but even more IPs more so than they’ve done to date. We already have seen leaks that show The Mandalorian and Baby Yoda coming to the game next season, joining a bunch of Star Wars characters from back when they were promotions for the new movies. Anyway, for now we can keep tracking Galactus moving out of the water as we head into next week’s big event. I’m not sure if this is hour by hour or day by day, but I’m going to keep checking in to see where he’s at periodically, so stay tuned for that.