Greetings, master! Your loyal supporter Mona, at your service! ♥   Welcome to another chapter of Mona’s Destiny 101!   Have you ever experienced being your inventory full of same Childs? If you’re thinking of just extracting Onyx from them, I strongly suggest you read through this article!   On today’s article, I’d like to talk about “Uncap” system, which is also important when it comes to making your Child stronger!   So, let’s get right into it, shall we?   ■ What is Uncapping? What are some benefits of doing it? 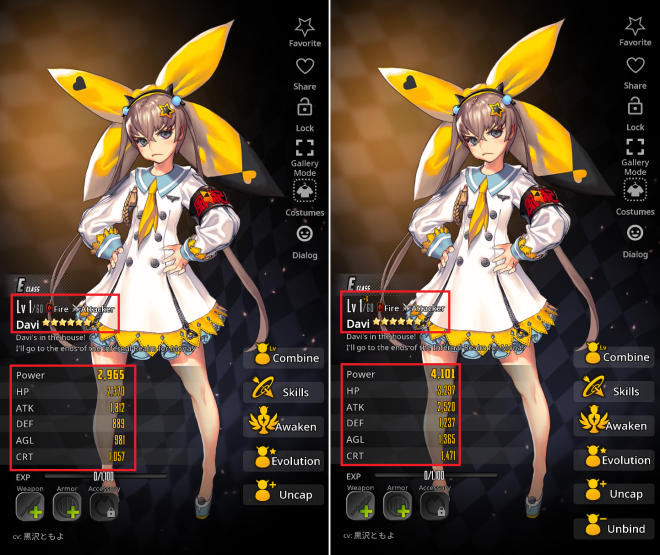 <Comparison between +0 Davi and +6 Davi> Uncapping is the method of binding two or more same Childs into one. This will unlock its skill ranks by 1 tier, allowing you to train your Child’s skill level even higher. Also your Child’s stats will also increase every time you uncap the Child.   Maximum uncap count depends on your Child’s rarity(★). In order to fully uncap your Child(up to +6), you need to evolve it into ★6 first.   Please note that you should NOT “combine” them if you’re trying to uncap your Child. One more thing you should be aware of is that you should not use evolved/awaken/leveled-up Child as an uncapping material.   Once the uncapping is done, you will lose all of the progress you had made to your material Child. Please make sure to double check before uncapping!     ■ Can I split it? What happens if I do so? With a little bit of Onyx, you can unbind an uncapped Child anytime you want. However, there are some disadvantages of unbinding, please check the details below. * Obtain material Child in its original state For example, if you unbind S class 6★ Lv. 60 Davi(+6), you will eventually get: - S class 6★ Lv. 60 Davi(+5) - E class 3★ Lv. 1 Davi(+0) Even if you had used S class 4★ or higher Davi as an uncapping material, the system will give you the original state of material Child, which is E class 3★ Lv. 1 Davi(+0).   * Stat decrease As you unbind your Child, it will lose the stat bonuses obtained through uncapping.   * Skill level and tier decrease As I mentioned before, uncapping unlocks the Child’s skill ranks by 1 tier. After unbinding, skill levels will be adjusted based on the uncapping value. For instance: 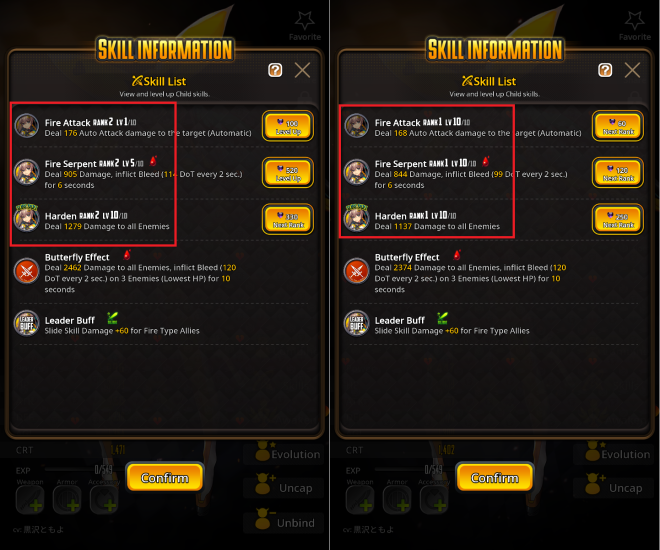 <Example: Unbinding Davi(+1)> As you can see, since Davi(+0) cannot maintain Rank 2 skills, they will decrease into rank 1 when the Child is unbound, adjusting those skills’ levels into 10.   And of course, you cannot retrieve Onyx you had spent to increase the Child’s skills.     ■ What happens if I use uncapped Child as a material? Not to worry! The uncap value will increase according to material Child’s uncap value. 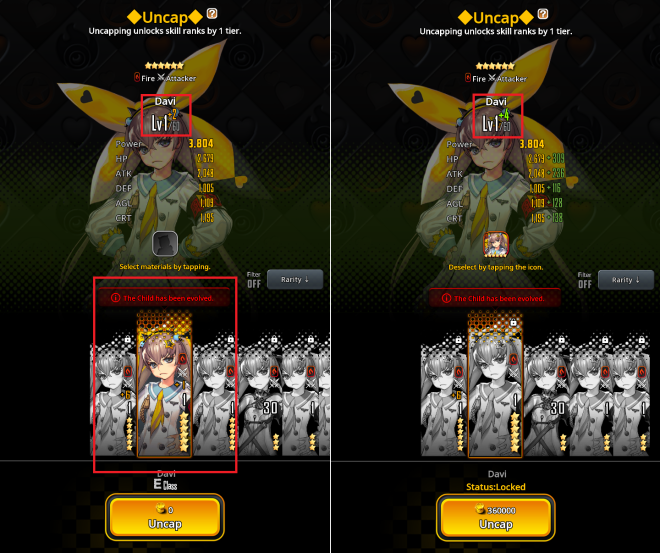 As you can see from above, if you use an uncapped(+1) Child as an uncap material, uncap value will increase by 2!   It’s simple! Just think that you’re using two Davi at once as an uncapping material.     Mona wishes my Master to be stronger from Mona’s help! ♥ I’ll see you in the next article. Bye!