It is a must to make your Childs strong. Childs can become strong in various ways. Let’s find out how. 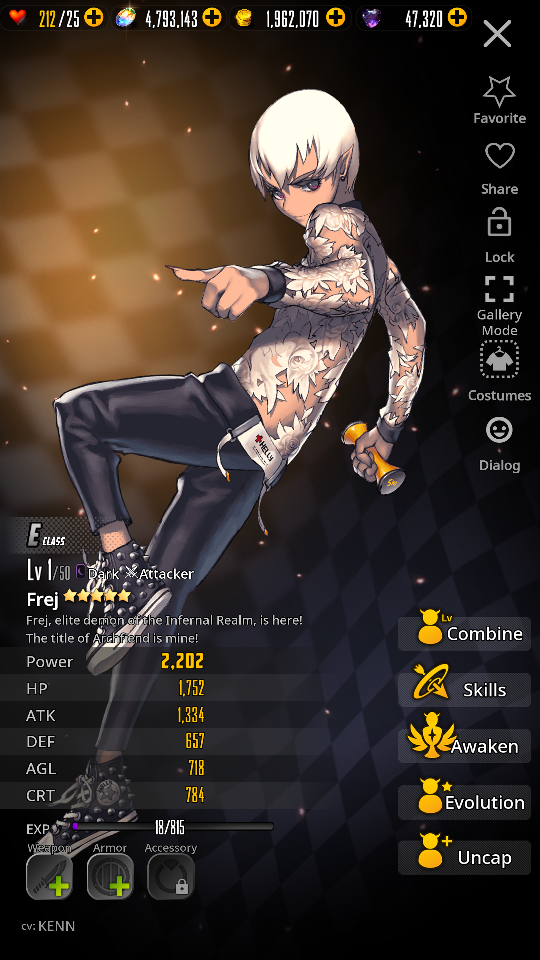 [Combine] Raise a Child’s level! By battles, or using another Childs and gold also could be an option: - Why do I need combining? - ATK, HP, and other stats increase as a Child’s level goes up. - How to combine? – Use Combine button to combine. - At most 6 Childs can be combined to a Child. When using auto fill, Childs will be selected as combining material starting from the one displayed on the far left. Locked Childs, those on a team, and those on an exploration will not appear on the material selection screen. - You can earn 10% attribute bonus EXP by combining the same attribute Child. - You can earn more EXP by combining EXP Childs than other Childs. You can get EXP Childs in Event Dungeons.   [LEVEL CAP] Level caps vary by Childs’ rarity. When the rarity increases by evolving a Child, the level cap will rise as well.

[Skills] Skill’s Rank and level can be enhanced. - What is skill level? – Childs have skill levels and when they go up, the effects of skills improve. Raising levels and ranks requires Onyx.   <Skill Types> Childs have 5 different types of skills: Auto Attack, Tap skills, Slide skills, Drive skills, and Leader Buff. Only Auto Attack, Tap skills, Slide skills can be leveled up by Onyx. 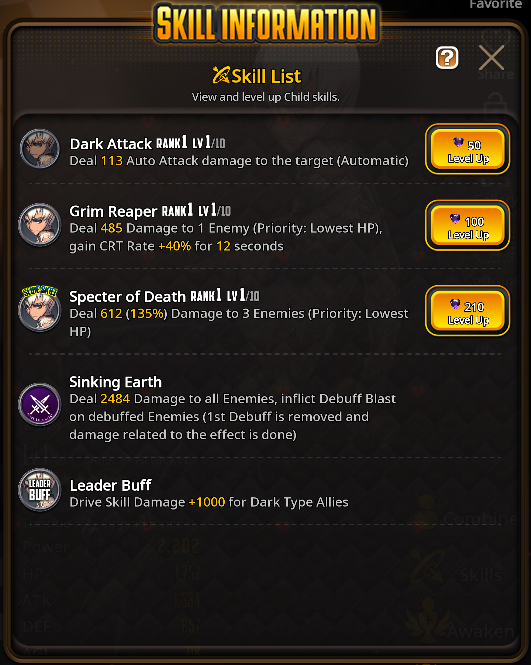 - Skill Level Up – The level of skills can be raised up to 10. Skills have the rank of 7 at most. When the skill reaches level 10 you can raise its rank if the Child is uncapped enough. Check on [Uncap] chapter for the details. Raising a skill’s rank rolls back its level by 1, but you can raise the level even higher and it can be used as an even more powerful skill.   [Awaken] Awakening will change your child forevermore stronger! - Awakening Reward – When a Child’s awakening class goes up, its stats get a boost, and new voices and awakening scenarios will be unlocked. Raising a Child to S Class unlocks a slot for equipping an accessory and gives you a new costume.   [Evolution] All Childs can be 6-star! All stats will be improved significantly when your Child star-d up! Childs maximum level increase as well.   <Evolution Requirements> -Childs must be at max level -Collect necessary evolution materials -Collect Evolution Childs or Childs of the same rarity -Gold

- Material Childs – needs the same star as the Child you want to evolve When evolution is complete, the Child will retain the same strength but its level will roll back by 1. However, it will retain its skill levels and ranks.   [Uncap] Use the same Child to uncap your Child. Uncapping dramatically improves a Child’s stats and raises its skill ranks.

- Uncapping Count Limit – You can uncap a Child the same number of times as its rarity. 6-star Child can be uncapped up to +6!   *Note: If you use an uncapped Child to perform uncapping, the uncap count will be increased incrementally, but any increase that exceeds the limit permitted for uncapping will be lost. You can uncap your Child regardless of its rarity. i.e.) You can uncap 6-star Fraj with 5-star Fraj.