Some suggestions/ideas for Devs

I recently saw a video in which was shown that Destiny Child Monthly Revenue was shown around 170k only. I don't know if the revenue was shown there was only the revenue of Global version or the total of all versions available. But on comparing it with other games revenue I was genuinely disappointed. On seeing that something just broke in my mind and was depressed on knowing that DC is providing such high quality stuff with highly F2P mechanics but still earning so much less as compared to other games which just shows chibis or pixels on screen. So I have some ideas how DC can boost it's revenue alongwith some ideas that will optimise the game more. * First and foremost and literally the most important stuff that you aren't doing is Advertising the game. Advertising the game more surely boosts the popularity of the game let's people know that a game of this caliber this exist. I have seen and played much trasher games that are so bad but are earning more than enough thanks to advertisements. I'm sure you can take out some budget to advertise the game to the larger audience. * Adding Uncensored Version on Global exactly as it is on KR. Destiny Child for Tap is basically a trap which tells you that it's uncensored but actually it isn't. It's only partially uncensored. If Destiny Child KR with Uncensored stuff can be put on PlayStore then why not the Global one. There may be a reason behind it and I don't know about it so I'll shut up. But you guys advertised the Tap version as uncensored even though it isn't fully uncensored as it should've been. Trust me the moment you announce DC is getting uncensored as same as it is on KR, this game will boom. * Expanding the community outside MOOT. I've said it several times and I will say it again. Get out of MOOT, this app is over. It's done. It's dead. Find another platform to grow the community. I don't think even more than 100 people are active here. Find another platform, do consider Discord as a platform for DC again. You'll see a significant difference in the community again. I say with surity the player base will increase. * Reduce Shop Prices. I have seen some people leave this game right at the start because of enormous prices of Stuff in the Shop. The thing is, new player does not know, that you're so generous in after game. They see the prices in shop first, they leave. I know you want to make money, and every game does. No one likes to work for free and you and we are same. The shop prices are literally too high that most of the people ignore. Since DC always gives so much stuff for free, people hardly ever find the need to buy something from the shop. Even if someone wants to buy, the prices are YES, overpriced. Devil Pass is another story and also priced literally very high. I'll explain later how to counter it. * COLLABS will increase the enjoyment and will also attract new players. I know you've done very few Collabs because you're quite picky which is alo because you wait for something that fits the theme of the game. But anything can fit into DC if you draw them like that, which I'm sure you are super capable of. You can always Collab with any other popular gacha game right now. Which will let people of that certain game that this game exists and then they will compare, some of will stay loyal to their game, some will move over to DC, some will play both. In all cases, it's a win-win. You'll get more players And more players who already play both game will be more excited. I do have suggestions like: NieR Reincarnation Azur Lane Epic seven etc. Or create a seperate post asking the community which they would like you to Collab with etc. The game i have mentioned are currently earning more than DC and I think collaboration with these will surely make their player base try DC also. * Remove Blood Gem Summon totally. I think There's literally no point of that in the game. I don't think someone is dumb enough to spend their Blood Gems on summons. Most people spend that in HoR. In exchange to this, I suggest introducing Skin Banners. Yes, Skin Banners, like there are Rebirth labyrinth skin and pactmaker skin. I would suggest introducing Blood Gems Skin Summons (But usually limited time exclusive which may return in reruns every few months or so) so people will get FOMO (fear of missing out) of not getting them. Like regular childs in Bikinis, swimsuits, different poses than usual ones but similar dress. The only difference would be you will summon skins instead of childs from Blood Gems. For that Blood Gems handing over amount should also increased by double but also making them hard to get. The amount of Blood Gems obtained from world boss, Narrative Dungeon should be doubled if you want to do this. As soon as blood gems gets harder to get your sales will increase because people will try to buy blood gems in bulk then. The only thing you need to do is reduce the shop prices. 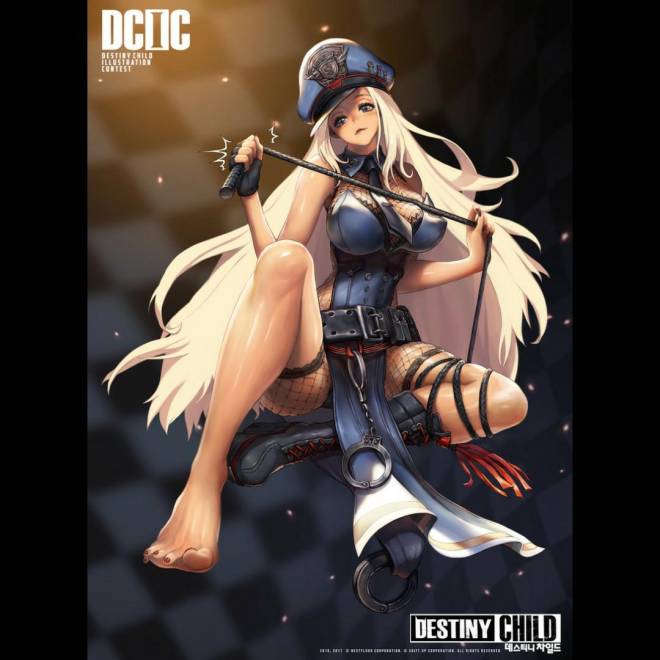 This is an example what you can put in Blood Gems Summon. Make them time limited and be obtainable with blood gems for low costs with SUMMON rates. Call them like "Limited Time Summonable Costumes". While the ones in ReBirth Labyrinth, reduce their Blood Gems Prices or make them also available for Large amount of Crystals. *Marriage system to marry your fave Waifu and get her wedding dress as a reward. (No stats changes) *Game UI, stabilisation and sorting feature like stuff that are available on KR should also be synced across all the variants of DC. * Reduce the Cluttered UI so that child displayed on Home screen gives smooth animation and you can See without any button overlapping it. There are many useless options such as MOOT icon, Facebook icon, TapTap icon right on the home screen. Put that in settings or community section. Put the Friends icon in the Right side options of the screen. 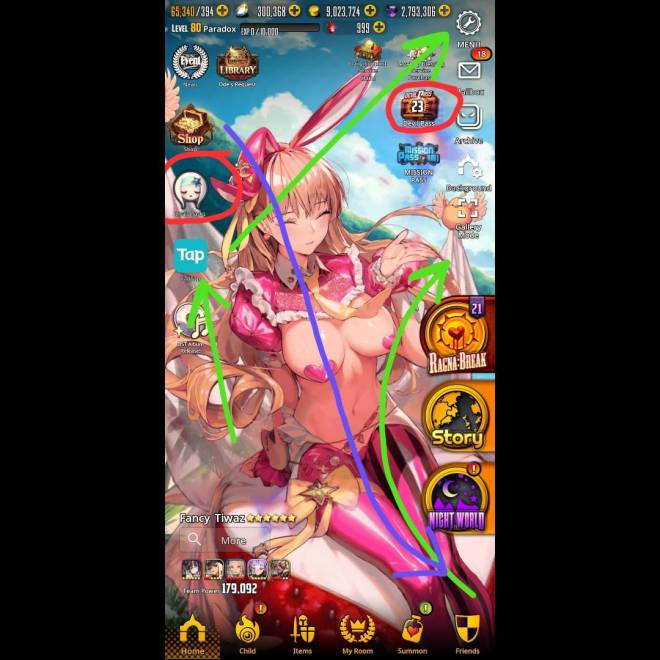 Acc. to this image, I would suggest removing the Friends tab from bottom to where the green arrow leads (right top side, anywhere). And instead of "Friends" tab there, add "Shop" tab there (shown with Purple Arrow). Removing of Official Community icon from Home screen since there's already an option to check official communities in Settings Menu. (Shown with Green arrow). It's not big of a deal but I think it will be good to show as less as possible icons on screen. Removal of Lisa's Mission and Devil Pass from the home screen, since they're already available in "My Room" Tab. Every other icon when an event comes such as Elizabeth's roulette, Moamoa paradice are placed right. * Introduce FanArts also as soul cartas. Make a poll, post them in the community and then ask the community to vote for which soul carta would they like to see in game. * All of the YT chnnels (for the last 2 months) they stopped uploading any videos. I'm talking about all the 3 Channels you have (EN, KR and JP) are dead. Build some engagement. Posting vids about new childs and their drive skills won't cut it. You used to post vids of your staff working. GM doing weird and funny stuff. This is the kind of stuff people like and love. Then after this you started to post only childs and their drive skills and now you just stopped. Make videos like you used to. Create a small team who only does this every once in a while. Make fun vids with GM. Make vids with your CVs (like you used to) Make vids of your staff and how they work. Make vids of the owner talking about the DC itself. (Like an interview telling us about what new can we expect in near future) Make videos and talk about how this new character was made, where it was inspired from. If you decide to create new Community on Discord or Reddit, make videos of that too in the future. Make two people sit and do some meme reviews, fan art reviews on your communities... This will build engagement. * Add KR Voice pack also on Global. *Target other kinks by making new childs or even some skins on them. Not every single person likes Breasts and Asses in the game. Majority of people do like it but look at the big picture. It's just isn't all about Breasts and Asses. Try to target other kinks, other Fetishes people have. Let's take me as example. I have a Foot Fetish. Yes I say it openly, no shame. I would love to see some childs showing off their feet. Similar with their Drive skills. Like there's (Cat Sith) in KR version. And that's it. There's no other. While if you look at other games like Epic7, Azur Lane, Counter:Side etc has around 7-8 characters specifically based and voice overed on kinks people have and that is the reason why some of the people plays these games. Similarly people are into Armpits, Thighs and other stuff. Consider adding some childs or skins Different people have different kinks and if you pick the right spot they shell out the money easily. I know it does sound weird, 😂 don't kill me but yeah I would love to see some child specifically voiced and based on the different kinds of kinks people have (quite possible skins with respective suggestive poses) Following are some of the exmaples what I would like to see. Imgaine these, but in DC style with high quality of work ShiftUp always put hard work into it and when they sell these skins how much profit will they make. NOTE: Images are from another game (a Destiny Child Rip-off) and are here for example purposes only (for suggestion purposes, NO HATE). I'm not suggesting that ShiftUp copy the designs but they can do this but in a better way, which I personally would die for. SERIOUSLY!!! 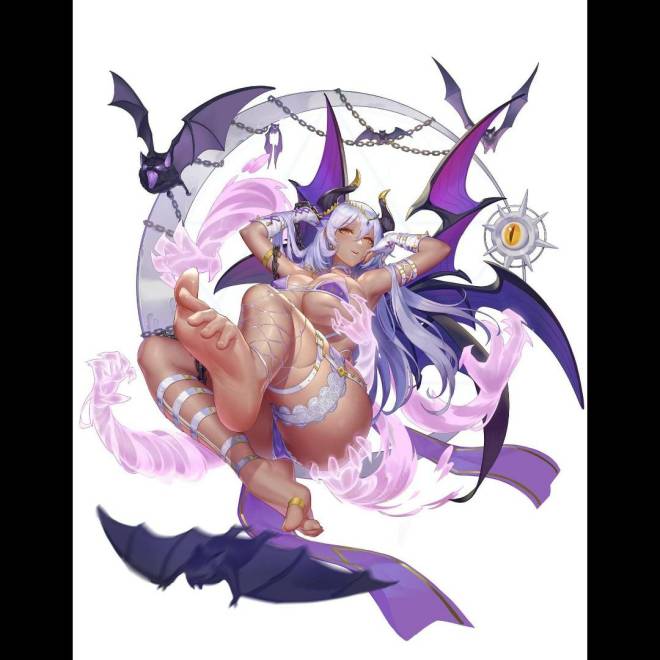 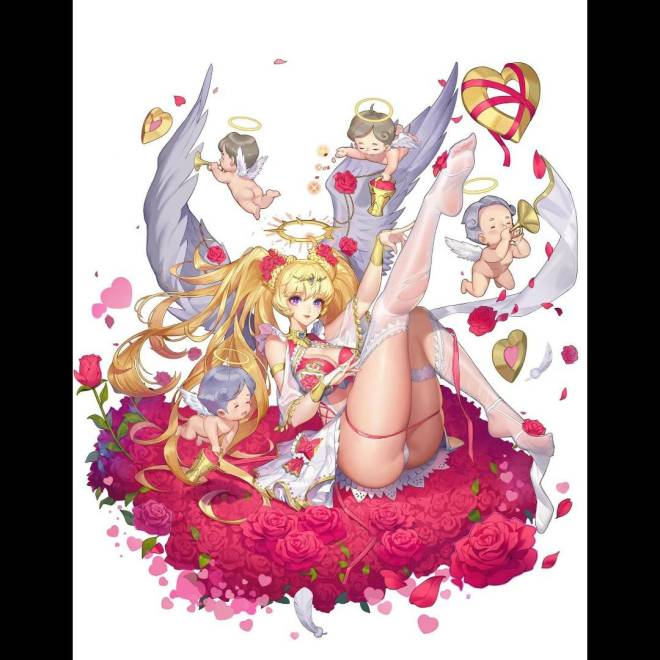 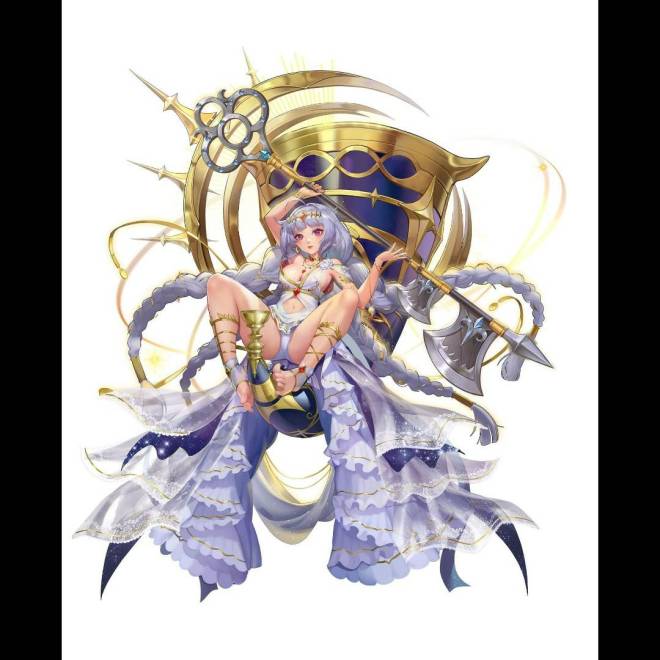 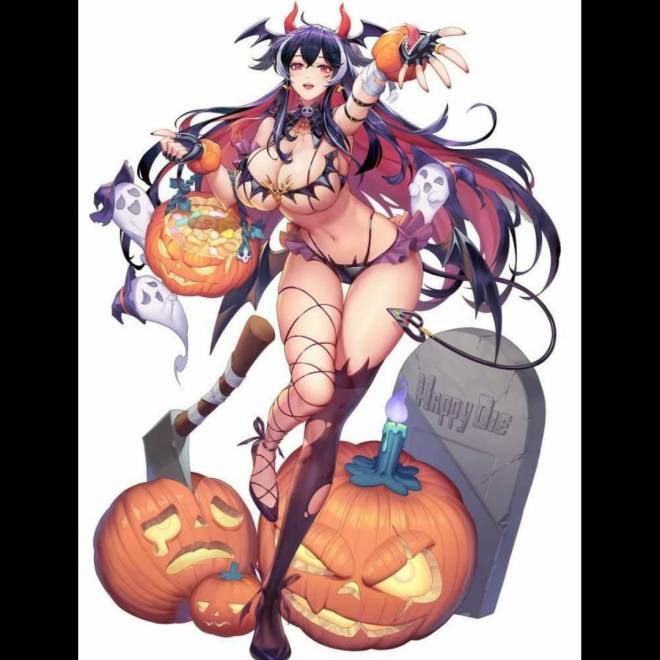 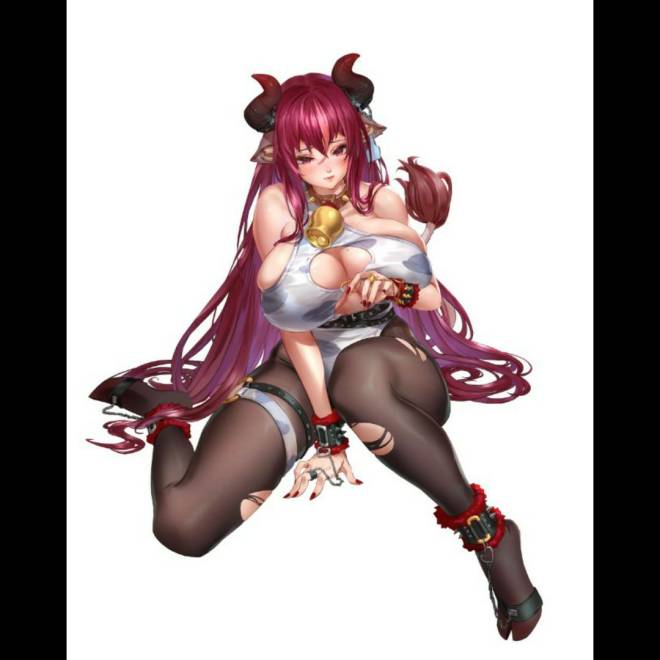 I know these art are not upto the standard of DC, but I have just put it as an example that they can do it better with similar poses. Note: Please feel free to add any more suggestions or critisize my own ideas in the comments. Another Note: If you want to make fun of me because I said I like feet, feel free to make fun of me again. I do not mind. I consider every person reading this an open minded one. But please let me know your ideas on this and add something that you like on this.