Here’s what every Candidate wanted more than anything! You'll meet Krampus, the very first Ragna:Break Season 0. Are you ready for the big Christmas Event?   I can proudly announce Ragna:Break is one of the most important contents in Destiny Child. You will fight in everlasting battle with the Boss during the Ragna:Break season. Plus, more updates are awating you. This list will be updated after the maintenance.   [Child] ■ New Childs are coming to Destiny Child: Krampus, Santa Claus, Rudolph, Fairy, Red Nose, and Gift Bag 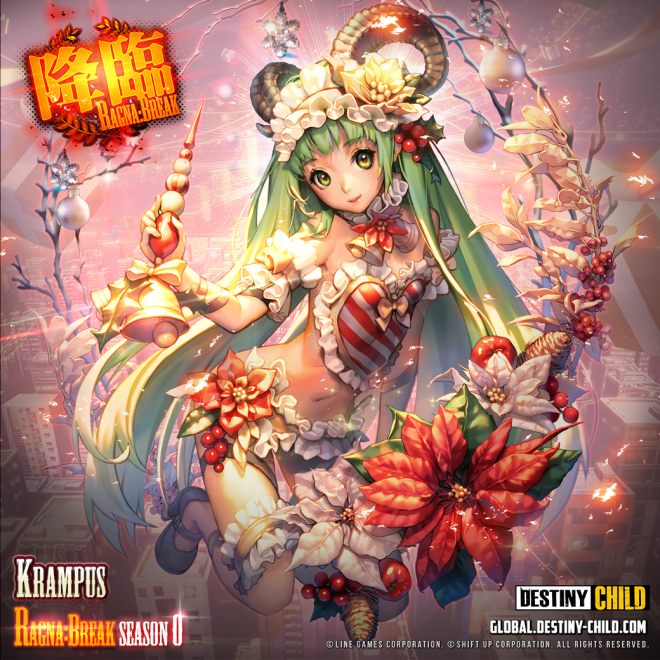 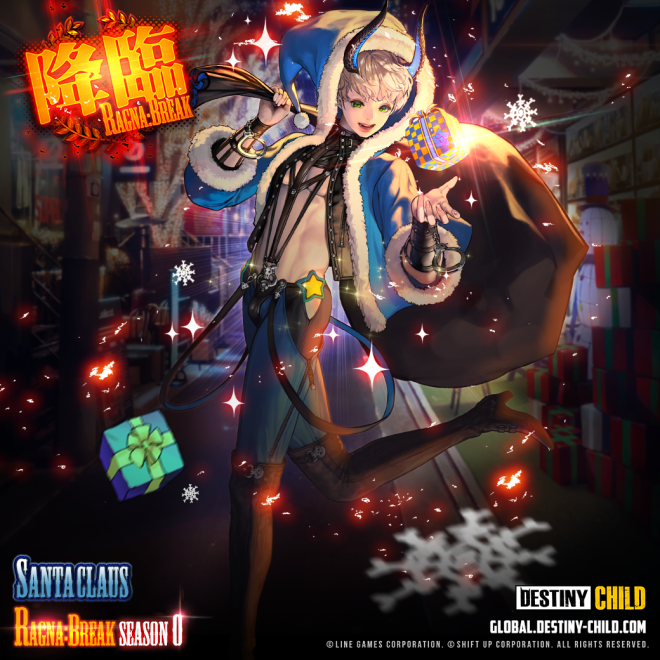 [Ragna:Break] Ragna:Break Season 0 starts with Krampus, the Raid Boss of this season. Defeat the Raid Boss with your friends. Earn Ragna Coins from clearing raid bosses and Raid Story. You can use it in the Raid shop for rewards. The treasure you earn from defeating Bosses include a variety of rewards and even characters. In conclusion, you fight, earn rewards and Ragna Coins, and Shop with the Coins. -Ragna:Break unlocks at Candidate level 12 -Ragna:Break includes Ragna Raid Story Dungeon and Ragna Raid -Ragna:Break only opens during the Ragna:Break season: this time, it is from December 20, 2018 ~ January 10, 2019 04:00 UTC+0 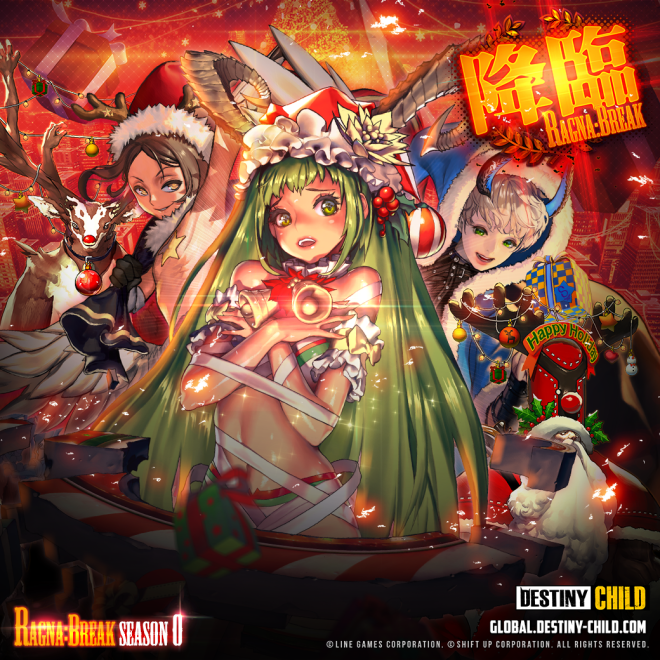 ■ Ragna Raid Raid boss appears in the dungeon! -Each dungeon you clear during Ragna:Break has a chance of causing a Raid Boss to appear. Appearing rates get higher as the as more Stamina is spent. Go to the Story and Raid Story to summon Raid Boss! *NOTE: Raid boss also appears in Raid Story, Story stages excluding Tutorials. -Raid Boss appears it is logged in the Raid List. The list shows the Boss you summoned as well as summoned by your friends -If you defeat a raid boss you discovered, a stronger raid boss will emerge, from Lv.1 to Lv.40 -Rewards are determined at the end of the raid based on a player’s contributions -The discoverer gets a bonus reward every discovered Bosses are defeated, even if the discoverer didn’t give any damage to the boss. But in this case, discoverer’s raid boss Lv. will not increase   Work together with friends to complete Raid!   ■ Raid Story Every Ragna:Break has its own story. On this holy eve, a devil lurks in the shadows of the Christmas cheer. Find out on this season. -Have fun playing the Ragna:Break limited scenarios in the Raid Story -Raid Story requires stamina -You can watch Raid Story again at Bar Replay in the Night World   ■ Raid Shop Special items can be purchased with the Ragna Coins, earned from the raid. The Ragna Coins you earned, you can buy something special with the Ragna Coins! -Buying all of the main 4 rewards on the top will unlock the free final reward. Upon claiming the final reward, new main rewards and final reward will be available. Need 100 Crystals to reset the catalog Check the catalog!     ■ Ragna Mission Complete the mission to get more bonus!     ■ Ragna Rank The Candidates who dealt the most damage to a Lv.40 Raid boss will be listed. -Ragna Rankings are determined by the amount of damage dealt to a Lv.40 Raid Boss in a single battle. Please check the notice how to determine the rankers in Ragna Rank tab -Of course, the rankers will get special rewards! Find out what is waiting for you in this Ragna:Break! Try and challenge all Archfiend Candidate damage rankings   ■ Slayer Rank When you defeat the last raid boss(Lv.40) you discovered, you will become a qualified slayer and be able to participate in slayer raids. Play slayer raids and be sure to earn daily reassure chest. You have a chance to obtain Bronze Chest by clearing Lv.20 or lower raids, Platinum Chest by clearing Lv.21 or higher raids.   NOTE: Slayers, do not forget to check “Slayer Raid” button to get Slayers reward(Reset time: every 4am UTC +0)   -Start Slayer Raid You can use slayer calls during a slayer raid. When a slayer call is used in a raid, it will be registered as a slayer raid, and you can receive help even from Slayers who are not your friends. If everyone helps, even powerful raid bosses can be cleared.     [Event] ■ Premium Pickup Summon: Medb, Hades, Chang’e, Hermes (until January 3rd, 2019 4:00 UTC+0) ■ Dungeons of Volcano(Fire Enhancement&Evolution Dungeon) opens every day during the Ragna:Break ■ Mona’s Emergency Support! She wants to give some help on your very first Ragna:Break ■ New Year Celebration: Mini Shop is on sale. All battle boosts are only 1gold each! (Auto Drive, ATK +10%, DEF +10%, HP+10%) ■ Three Ragna:Break special Events are coming! Don’t forget to check on moot tomorrow! Clear The Last Chapter, Beat the Ragna:Break, and Ragna:NEXT Break 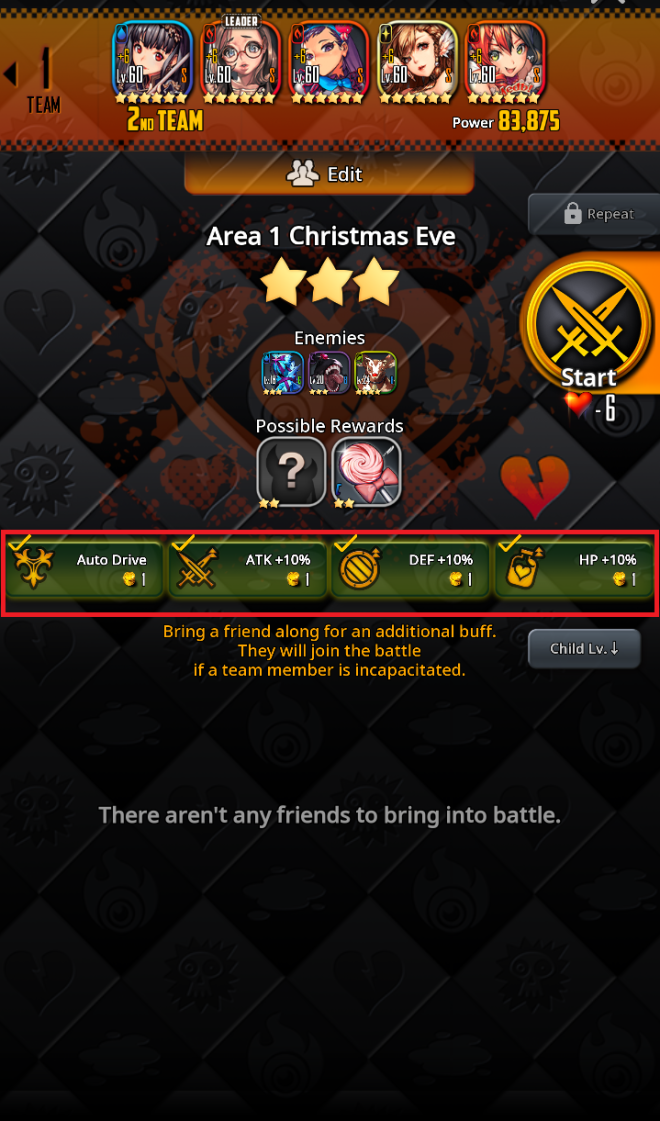 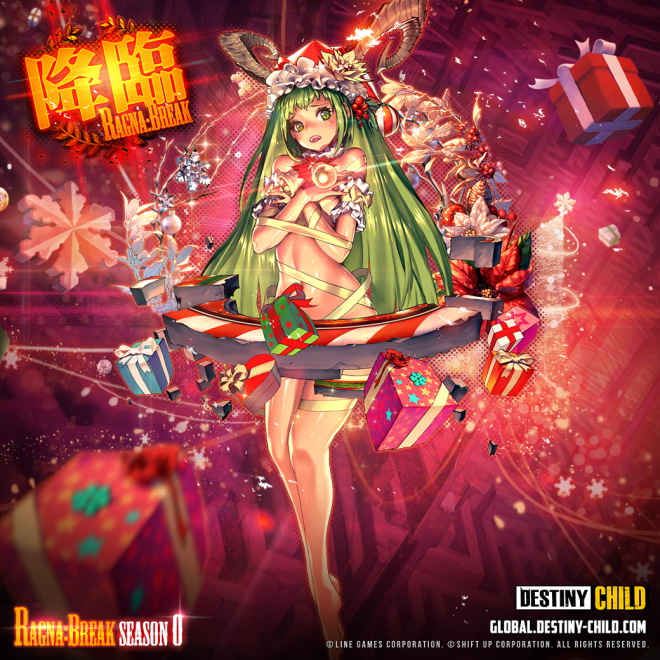 ■ New limited package: Nurture Package, Launching Special Package, and more! Check on Lanfei’s Shop! Until January 3rd, 2019 4:00 UTC+0     [Bugfix, improvement] ■ Level-up material Dungeon will be shown on the top in the screen in Event Dungeon ■ Moot GOTO: Now you can easily check on moot for news and information about Destiny Child! (Menu > Community)   Break your legs, Candidates! See you on December 20th!