1. Hostile Territory   Happy New Year, outlaws in moot! Welcome to the fourth installment of Red Dead Online Guide. Returning from special abilities, I've come back with another guide on one of the modes from the Showdown Series playlist, Hostile Territory. I'm sure a lot of you have already played this probably more times than I did, but for people who have just begun playing it and are clueless, I've come up with a short and comprehensive guide on what the mode is about and how to play it.   ★Please note that the guide is written based on 'Hostile Territory(Large)'     2. What to expect   "Work in teams to control the land. Capture a territory to start racking up points: the team with most points wins - or you can win outright by capturing every territory."   Unlike any other modes in the Showdown Series, Hostile territory focuses solely on team matches rather than a competition among individual players. Players that participate in a match will be divided either into four teams each with eight players inside or eight teams with four players each.   As stated above, the objective is to capture as many territories as possible to earn points which is quite similar to what you'd see in a typical online shooting game. The trick is simple. Just stay inside a designated building you wish to occupy, and it'll automatically be captured after a few moments if only you or your teammates are inside the area. If enemy players invade the same territory, you will be forced to have a fight unless you want to desert the territory you just captured or wish to capture.   3. How should you play it?   1) Don't rush, Think first and run   As how a typical zone capture game goes, you and your teammates are psychologically compelled to occupy the nearest territory possible which is only a reasonable act; however, because teams are randomly assigned to four or eight fixed locations in a given map, a team may capture a territory or two without breaking a sweat and take an early lead, while others may have to fight just to siege a single area. It takes luck to be in such a team with geographical advantages, and it takes skills to overcome disadvantages if you find yourself in unfavorable situations. Bearing that fact in mind, it may be an option to leave the closest territory and fight for the most strategic territory.   2) Attack or Defend?   With one or more territories already captured, it's important to strategize whether to move out and attack or stay and defend. For sure, capturing a territory to earn points is important, but should you let other teams take advantage of your offensive strategy and take over your palace while no one's defending it? In most cases, the answer is, no. The important thing is to not get greedy. As defending your territory is almost as important as capturing one, try not to rush to the next one. Fully utilize vantage points near captured territories for the best defense which is why you should capture offensively to take more than one territory in the first few minutes and focus on defending them for the rest. Surely, capturing all territories is a tempting option, but the chance is slim especially when there are 8 teams in a match. Defensively, long range weapons really do come in handy. As enemies respawn, they'll most likely rush to you to take what once was theirs. You can easily shoot them down if you find the right spot in the map.   Lastly, cooperating is the key to an easy victory. When facing multiple enemies at once, it's best to stick together, and when the stakes are low, your team can divide into two or more groups, one for defending and the rest for capturing.     4. Map analysis   There are a total of five maps, and I've only managed to review only three of them which are 'Blackwater,' Hearland Oil Fields,' and 'Rhodes.' The rest of said maps are 'Tumbleweed' and 'Bolger Glade' which I did not go over as I lack enough experience to do so.   ● Each team is represented with a different color ● ✔️ indicates territories you need to capture   1) Blackwater 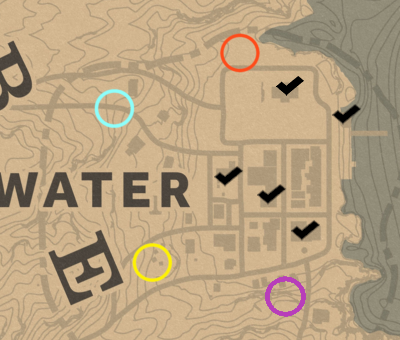 Blackwater is infamous for being an unbalanced map. The orange team can take an advantage of having two territories in one go, while other teams are struggling for one. Also because there are many objects to cover yourself near the ticket office in the right corner, other players will have a hard time penetrating the defense. In Hostile Territory, usually the team with two or more territories takes the victory which means a match may lean towards the yellow team's favor right from the start.     2) Heartland Oil Fields 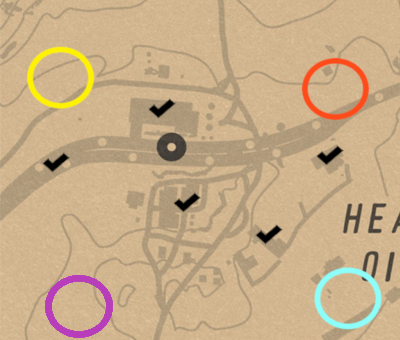 Heartland Oil Fields is as unbalanced as the Blackwater map. The yellow team is awfully close to both territories in the railway and a building near it. The orange and blue team will capture one of each near them and likely to fight to each other which only leaves the purple team. The purple team is the most far away from all territories and will try to occupy the one in the center which I assume they do so; however it's easy for the yellow team to sabotage them and capture as it's the next closest territory to their first two territories. All in all, the yellow team has the most advantages.     3) Rhodes 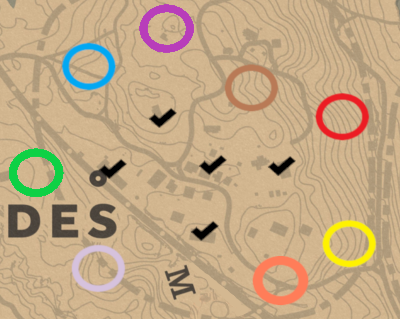 Unlike other maps, 8 teams compete in Rhodes map with only five territories. Because there are so many teams in a single map, we can't really tell which team has more advantages than another. It can easily become a total mayhem. The brown team seems likely to capture one without a fight. However, because the territory closest to them is exactly in the center, it can make them an easy target. Depending on how a match plays out, the green team may have the best chance to take an early lead as they can capture the one closest to the railway without facing a threat.   As these map analysis are mostly based on my own experience in Red Dead Online, you may find the information subjective and misguided. That being so, it's important for you to find the best strategy by trying it out for yourself for many hours.   ---------------   RDO Guide comes back on every Wednesday! Stay tuned for more, mooties!     #RDOGUIDE #SHOWDOWN #UGH #WEDNESDAY