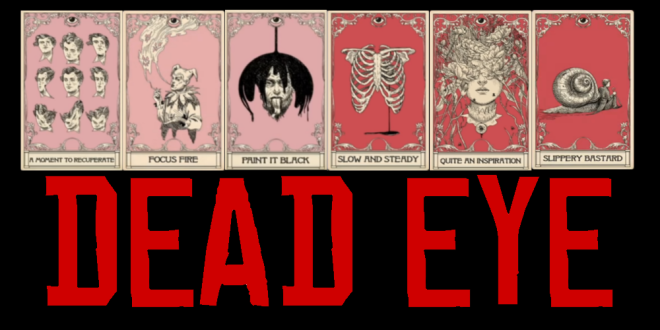 There are three important things you should consider when it comes to competing against other players. The number one is of course the understanding of what mode and map you're playing in. Each mode requires different strategies, and visualizing the map will help you occupy the high ground, similar to how other online shooting games work. Another thing you should always remind yourself to do is dodging. By pressing the square(X for Xbox) while holding down the aim button, you can dodge enemies attack which could potentially save your life from getting headshots. Last but not least is using Dead Eye and passive abilities. These abilities are the gems of your Red Dead Online experience, and I'm here to guide you through a number of abilities available in the game for your better Red Dead Experience.   As many of you already know, there are a total of 4 card slots for you to assign ability cards. The first slot is for a Dead Eye ability and the others are for passive abilities. If you wish to check on my guide on passive abilities, please click the link down below: 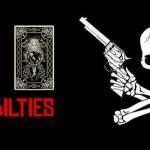 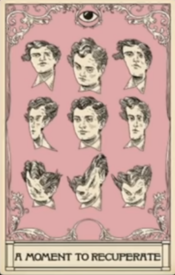 ★While Dead Eye is active, you slowly regenerate health. Taking any damage will cancel Dead Eye.   First things first, when you finish the tutorial in Red Dead Online, you're given an opportunity to assign one of three available Dead Eye ability cards which are 'A Moment to Recuperate,' 'Focus Fire,' and 'Paint It Black.' While it's undeniably true that these cards will help you tremendously as you progress, but as you rank up, the first three abilities will feel somewhat mediocre compared to unlockables. At least that's what I think.   'A Moment to Recuperate' is an ability with health regeneration. Since there's a better version of this ability card, 'Quite an Inspiration' which unlocks at rank 44, if you're looking to use a character with high recuperation until then, this is the one for you. Because you're not allowed to use all passive abilities and their slots as they're locked for low-rank players, there are limitations to what you can use during the battle, and there isn't much to consider until you reach rank 50. I recommend using 'Come Back Stronger' and 'The Unblinking Eye.' Soon after, you'll be able to unlock the last slot and all the other abilities needed, and you'll no longer feel the need to use this ability.     2. Focus Fire 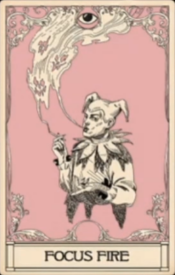 ★While Dead Eye is active, you and your team members deal a little more damage. If more than one member of your team has this ability active, the effects do not stack.   Unlike 'A Moment to Recuperate,' 'Focus Fire' concentrates on dealing more damage to your enemies. As a sole offensive Dead Eye ability, there are no other substitutions for more DPS. This is the one to go if you want to maximize the damage you deal. My recommendation for passive abilities is 'Peak Condition,' 'Eye for an Eye,' and 'Cold Blooded.' This setup is to deal more damage with the ability to heal yourself in battles. If you choose to play shotguns, 'Landon's Patience' may be a good option to consider as it's the best option for short range combats. The closer your target is, It raises the damage you deal.   Personally, I don't use 'Focus Fire' as it doesn't feel efficient when it comes to dealing players in the Showdown Series. A shot to the head always kills enemies in one go under the premise that they're not using Dead Eye or 'Never Without One.' As enemies will fall under one or two shots to the head, for the moment, survivability seems to be main thing to consider rather than dealing more damage.     3. Paint It Black 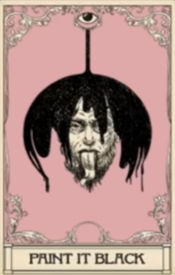 ★While Dead Eye is active, you can paint targets onto enemies. Fire your weapon to shoot all marked targets. Each shot drains Dead Eye.   'Paint it Black' is a classic Dead Eye ability that lets you target and mark enemies for precise shooting. While it is true that it is easy to use since this is the ability you've been using all along in the singleplayer mode, it may not be appropriate when you're competing in the Showdown Series where fast shooting and dodging are crucial to winning matches. This ability may come in handy when you're using a tomahawk in 'Name Your Weapon' or a bow and arrow or throwing knives in 'Make it Count.' As this ability is by no means tied to any characteristics of passive abilities, feel free to make your own set of cards that fits your taste.   4. Slow and Steady 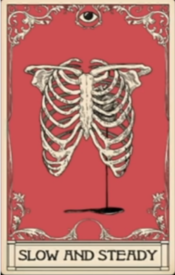 Unlockable at rank 24   ★While Dead Eye is active, you take a little less damage and headshots do not kill you outright. You cannot run or sprint.   As I've told you in the last post about passive abilities, Slow and Steady combined with appropriate abilities will make your character very tanky. Using 'Eye for an Eye' to recover some of the Dead Eye meter and 'The Unblinking Eye' to make it last longer will be helpful to keep the ability going. For the last slot, I recommend choosing either 'Come Back Stronger' or 'Cold Blooded' which would help you get your health back. You can also consider 'Strange Medicine,' but note that its demerit may slow your health recovery. You might think it's a good idea to equip this with 'Never Without One' as your hat gives you a second chance from headshots, but in the Showdown Series, hats never regen once you're killed for the first time. Because you receive more damage afterwards without a hat, I wouldn't consider it a feasible option. I haven't tried it myself, but if you can change your set of abilities during a match, it might be worth a try to switch abilities after you lose your hat. Let me know in the comments if anyone has ever tried so.     5. Quite an Inspiration 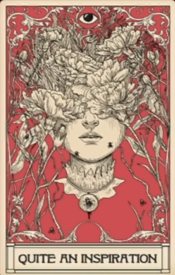 Unlockable at rank 44   ★While Dead Eye is active you and our allies slowly regenerate health. If more than one member of your team has this ability active, the effects do not stack.   Compared to 'A Moment To Recuperate,' this ability is a much better version which allows both you and your teammates to heal as well as the ability to heal while getting shot at. As much as this sounds suitable for PVPs, I don't recommend using this ability in the Showdown Series, for the fact that it doesn't allow you to avoid getting killed by headshots. Because most players are likely to aim for your head in most situations, it's better to utilize 'Slow and Steady' to mitigate the damage or 'Slippery Bastard' to hinder other players from aiming for your head. It may be an option to use this card with 'Never Without One' to prevent you from getting killed from a headshot, but I'd like to think it's better for you to use other cards than to waste a slot for passive ability and endure its drawback. 'Quite an Inspiration' is therefore more suitable when you're playing against computer A.I. in missions with friends. With this card, I recommend you choose passives with defensive or healing abilities, 'Come Back Stronger,' 'Cold Blooded,' 'The Unblinking Eye,' and 'Take the Pain Away.'     6. Slippery Bastard 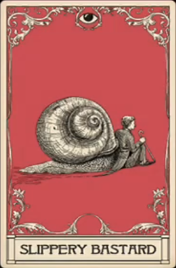 Unlockable at rank 50   ★While Dead Eye is active enemy players cannot lock onto you, and you cannot lock onto them. Other enemies are a little less accurate when shooting at you. The rate at which your Dead Eye drains is dramatically increased.   Slippery Bastard works better when you're facing inexperienced players. Since most players depend their shooting skills on aim-assist, their reflex forces them to aim and shoot the moment they spot an enemy. Exploiting such a psychological behavior combined with 'Slippery bastard' and dodging, it's easy to trick players to miss shots. Just remember to use it intermittently between dodging and shooting so that you can save some of Dead Eye meter for later. The recommended passive abilities are 'Come Back Stronger' 'To Fight Another Day,' 'The Unblinking Eye.' The reason I put 'Come Back Stronger' is that even though your opponents won't be able to benefit from aim-assist, they will be able to hit you through free-aiming, and it's safe to have at least one recovery ability in case you get severely damaged which is also the reason I put 'To Fight Another Day.' It's to mitigate the damage you're taking while avoiding attacks from enemies. As for other recovery and combat abilities, you'll be less likely to use them as you are going to be deprived of aim-assist as well as enemy players while the ability is in active. Lastly, 'The Unblinking Eye' is for prolonging the duration of the ability.     ---------------     Please do remember that Red Dead Online is still undergoing its beta. There's no definite meta in RDO as of now other than a few suggestions. To top it off, more content is in development, and surely, this guide will eventually go past its time and will get outdated. Nonetheless, I hope this guide helps you on your journey to find the optimal setup for your character. What matters the most is how you decide to play it rather than following the trails of others. As always, Happy Gaming!     #RDOGUIDE #ABILITY #UGH