The long waited Red Dead Online is now here, and it comes with five different competitive modes to enjoy along with its own original storyline and stranger missions. I've put a link below to help you understand the general concept of each mode. 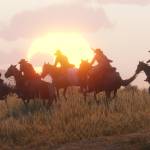 Red Dead Online Beta Launch - Rockstar Games The Red Dead Online Beta is launching this week with early access beginning today. We are easing our servers and systems into handling the increasingly larger player base by scaling up the online population throughout this week – until Friday the 30th –… www.rockstargames.com

One thing to note out of said five modes is that there is a Battle Royale mode called, "Make It Count." Many of us here on moot have expressed their worries in the lounge, saying how adding a br mode in the game would feel redundant and no longer creative while others have welcomed it happily. Fret not, however, for it isn't a typical br game you've been playing all along. Make it Count mode offers features that are quite distinctive, and you need a new strategy to claim the win accordingly. I've taken the liberty of playing a few matches ahead of you, and here's what I've found out.   *Please note that the online is still in the early stage of beta, and changes will be made once it officially releases.   1. The duration of a match   Currently, Make it Count mode has a time limit of ten minutes which we don't usually see from other br games. In addition, the total number of players allowed in a single match can only go up to 32 which makes each match very short compared to other games where you have to survive against a hundred players with longer time limits. You can either join a match with a maximum of 16 players or 32 players, and there's also a four man squad match with 16 people.   2. One Hit, One Kill   The most distinguishable feature the mode has to offer is that it's designed to kill an opponent with a single shot which explains a lot about the name of the mode. Missing a shot can be fatal as your opponent can kill you just as easily. Although, it doesn't slow time anymore, using the Dead Eye ability certainly helps when you want to nail a precise kill. Just be sure to remember that in one on one situation, don't use the ability as it's faster to just aim and shoot. I recommend using it only when your opponents are facing the opposite direction from you or when you have the high ground.   One other thing you should be aware of is that as opposed to how a multiplayer shooter goes, players will aim to survive in a given map but with a forced weapon. Not only are you allowed to use a bow and knives, you'll start with only one of them according to what suits you the best. To put it simply, if you're good at handling bows, go for a bow and arrows and vice versa.

3. No Shooting, No Looting?   For the moment, the mode only allows you to use either throwing knives or a bow and arrows. While it is true that the mode does not require you to loot serious weapons and attachments to obliterate your opponents like you do in Fortnite, PUBG, and et cetera, you still do have to loot your opponent's body for more arrows and knives as your enemies will be quick to evade your attacks. At the beginning of each match, you'll be given only six ammos, and additional supplies will be lootable from killing. We are unsure whether there will be options that would let players use firearms in the future. However, additional content seems evident as we've experienced such updates from Grand Theft Auto Online multiple times.   4. Stealth is the key   As mentioned above, players allowed in a match are fewer than other games in the genre, and the map itself isn't really big. Plus, considering that a single blow from your opponent is lethal enough to kill you, the more enemies you face, the less your chance to survive becomes. With all that in mind, it's only reasonable to stay behind the bushes until the chance is right. Of course, you can always choose to go all out in the beginning, but the chance of winning will get a lot slimmer as enemy players will concentrate their fire solely on you. As previously stated, using the Dead Eye ability will come in handy when you want a clean stealth kill.   #RDOGUIDE #UGH #MAKEITCOUNT #BATTLEROYALE