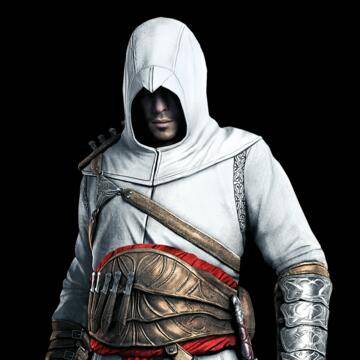 Altaïr Ibn-La'Ahad (1165–1257) was born to a Syrian-Muslim father, Umar Ibn-La'Ahad, and his wife, Maud, who died of complications during childbirth. Umar was later executed by the forces of Saladin when he was revealed to have participated in a disastrous mission to assassinate the ruler, which resulted in Umar killing a nobleman who had caught him. He allowed himself to be executed and the last thing he heard was the voice of his son crying for him. As the years passed, Altaïr grew to be a skilled Assassin, so he had to lose a finger. He once led the retaking of Masyaf after Al Mualim, the Mentor of the Order, was captured, which earned him the respect of his fellow Assassins. He was then sent on a mission to Solomon's Temple to recover a hidden artifact. The mission was a failure, as Altaïr broke the tenets of the Order and left his fellow Assassins to face the Templars alone after he was thrown from the room by Robert de Sablé. Altaïr fled to Masyaf to report his failure but was followed, resulting in Masyaf being attacked by the Templars. The Assassins were able to fend off their enemies, but Altaïr was punished by being stabbed by Al-Mualim. Altaïr later awoke and discovered that he had been stripped of his rank, but was told by Al-Mualim that he would be able to recover it if he could kill nine Templars in the Holy Land. Altaïr was able to assassinate the first eight, then discovered that his last target was Robert himself. He then made his way back to Jerusalem where he met Robert. However, as he removed the helmet of the Templar, he found out that he had not faced Robert but a woman. He allowed her to live and she told him that Robert had made his way to Arsuf. Altaïr followed and finally killed Robert, who revealed that Al Mualim was actually using Altaïr to obtain the Apple of Eden, a powerful artifact left behind by the First Civilization. Altaïr returned to Masyaf, where Al Mualim confirmed what Robert had said. Altaïr, aided by a number of other Assassins, fought his way to Al Mualim, who had used to the artifact from Solomon's Temple to enslave the people of Masyaf. Altaïr and his mentor battled each other and Altaïr finally killed him, taking his place as Mentor. After these events, Altaïr eventually began to study the artifact, known as the Apple of Eden, and recorded his findings in a journal known as the Codex. He also married Maria Thorpe, who was the decoy of Robert de Sable, after he convinced her to defect to the Assassins. He had two sons, Darim and Sef Ibn-La'Ahad. During this time, Altaïr used what he had learned from the Apple to create new techniques and innovations for the Assassins to use. He later journeyed in 1222 to Xia province, China, with Maria, Darim and Qulan Gal to assassinate Genghis Khan. They returned ten years later to discover that Abbas, Altaïr's rival, had usurped control of the Order. Abbas tried to force Altaïr to give him the Apple, revealing that Sef had been executed and told that Altaïr had ordered it. Angered, Altaïr used the Apple but Maria told him to stop, resulting in her being stabbed by one of the Assassins loyal to Abbas. Altaïr and Darim fled Masyaf and Altaïr fell into a deep depression. Years later Altaïr retook the Order with the help of Assassins led by Tazim Al-Sayf, the son of Malik. He began rebuilding the Order, splitting it up into small "guilds" located around the world and began construction of a large library hidden under Masyaf, sealed by five keys containing his memories. When Venetian explorers, Niccolò and Maffeo Polo arrived in Masyaf after they were invited by Altaïr and Darim, he told them of his experiences and put into action his idea of dividing the Assassins into smaller groups with their help. Later, Masyaf was attacked by Mongols and Altaïr helped the explorers escape by using the Apple to fend off the attackers. He then divided his books by giving some to the Polos and sending some to Alexandria. He also gave the Venetians the memory keys to the library, before sealing himself into the library along with the Apple after saying goodbye to Darim. While in the library, Altaïr recorded one last memory on a key he kept with him and died moments after. His remains were found centuries later by the 16th-century assassin, Ezio Auditore da Firenze. #ACHistory If you want to read more about Altaïr, use the link below 👇👇👇 https://en.m.wikipedia.org/wiki/Altaïr_Ibn-LaʼAhad 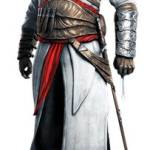