I found this great article interviewing Richard on the conception of Artifact and what inspired him. Definitely a good read: 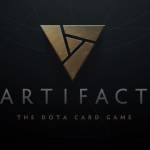 Artifact Developer Interview - Why They Chose Dota, How It Influenced A Card Game, and Artifact's Standout Features While at PAX West 2018, I had the chance to talk to Richard Garfield and Jeep Barnett about Artifact, why DoTA was the right fit, and what sets it apart. techraptor.net

The most interesting point to me in the article is how Richard felt about electronic card games. In short, he says that he felt the current popular online card games are too simple. He would play a game of MTG and have a board of 30 creature tokens that cannot be replicated on screen. Essentially that's what drove him to make Artifact as complicated as it is, cause he wants to replicate the same feeling of playing on paper in the virtual world.   There was a part in the article that confused me a bit. I remember reading something a while back stating how Dota wasn't needed to create Artifact. Richard had already came up with the idea for his online card game, Dota characters and lore just happened to be a good fit. The article says Dota was a big influence to Artifact... so I'm guessing the older information is wrong?