Happy Friday Mootigans! In this week's episode, we talk about the disaster waiting to happen that is Battlefield V. Specifically, we talk about how long it will be until the game actually gets a battle royale mode. Check it out! 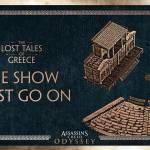 3. World of Warcraft Classic Demo Will Limit Players   The World of Warcraft Classic demo is available to play today, but there’s a limit. Players will only be able to play for a total of 60 minutes with a 90 minute cooldown. Basically, if you play for 60 minutes you’ll need to wait 30 minutes before you log back in. This will enable as many people as possible to get a chance to test the Classic demo with (hopefully) functional servers. World of Warcraft: Classic demo will limit players to one-hour sessions at launch Blizzard is limiting playtimes to ensure that everyone has a chance to try it. www.pcgamer.com

4. November Clash Royale Balance Update   This month’s update is a fairly juicy one with very little unwarranted balances. Headlining this month’s update is a -9% hit points nerf to the Royal Ghost. The Royal Ghost has been extremely popular recently and had been teetering on the side of OP, so this is absolutely good to see. Check out the full list of all the buffs and nerfs and let us know in the comment section if you think it is fair or not! [News] Balance Update Coming (11/5) - Royal Hogs, Tombstone, Giant and more! • r/ClashRoyale The way we approach card balance in Clash Royale is a combination of playtesting, listening to the community and looking at the stats. You can... old.reddit.com

5. Hitman 2 Official Launch Trailer Featuring Sean Bean   The official live-action launch trailer for Hitman 2 is so good we should let it just speak for itself, but that’s not our style around these parts. Sean Bean plays the role of The Undying, the game’s first Elusive Target. One week after Hitman 2 launches, you’ll be tasked with hunting down and killing Sean Bean. Although he seems to die in every role he plays, we’re sure he’ll still put up a fight. Watch the incredibly awesome minute long trailer below! Hitman 2 releases on PlayStation 4, Xbox One, and PC on November 13th.