In all honesty, the Dark Souls series, in my opinion, is going to go down as one of the greatest modern games of all time and this is due to the fact that it continues to influence other games. More specifically, the Dark Souls series is so awesome because it's dark, hard as fuck (in general), and it forces you to learn how the world functions. Dark Souls gets difficulty, AI (they are hard, but not unfair), and game mechanics right. While not all of the Dark Souls games are equally amazing, and this includes Demon's Sous & Bloodborne, FromSoftware is an amazing developer who cares about their games.   This is going to make many of us sad, but FromSoftware is going to be taking a break from making Souls games. I'm glad that FromSoftware is taking a break from making Souls games to bring us a proper sequel to Dark Souls 3. I'm looking forward to their 2 games that they are developing, which are Déraciné & Sekiro: Shadows Die Twice.   With those things said, I'm going to mention some of my favourite moments in the Dark Souls series. For me, and probably for others as well, my favourite moment is the first time I ran into the very first boss in Dark Souls 1. At first I was like meh it's just another dragon type monster, so bring it on Dark Souls 1. Boy was I wrong lol that boss whooped my ass many times until I grew a pair and learned the game mechanics. Another moment is playing against other players, facing off against a guy with no armour, and then having said player destroy me. It could only be a Dark Souls game that allows for a naked guy with a stick to destroy people with a terrifying ease. My third and last favourite example is that of never trusting treasure chests again because they can be a trap lol.   My hat is off to you FromSoftware for making such amazing games that have permanently scarred me for life lol.   Some awesome memes: 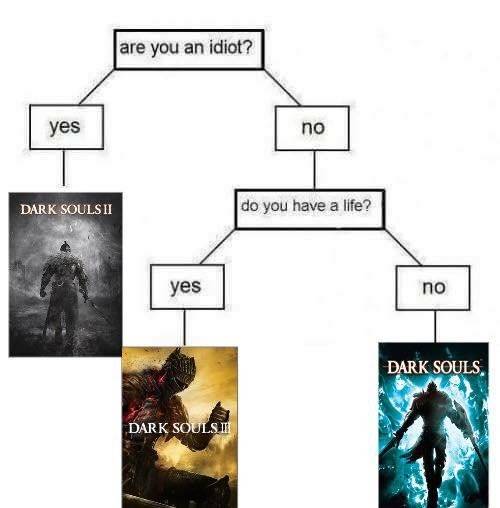