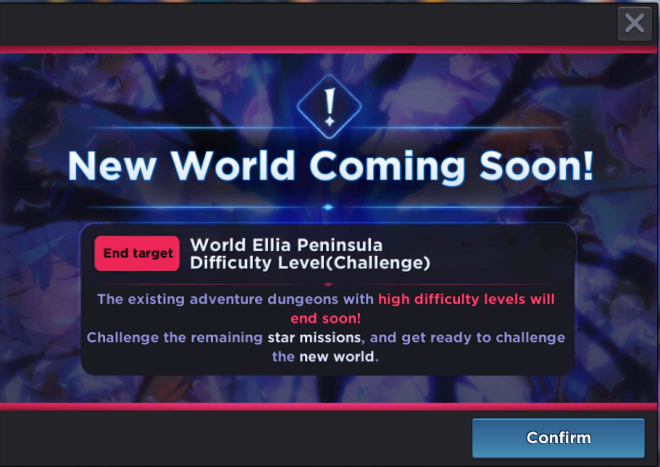 By now, many of you have bypassed all the trials (and the Challenge Mode Difficulty) that Ellia Peninsula had to offer, congratulations are due, because it can’t have been easy. But the story continues: an all-new World is coming to the game soon, and we encourage players to wrap up all difficulties before Ellia Peninsula’s dungeons are adjusted in difficulty.   ■ Difficulty Adjustment Target: World 8 - Ellia Peninsula ■ Further Details:   -World 8’s difficulties (Normal, Challenge) will be merged into one general difficulty upon the release of World 9. -As the difficulty of World 8 is merged into one, all Missions, Challenges, and Rewards of the existing World 8 Challenge difficulty will be gone, so it is recommended to clear all of the World 8 Challenge difficulty ★ missions before the release of World 9.   As always, please keep an eye on Moot for further announcements.   Chase On! -GrandChase Team