Hello Chasers!   Welcome to Part 2 of the October Update dossier. If you’ve already gone through Part 1, read on for updates, expansions, and adjustments to content!   If you’ve navigated to this announcement before reading the previous one, please click on the link below to head back to Part 1.~   Dossier: October Update Part 1 https://moot.us/lounges/401/boards/1895/posts/5454998/notice-dossier-october-update-part-1   [Update Info] 4. Content Improvement and Expansion   [Adventure Dungeons] ■ Players can now check the attribute of monsters that appear in each dungeon. ■ For the boss stages, players can check both the attribute and the class of the boss. 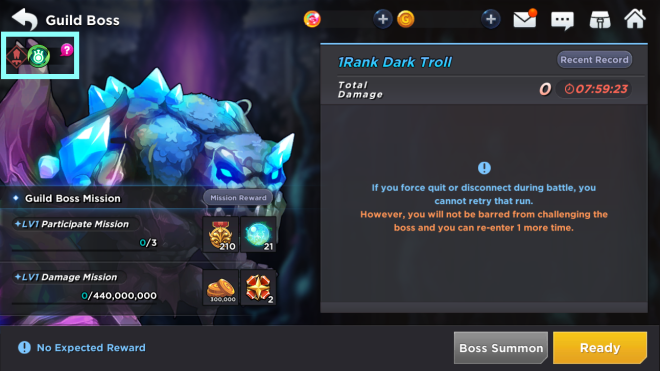 ■ Guild Boss Ranks will be adjusted. (Before) Max 32 Ranks (After) Max 8 Ranks - Rank Unlock Requirement: If the Damage Mission for the current rank is completed, the next rank will be unlocked. - All guilds will start from Rank 1 after the maintenance on October 11th.   ■ Guild Boss cannot be defeated and will be active for eight hours following being summoned. - Guild boss will automatically perish eight hours after being summoned   ■ Guild Boss Participation Mission and Damage Mission will be added, and rewards will be adjusted with the change. - All mission rewards will be calculated and become available after the summon ends. 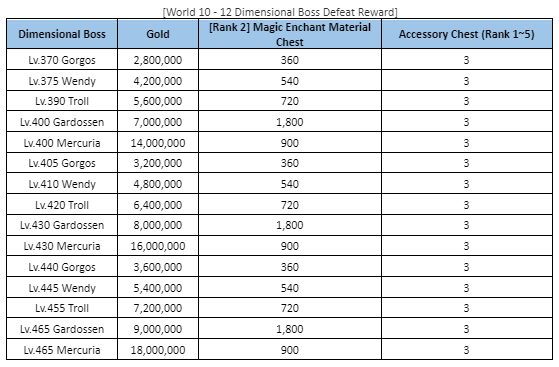 ■ The border ‘Expert of Strength Control’ available from Dimensional Bosses can no longer be obtained.   ■ The option Game Option > Game Setting > Vibration Notification > ‘Alarm after Dimensional Boss Battle Ends’ will be deleted.

[Wizard’s Labyrinth] ■ Players can check the attribute of monsters before entry. [Defense Mode] ■ Monsters with an attribute assigned will all have that attribute. ■ A new rank will be added, expanding the total to Rank 6.   ■ ‘Chaser Crystal’ Clear Reward amount will be increased. [Annihilation] ■ Players can check the attribute of monsters and bosses before entry. 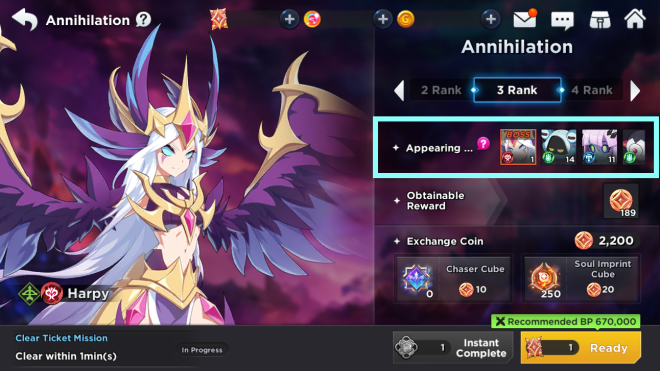 [Wanted] ■ Monsters that appear will be fixed to 1 kind per level and will have 3 different attributes. Players will have to select an attribute that they wish to go against. [Weekly Content] [Dimensional Chasm] ■ Each dungeon will have an attribute assigned and has been revamped to provide rewards when a set number of monsters are defeated within the time limit of 3 minutes. - There are 11 Ranks total, and each Rank has 3 dungeons of different attributes. - Monsters will appear endlessly for 3 minutes and become stronger over time. Even after the target number of kills has been reached, the player will not be able to clear if they quit in the middle of a battle or exit the game abnormally. ■ Players can edit their party before entering Dimensional Chasm and can only enter after deploying their party. - Duplicate Heroes and Pet can be deployed. ■ Reward acquisition method will be changed. - Players will be able to obtain ‘Normal Reward (Support Weapon Crafting Materials)’ that can be obtained 3 times a week. If players reset using Gems, they will be able to obtain the ‘Normal Reward’ 3 additional times. There are no restrictions on the number of resets, but the cost of gems will increase with each reset. The reset cost of Dimensional Chasms will reset daily.   - The sum of all monsters defeated across the dungeons will contribute to the ‘Bonus Reward (Support Weapon Crafting Materials, Support Weapon Random Box)’ Bonus Reward can only be obtained 1 time per week per Rank. (Cannot be reset with gems)   ■ There will be an 80% damage increase bonus buff to all dungeons every week. - ‘Physical Damage 80% Increase’ or ‘Magic Damage 80% Increase’ will take turns getting applied every week. - All heroes in the dungeon will receive the bonus effect.   ■ Corrupted Gaian’s Hero effect (Reward +20%) will be maintained. - Please note that the bonus effect applies only to the normal reward amount and not the bonus reward amount.   ■ The seals that were available from the Dimensional Chasm will no longer be obtainable.   ■ The number of Dimensional Chasm Clears in Likability Missions will be adjusted.   (Before): - Clear Dimensional Chasm 5 times / 10 times (After) - Clear Dimensional Chasm 3 times / 6 times   ■ Players will not be able to enter this content from October 10, 2022 (Mon) 00:00 – October 11, 2022 (Tue) before maintenance.   [Raid] ■ Single and Dual Raids will have attributes assigned per rank. - Easy, Normal, and Hard difficulty will all have the same attribute for the same rank. [Hell’s Furnace] ■ Attributes will be applied based on the stage of the dungeon.   ■ Vulcanus Subjugation will have the same attribute assigned for 2 stages.   ■ 4 new ranks will be added, expanding the total rank to rank 12. - Vulcanus will be empowered further starting from Rank 9.   ■ Players will be able to use up to 14 party preset settings.   [World Boss] ■ Each phase has an attribute assigned, and each dungeon has magic / physical debuff.   ■ Players can enter from Monday to Sunday.   ■ World Boss entry requirement will be changed. (Before) - Phase 1: Possess 8 or more +6 Awakening Heroes - Phase 2: None (After) - Phase 1: None - Phase 2: Possess 8 or more +6 Awakening Heroes [Challenge Content]   [Boss Attack] ■ Each Boss has an attribute assigned.   ■ Rewards from Boss Attack will be changed. (Before): 3 kinds of Soul Fragment (After): 3 kinds of ‘Accessory Upgrade/Promotion Materials’ * The new [Accessory Growth System] will be detailed in Part 3 of the October Update dossier. ■ Soul Essences can be obtained by crafting through Chaser Crystals. - After the update, any leftover Soul Fragments are converted to Soul Essence Summon Ticket based on the number of fragments. (Please craft the fragments into Soul Essences before the update.)   ■ Any leftover Boss Attack Entry Tickets before the update will be converted to 20 Chaser Crystals per class and sent to mail.   ■ New Boss Attack Entry Tickets will be created every 8 hours and will be recharged for up to 15 tickets.   ■ New Boss Attack Entry Tickets can be purchased 10 times daily in the Entry Ticket Shop using gems.   ■ The requirement to unlock Boss Attack will be changed. - (Before): Clear World 4 [15-6] ‘Sloth of Yellow Appears’ Dungeon - (After): Clear World 8 [27-9] ‘Demon Kamiki’ Dungeon   ■ Boss Attack debuffs will be removed. - The dungeon debuff assigned to each boss is removed. - The debuff information in Boss Selection Screen, Text when entering battle, and Pause Screen are removed. 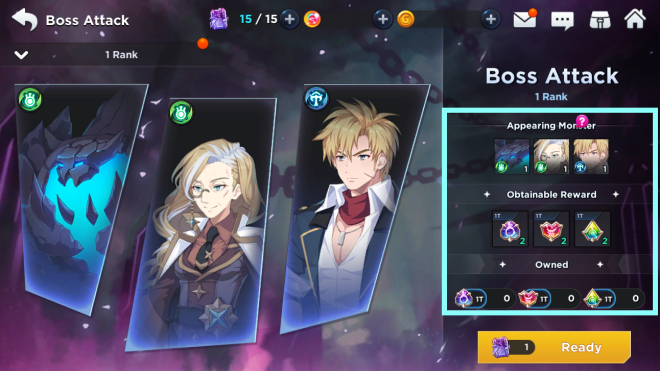 [Altar of Time] ■ Each dungeon will have an attribute assigned.   ■ 2 new ranks will be added, expanding the total rank to rank 9. Players will be able to obtain Rank 4 Artifacts. [Trial Tower] ■ Each rank will have an attribute assigned. 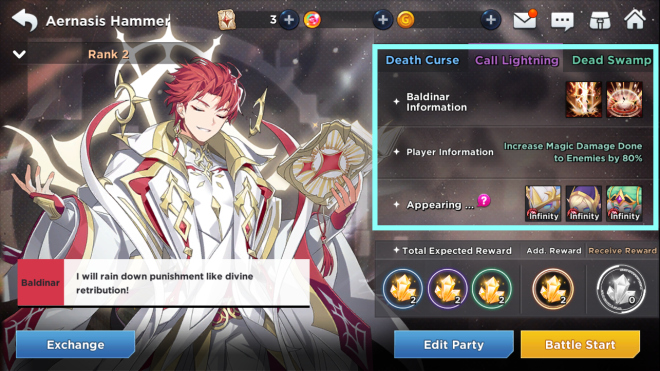 [Berkas’ Lair]   ■ Attributes are assigned per Berkas’ Source of Power, and both difficulty and buff are expanded. (Rank 3 → Rank 4) ■ Berkas Boss Fights will have a different attribute every season.   [Nightmare] ■ Each Nightmare Boss will have an attribute assigned.   [PVP Content] [PVP Balance Adjustments] ■ PVP content stat adjustments will be made. - Contents: PVP, Arena, Guild War, Guild Tournament   - Stat Adjustment Before: Damage 30%, Healing 30%, Shielding 30% - Stat Adjustment After: Damage 15%, Healing 30%, Shielding 30%   ■ Cycle and Ruin Attribute Assault, Ranger, and Mage Heroes’ PVP Damage will be enhanced. - Target Heroes: Dio, Sieghart, Europa, Lapis, Ragnar, Harpe, Nelia   (Arena) ■ Attributes for Heroes deployed in Arena will be displayed. ■ Arena matchmaking rules will be changed. - (Before): Matchmaking is done based on the party with the highest Battle Power - (After): Matchmaking is done based on the battle power of Attack and Defense for Arena   ■ Arena content unlock requirement will be changed. - (Before): Clear World 3 [13-9] ‘The 3, Reunited Again’ dungeon - (After): Clear World 6 [22-9] ‘Dignity of Demon God’ dungeon   [Contents with Attribute Not Applied] ■ The following contents are not affected by attributes - Side Story Dungeon - Soul Temple   That’s it for part two, click the link below to proceed to the final part of the October Update dossier: Dossier: October Update Part 3 https://moot.us/lounges/401/boards/1895/posts/5455000/notice-dossier-october-update-part-3 Thank you for your continued support of the game!   Chase On! -GrandChase Team