Nintendo and Game Freak's Pokémon franchise has gone through many changes, none bigger than the shift from 2D to 3D. Which era of games was the best?   Anyone who's ever had any experience with gaming likely has a positive Pokémon memory. With 24 years, 20 main games, many anime seasons, and a ton of sp-off titles under its belt, every gamer likely has a "childhood Pokémon " game.   Moreover, no two players will have the same thoughts on the franchise as a whole. This idea makes Pokémon a phenomenon more than a series. Likewise, this is also why every release can cause a divide among the community. For instance, are 2D Pokémon games better than their modern 3D counterparts?   10 2D Is Best: It's Like Being In A New World   9 3D Is Better: The Games Felt Modern   8 2D Is Best: There's A Lot Left To The Imagination   7 3D Is Better: Devs Go All Out With Graphics   6 2D Is Best: Predominantly Single-Player   5 3D Is Better: Multiplayer Is A Natural Component   4 2D Is Best: Classic Pokémon Was Mysterious   3 3D Is Better: Modern Pokémon Taps Into Novelty   2 2D Is Best: Min-Maxing Is A Niche Community   1 3D Is Better: Grow Old With Pokémon   https://gamerant.com/nintendo-pokemon-games-2d-3d-better/ 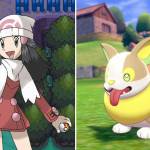 5 Ways 2D Pokémon Games Are The Best (& 5 Why 3D Are Better) Nintendo and Game Freak's Pokémon franchise has gone through many changes, none bigger than the shift from 2D to 3D. Which era of games was the best? gamerant.com
SEARCH Pokemon POST