US Customs has seized 86,000 bootleg Pokémon figures, worth an estimated $600,000, hidden inside a shipment arriving from Hong Kong earlier this week.   Which is fine, that happens all the time, and fake Chinese stuff is violating trademarks, so this is literally Customs’ job. But instead of just saying that the figures are fake and will be destroyed, Customs felt the need to issue some strange and frankly self-owning statements to go with it?   Working with the trademark holder, CBP confirmed that the figurines were counterfeit. CBP import specialists appraised the shipment at $603,936. Officers seized the shipment for violating U.S. intellectual property rights. The parcel was destined to an address in Snyder County, Pa.   The figurines are small and pose a potential choking hazard to your children. Additionally, counterfeit toys tend to be coated in excessive levels of lead paint. No lead testing was conducted on these toys.   “In addition to protecting the trademark holder’s intellectual property rights, Customs and Border Protection’s primary concern with counterfeit consumer goods is the potential harm they can cause to American consumers, such as the choking hazard these figurines pose to children,” said Michelle Stover, CBP’s Port Director for the Port of Harrisburg. “CBP officers remain committed to working with our consumer safety partners to protect American consumers by seizing dangerous counterfeit goods at our nation’s ports of entry.”   So they pose a choking hazard, but then, so do the actual figures you compared them to in order to get a “street value” of $600,000? And they “tend to be” covered in lead paint but you didn’t even test them? Maybe these weren’t!   https://kotaku.com/customs-seizes-86-000-fake-pokemon-toys-for-very-weird-1843575301 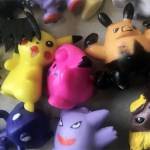