There is currently too much RNG involved in everything related to very personal stuff - your build choice and how you desire to play your character.   Now, I will say the "death of a thousand cuts" present in the game as a result of a combination of bugs and imbalance regarding enemy types and encounters definitely highlight this issue more - but after thinking about it, that's a good thing, because this issue is an underlying problem, that even if some of those things got fixed and changed, this issue would still be present - meaning it should still be talked about, even when we are confident lots of those bigger problems will disappear in due time. 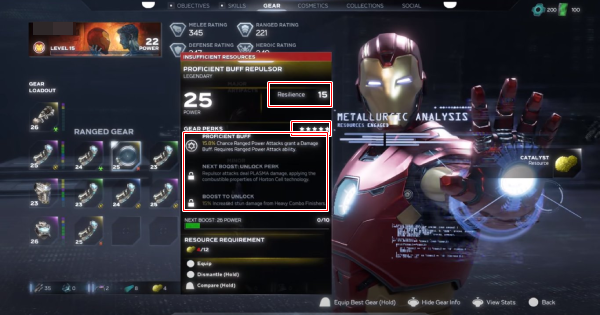 Regarding RNG behind builds - the game doesn't give you anything you actually want, and on top of that, is extremely stingy at giving you higher rarity items that are a clear improvement. The stats presented to you on an item are randomized, unchangeable, and are given to you within a range. They could be a little lower or higher than something with the exact same stats. The star rating value of the gear itself is random, and the game is very unclear about how to affect that, and you also cannot change this after it drops. The star rating seems to impact the % ratios on the innate effects rolled on the gear, and you also cannot change those once you receive them.   Add this all together, and what you get is zero actual choice behind how you want to play the game or to express your given Avenger in terms of playstyle and niche, which becomes more important the deeper into endgame farming and content you go. I say this purely in relation to your gear - your skill trees and mastery choices are very well implemented - the problem is meshing that system with the loot you obtain to synergize a cohesive build. You are totally at the mercy of the RNG to give you a piece or two that synergize, and to be effective on higher difficulties, you simply need to work with what you get, and hope for the best.   RNG primarily dictates what your gear build will be and how you will play, not you. I would also like to mention that even leveling your major artifact relic in an attempt to improve the loot pool by inflating your power level doesn't make YOU stronger, it in fact makes ENEMIES stronger because the power level "upgrade" doesn't improve your stats or your build, and all the relevant endgame content always pushes itself to a higher power level than whatever your current base is. Your "upgrade" makes the game harder for you, and the benefit to doing so is negligible in the long run, besides trying to make your base drops be 130 power. However, even after power 140+, you will still see the occasional 129. I don't see how that's acceptable.   What ends up happening is you spend X amount of time, which could be short or long depending on difficulty and the content you are farming, to get a piece of gear. The current way it goes is, you look at it for 3 seconds to see if any of the stats or affixes present are relevant to the way you WANT to play, and if it isn't, your eyes glaze over as you either destroy it for minimal material gains, or chuck it into storage if you think maybe some other build in the future you can only access when maybe you obtain some other randomized piece some other day could potentially synergize with it.   You exhale, and either reload the same mission or move onto something else.   This creates a compound effect of exhaustion, lack of fun, and impatience. Stack that with the current basic issues of SPIN being way too extreme, ranged damage being way too inflated, even for unmarked basic attacks from normal enemies, the hit reactions induced by almost everything on the Avengers that lead to stunlocks you cannot dodge out of, and the fact that even when enemies pause to do special marked attacks on you, YOU cannot stumble THEM out of the moves, even with some of your hardest hitting/looking attacks. So while you, for instance, can be easily tickled by the slightest damage out of any animation startup, smashing an adaptoid in the teeth from the sky with a power smash as they channel a move on you, does absolutely nothing to them in terms of hit reaction - and then they simply kill you during the recovery, since they have massive superarmor.   In tougher content, this leads to you being swarmed by a million parry/dodge prompts, during which you have no realistic timeframe to deal any serious counter damage, at least not without dying mid-animation, or being stunlocked out of your counterattack by something else, which also leads to you dying. Add in the stunlocking when you do finally make a mistake, the inability to dodge out of stumble reactions, and SPIN often deleting your ability to use a cooldown to try and break yourself out of being wombo combod into losing a star rating - high challenge ratings become a massive pain to sort through and win, especially while keeping a high star rating in an attempt to get a "good" piece of gear. 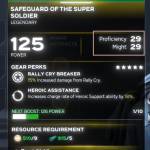 Long review - Why does Gear and late-game farming becomes less enjoyable over time (2) | Marvel's Avengers Continued from the first post.   If you reload a checkpoint in the middle of a stage where you got downed and lost a star, in an attempt to redo the fight and NOT get downed this time - even if you succeed, the game "saves" your down from the previous fight and still will only grant you a 4 star rat... moot.us
SEARCH Marvel's Avengers POST