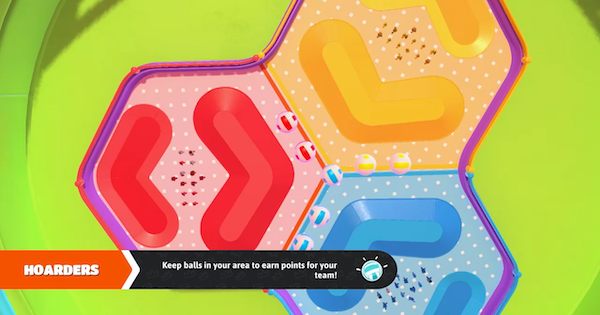 Hoarders   Hoarders is a three team challenge where you try to gather seven balls into your team’s area. (This Round is a lot like Egg Scramble below.) You’ll have to work with teammates to get the balls moving, though.   1. Jumping and diving make you deliver a header to the balls and get them moving.   2. Try to keep the momentum of the balls going, even if it means moving it through an opponent’s area on the way to your own.   3. This game isn’t so much as about winning as it is making sure you don’t lose. Only the bottom team gets eliminated, so towards the end of the Round, don’t worry about being in first. Instead, make sure you’re not last. Steal anything you can from the last place team to keep them there — even if it means giving points to your opponents.

Fall Ball   Fall Ball is a soccer-like game with two teams, two goals, and two balls. Your job is to help your team get more goals than your opponents.   1. Jumping and then hitting the dive button will launch you into the ball with a lot of force. This is a great way to get some momentum going. It’s also a great way to completely miss the ball and land on your face, so be careful with your timing.   2. A single player can do a lot to stop the momentum of a ball, so a goalie never hurts. Just don’t rely on it too heavily, since you’re also pretty slow.   3. After a ball enters the goal, a new ball will fall into the center of the field. Sometimes this ball is an American football, not a soccer ball.

Egg Scramble   or this team game, you’ll be dropped into an arena divided into thirds with a pile of 50 eggs in the center. Each team has to gather eggs and drop them into their nest. The team with the least amount of eggs is eliminated.   1. This game is much more than the initial scramble for the eggs in the center. Once those are grabbed, it becomes a game of stealing eggs from the other teams’ goals.   2. The stealing phase lasts much longer than the initial dash. It’s an utter free-for-all.   3. Make sure your team has at least one person posted near or in your nest to act as a goalie. Grabbing the players trying to steal your eggs for long enough will make them drop their bounty.   Also, there's a different way to play this round.   Check this post.