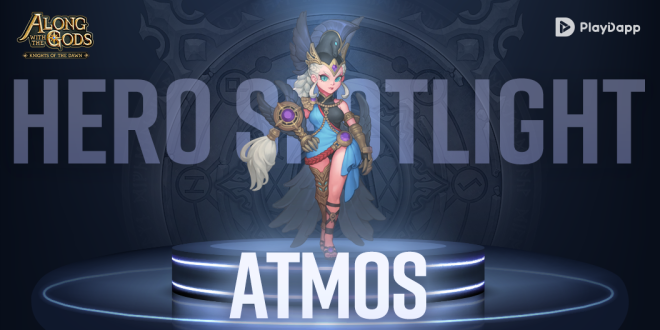 We’re back with another Along with the Gods Hero Spotlight, featuring Atmos!   “One of the Dark Ancient Goddesses in charge of ‘Power’. Although she’s a Death God, she pursues righteousness. She will take action without any hesitation if she sees a cowardly behavior.”

Atmos is a natural 5-star Hero and Ancient Goddess Hero and is by consensus the best Tank Hero in the game. She’s a must have and must use for players who are lucky enough to possess her.   She will be a blue-chip piece in both PvE and PvP, particularly in tough content which requires highly durable Heroes such as high-level Arena matches, Drake Raids and Infinite Tower. Atmos has a number of unique abilities and characteristics which elevate her to elite status within the game, as the best Tank Hero and one of the best overall Heroes.   Read on to find out what makes Atmos so great!   [How to Obtain Atmos]

Atmos can be obtained through a few methods, although she is quite rare and one of the more difficult Ancient God Heroes to obtain given that she isn’t available through Light Shards or Hero Combination like Styx and Alexis, respectively.   Atmos can be obtained via the following Hero Summon Scrolls: Water Hero Summon Scroll, Premium Hero Scroll, Legendary Hero Scroll, Mythical Hero Scroll and Ancient God Hero Scroll.   Your best chance of getting Atmos is through the Ancient God Hero Scroll. You can obtain an Ancient God Hero Scroll by clearing every stage of Scenario on Hell difficulty or completing seven rounds of Hero summoning Mileage at the Temple of Heroes. Atmos can also be randomly obtained through Hero Synthesis using three 5-star Heroes as Synthesis materials.   [Atmos Skills Breakdown]   Atmos has a number of defensive and support Skills that are best in class. She even surpasses the likes of Zemer and Blith, although in specific situations these two Heroes can hold their own against her. Atmos’ Skills giver her an all-round kit that provides the ultimate defense for both herself and her teammates. Atmos provides damage shielding, harmful effects removal, minor Crowd Control, damage boosting and self-buffs.     Her Leader Skill, Victory Roar, increases the Attack Speed of allies in the frontline by 30% and is one of the best frontline Leader Skills in the game, especially for players who don’t possess Shu.

Her Active Skill, Mara’s Calling, is an extremely powerful support Skill which removes all harmful effects on her allies while also granting immunity against harmful effects for 5 seconds and increasing the damage dealt by teammates by 20%.

Goddess’s Army is Atmos’ first Auto Skill which creates a shield that absorbs damage up to 20% of Atmos’ Max HP on all allies.

Power Rush inflicts 200% physical damage to enemies that ignores their Physical Defense stat and Stuns them for 2 seconds.

Dark Force passive removes a harmful effect from each ally with a 15% chance and grants immunity against inability effects for 2 seconds whenever Atmos is attacked.

Biological Armor increases her Physical Defense and Magic Defense by 1% of Atmos’ Max HP.   [Atmos Runes]   As a Tank Hero, Atmos relies on having longevity and being able to provide as much defense and support to the rest of her team as possible.   Atmos in particular will want to boost her HP to help her in general as a Tank but also because it synergizes well with her abilities Goddess’s Army and Biological Armor, the higher the HP the more damage she can absorb for her teammates and the higher her own Defense and Magic Defense stats are boosted.

While Life Runes aren’t normally used on elite Heroes, in Atmos’ case there is a legitimate case for using them over other Rune types to fully spec into HP and maximize her HP stat, especially if you don’t have access to high level Runes of other types.

Warrior Runes are arguably the most universally useful Runes in the game and many players equip Atmos, and other Heroes, with them. Inability Effects can severely hinder Atmos and consequently the rest of your team if her shields and cleansing are delayed. Combined with the Inability Effect Resistance Awakening, Atmos becomes highly resilient against Inability Effects.

Philosopher Runes are widely used in high-level PvP and Atmos is a fine candidate as a Tank Hero to wield them as she doesn’t need to consider other Rune types such as Vampire or Critical Runes like more offensive Heroes.   Some players have also been seen equipping Atmos with other types of Runes such as Evasion and Torrent Runes.   Attack Speed is also an important stat to look out for on Atmos as it determines how often she can cleanse and shield her teammates, and her Leader Skill allows her to boost her and her teammates’ attack rate.   Recommended Rune Bonuses by position: I: HP II: Attack Speed III: Attack Speed IV: HP   Other sub-stats you should be looking to boost on Atmos include Physical Defense, Magic Defense.   [Atmos Awakenings]   In keeping with the rest of the build you’ll want to make increasing Atmos’ HP as much as possible a priority, and then Attack Speed as her secondary stat.

Awakening I: HP This will increase Atmos’ HP stat by up to 20% and make her tougher to kill while also boosting her abilities.

Awakening III: Increase Attack Speed Increases the rate at which Atmos attacks, which will be highly beneficial to your team as Atmos will be able to proc her shield and other useful team support abilities more frequently. This is also highly effective when combined with her Leader Skill which also boosts Attack Speed.

Awakening IV: HP Selecting the HP options for Awakening I and IV, Atmos can gain up to 40% extra HP with fully leveled Awakenings, which is an absolutely massive boost to her utility as a Tank Hero and are undoubtedly the best choices for Atmos.

Awakening V: Increase Team Physical Defense This will make your team sturdier as a whole and synergizes with Atmos’ overall kit, and is more effective overall than reducing your opponent’s Defense by 10%.   [Atmos Accessories]

The best Accessories for Atmos to use are up to a matter of opinion/preference. You can choose to increase her HP as much as possible with a combination of Special and Rare Accessories, for a total of 18% HP increase. Other options for Atmos’ Accessories include Demon Accessories, although these are quite rare/ difficult to obtain.   Important sub-stats you should be looking out for on Atmos include HP, Attack Speed, Physical and Magic Defense.   [How to Use Atmos]   Atmos will be an important Hero in any team looking to increase their odds of survival in Arena mode and PvE modes such as high-level Raids, Scenario and Infinite Tower.

She’s one of the most used Heroes in Major and Team/World Team Arena modes as she provides outstanding utility that no other Tank can replicate. With the appropriate HP boosts from Accessories, Runes and Awakenings as well as Transcendence she can achieve monstrous HP numbers and defensive stats, which make her as close to invincible as you can get in Along with the Gods.   Atmos is a common sight in high-level PvP teams in Major, Team and World Team Arena modes. Many top teams use Atmos, along with Styx or Divana, to form their defensive backbone. She is just as good in PvP as she is in PvE, and will often be the last Hero standing in battle. Her high usage stats just back up her status as one of the truly elite metagame Heroes in Arena mode.   While she doesn’t provide healing, she provides damage shielding and the ability to remove and immunize against harmful effects. Having a Support Hero who can provide healing to complement Atmos’ defensive Skills should form a rock-solid core for your team. In most high-level teams this Support Hero will be one of Styx, Kadus, Divana and Marcus. Atmos and Divana are highly complementary as a defensive pairing as Divana provides temporary invincibility, healing and team Defense boosts while Atmos provides protection from harmful and inability effects. Atmos is very capable of operating and thriving as a lone front-line member of your team.   Atmos fits neatly onto almost any team composition and can shore up any build. She is the ideal candidate to provide defensive cover for more offensive and frail Heroes on the team. Her ideal teammates are Support Heroes with healing as mentioned above, but she also synergizes well with other frontline Heroes if you wish to run a two frontline member team, especially Heroes like Melvin, Shu and Glen.

Atmos is useful in every Raid and is one of the few Heroes who can genuinely perform well against every Boss. She is especially good against Fire Attribute Raid Bosses against whom she possesses an Attribute advantage. Atmos is even a top Hero against Earth Attribute bosses such as Python, Pantahras and Earth Drake, due to her overwhelming array of Skills. Her ability to create damage shields and mitigate the numerous harmful effects Raid Bosses inflict is crucial and can make tough battles much more manageable.

Atmos is an essential Hero for players to have and raise if they want to conquer all of the high-level PVE content. Her abilities are unique and provide support no other Hero can provide as a single unit. They’re universally useful and help in every in-game situation. Just have a look at the most used Hero statistics in Raids and Infinite Tower to see just how useful Atmos is, being present near or at the top in virtually every high-level stage. While Atmos provides great defensive support, her ability to boost the damage of her teammates and Attack Speed of her frontline allies also shouldn’t be overlooked. If you go too defensive with you overall team selection with Atmos in the line-up, you can end up under utilizing her overall talents.   You should keep in mind that Atmos will be your most used Tank overall, so you should prioritize fully upgrading her to get the most out of her.   [Conclusion]   We hope you enjoyed this article and that it helped you learn more about Atmos and that you can use her to her full potential now. Atmos is a unique and wonderful Hero who can greatly improve any player’s roster.   Let us know what you think and how you use Atmos in the comments below!   Bringing you the future of gaming today, Team PlayDapp   Facebook: https://www.facebook.com/groups/AlongWithTheGods/ Moot: https://moot.us/lounges/345/ Twitter: https://twitter.com/AWTG_PlayDapp Medium: https://medium.com/dozerfriends Discord: https://discord.gg/5QMpnJ7 Telegram: https://t.me/cryptodozer_io Reddit: https://www.reddit.com/user/playdapp_io