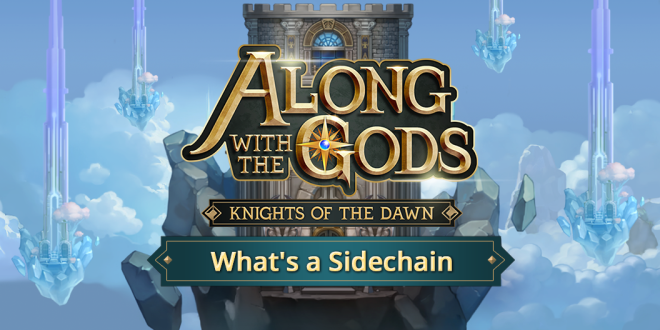 Knights it’s time to take another stab into the world of blockchain tech. This time we’re getting a bit more technical. We’re sure you can handle it! After all, if you can fight for the light, you can learn some technical stuff!

[ SIDECHAINS ]   Ok simply put a side chain is a separate blockchain that is attached to its parent blockchain(mainchain) using a two-way connection.   Stripping it back further, it’s a system where you can move items from one record center to another and back. Check out this awesome and easy to understand diagram, from Hackernoon.

If you want to learn more about specific sidechains you can check out this awesome article by Vaibhav Saini at Hackernoon.   https://hackernoon.com/13-sidechain-projects-every-blockchain-developer-should-know-about-804b65364107

11 sidechain projects every blockchain developer should know about | Hacker Noon The whole world is going through the blockchain revolution. But wait…is this really what we dreamed of? Present transaction rates of bitcoin and ethereum are so low that we can’t imagine to support even a single game , forget about the financial transactions, IOT etc. Here is where sidechain comes t... hackernoon.com

[ SO WHY DO I NEED TO KNOW ABOUT SIDECHAINS? ]   A Sidechain helps to solve one of the biggest issues for the crypto world and blockchain gaming. Speed. When using a sidechain, instead of calculating everything in a single big blockchain, some of it can be offloaded to the sidechain. Thus reducing the need and load on the mainchain. Thereby increasing speed.   Sidechains are also important in that they help to improve the scalability of blockchains in general. This is important for things like gaming where it’s possible that actions will be taken frequently, think creating in-game items like Runes or Characters in Along with the Gods.   [ A BIG EXAMPLE THAT HELPS BOIL IT DOWN ]   CryptoKitties- the once most popular blockchain game at one stage was responsible for 25% of the transactions on the entire Ethereum blockchain. This caused delays and load issues. If they had deployed a side chain, then it’s possible that they would have had a much better player experience for all involved.   [ IF YOU TAKE NOTHING ELSE AWAY FROM THIS ]   Just remember that Sidechains are a way to help create more speed, more scalability and better quality of life in gaming for players.   The Blockchain Version of Along with the Gods is getting closer and closer and we just can’t wait!   Till the next blockchain article, happy adventuring!   Medium: https://medium.com/playdappgames Twitter: https://twitter.com/playdapp_io