Knights, time for another dip into the waters of Blockchain. And this time we’ve got a mouthful of a word for you. 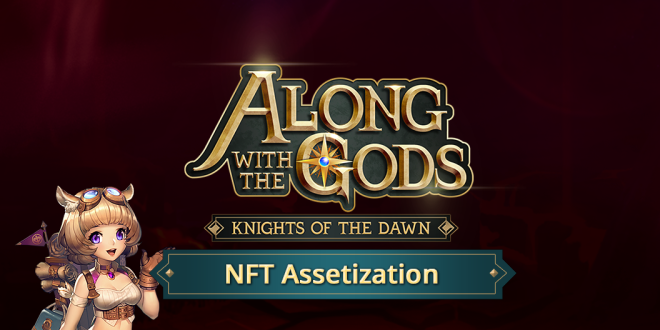 Of course, there’s more! NFT Assetization needs a bit of context for Along with the Gods. Players, what does it mean for you?   For you, it means that items you’ve worked hard to acquire in-game will become NFTs allowing ownership over them and giving you more power. You could keep it, making your time in Along with the Gods more valuable and enjoyable. Or you could sell it to other players earning yourself a nice real-world boost. Or further yet you could use is across the PlayDapp ecosystem, in our interoperable games.   It’s that last one that we feel has the biggest potential impact. A constantly changing and evolving world of games and experiences all for you.   But how does an item go from being locked down and only part of Along with the Gods to an NFT Asset? Well, that’s the secret PlayDapp Magic. We can’t go into all the details just yet, but we can take you through some basic ideas.   Traditional Blockchain games place all items ‘on-chain’ a process that records items on a blockchain. This is ok, however, it can slow some things down, which isn’t the best fit for having uninterrupted fun!   PlayDapp has taken an approach to maximize the fun by allowing items to undergo NFT Assetization while still being in use in the game you collected them. Then after NFT Assetization finishes the inter-operability kicks off and you can go ahead and get into the awesomeness of true player ownership.   On top of this, we’ve approached blockchain gaming with a mixed-asset approach. Not every item will be converted to an NFT. Truth be told, internally we’re working on how best to give you, the players the ultimate choice of what to, and what not to make undergo NFT Assetization. Again, delivering that player choice and ownership over your items!

We imagine a system where you can take items earned in the game and decide to NFT Assetize them yourself. Player control, player ownership, it’s the best bet for everyone!   The Blockchain Version of Along with the Gods is getting closer and closer and we just can’t wait!   Till the next blockchain article, happy adventuring!   Medium: https://medium.com/playdappgames Twitter: https://twitter.com/playdapp_io