Kraken Raid Guide: How to Slay the King of the Deep Sea 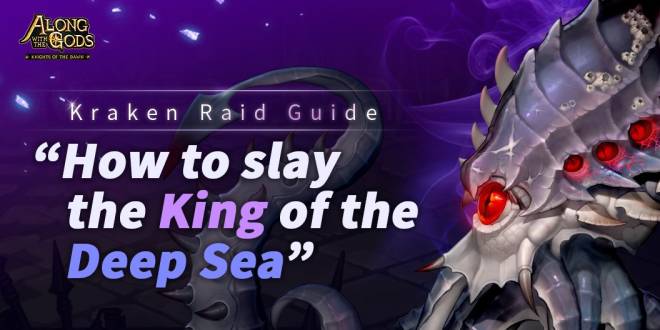 Hello Along with the Gods players! We’re back with another guide for you, this time we’ll be giving you all the info you need to dominate the Kraken raid!   Kraken is a fierce Raid Boss of the Water attribute. After you clear the first 3 stages of mobs, you’ll come face-to-face with the monster itself!

Kraken’s rune drops are Penetration, Vampire, Critical and Patience runes. The most valuable among these are Vampire runes, which are a popular rune choice on many heroes and well worth farming. As with other Raid bosses, Kraken will also drop other valuable items such as Rune Dust, Gold, Evolution Incarnations and Premium Hero Scrolls.   Unlike other Raid bosses such as Havoc or Python, who are more restrictive in which heroes will be effective against them, Kraken is a bit easier to build for and you can be more flexible with the units you use. As a general rule of thumb, heroes who can do HP % based damage are going to be your best option against raid bosses, especially when they have an attribute advantage. In this case, Earth heroes will have the advantage against Kraken.

One of the defining aspects of the fight against Kraken is its ability to regenerate its own health. This means you’ll either have to bring a hero who can block/reduce healing or simply out-damage its recovery, which requires extra firepower and can make the battle a lot longer and trickier.

Kraken deals primarily magic damage so you’ll want to make sure your heroes can survive its barrage of magical attacks. Kraken’s own magical defense is high, so you’ll want to channel your offense through physical attackers, although there are some magic heroes who can still be effective, which we’ll discuss below.   Kraken also has the ability to manipulate the positioning of your heroes. It can push your frontline back and bring your backline forwards, enabling it to neutralize your melee attackers and hit your support and magic heroes with its tentacles which deal physical damage, as opposed to the main body which deals magic damage. Destroy the tentacles quickly to neutralize this threat.   You’ll face various other debuffs and crowd control methods from Kraken, including a debuff which stops your team from being able to receive any positive effects. Its crowd control effects can cause major disruptions to your team so having a hero who can mitigate that and/or equipping Warrior runes on your team will give you a greater chance of victory.   Naturally you’ll want to bring Earth attribute heroes when you aim to take Kraken on. Here’s a list of, and quick rundown on, the best Earth heroes to use against Kraken.   [The Best Heroes to Use Against Kraken]

Lin, a 5-star hero, is the Queen of Raids and the Kraken raid is where she shines the brightest. Her HP % based skills takes huge chunks out of Kraken’s health bar and her armor break enables other teammates to increase their damage output too. You can obtain her through Hero Combination in the Temple of Heroes.

Glen is a powerful 5-star Earth melee hero and his attribute advantage and raw damage output make him a big threat to Kraken. His ability to inflict the Bleed and Stun effects with his attacks is also a huge boost to his effectiveness. The Legendary Chef chops Kraken up in next to no time.

Prospera is a 5-star Ranged character and as an Ancient Goddess you already know she’s going to pack a punch. Her skills, attribute and natural power make her a great Kraken killer. Her Formation Leader skill which increases the backline’s HP by 50% is also amazing for boosting your team.

Peishan is a 4-star Ranged hero whose attacks cause the Bleed effect and the Heal Block effect, which alongside her high single-target damage output makes her tailor-made to destroy Kraken. You can purchase Peishan’s Light Shards in the Arena Special Shop with Team Arena medals. If you want to make light work of Kraken, bring Peishan.

Ardo is one of the best Earth healers in the game and. His natural sturdiness, self-revive ability, and attribute advantage alongside his powerful healer skills, which includes both HP recovery and debuff removal, make him a great choice to anchor your team.

Divana is a stand-out Earth Support hero and can completely block all damage on the team for 5 seconds with her active skill, while her auto skills heal her teammates and removes debuffs. She is a great healer for almost every situation.

René can function as a Kraken killer with the right set-up and support. While she’s not quite as effective as some of the other Ranged heroes on this list she is quite easy to obtain compared to a hero like Prospera and will still do a lot of damage against Kraken.

Patricia is a mage without any HP% based attacks, yet she still proves herself to be one of the better heroes to use against Kraken. Her skills increase the cooldown of enemy attacks and decrease enemy attack speed and energy acquisition which will all severely hamper Kraken. She also has enough raw power to contribute offensively in bringing down Kraken.

Jenia is hugely effective against Kraken and she’s easily obtainable for most players through Hero Combination in the Temple of Heroes. Her attacks deal HP% based damage and combined with her Earth attribute she absolutely shreds through Kraken. If you don’t have access to some of the rarer heroes mentioned she’s a godsend.

Blith is a powerful Earth tank who can easily endure Kraken’s attacks and dish out damage and lead your frontline against Kraken. Blith’s great sustainability comes from his ability to heal himself and his teammates while also being to generate offensive pressure.

Arkhan is another Earth Tank who can help you immensely against Kraken. His high HP and Shield abilities make him able to survive throughout the battle against Kraken and provide support to the rest of your team.   Other Earth heroes such as Floria and Alshara are great against Kraken too. Many of the heroes mentioned above are 4-star heroes and/or obtainable through Hero Combination or purchasable Light Shards which helps make Kraken one of the most accessible raids.   While attribute advantage is an important aspect of Raid Boss battles, many heroes from the Water attribute can also be effective against Kraken too. Oliver, for example, a Water mage, has an auto skill that blocks her opponents’ ability to heal. Turan and particularly Elheim, despite being mages, are also useful against Kraken due to their HP % attacks and attribute neutrality. Zemer and Atmos are highly effective as tanks in the Kraken raid. Most players will also have access to Hellen and she is more than usable as a healer versus Kraken as well. If you have some strong Water heroes don’t be afraid to mix them into your team.   There is also a very limited group of special Fire heroes who can be used successfully in the Kraken raid. Kadus and Styx are both great heroes to use with their amazing support abilities.   [Putting it all Together]   Now that you know how Kraken operates and which heroes are good to use, you need to put them together in a team. For the Kraken raid we would recommend that you have at least one Ranged DPS hero such as Lin or Peishan as a heavy hitter. Having a tank such as Zemer will be beneficial to your team and alongside them you can add a Melee DPS such as Jenia or Glen. If you want to go all-out in attack you can have two DPS heroes in your frontline. The number of support heroes required can vary between one and two, depending on the overall strength of your team and their ability to withstand Kraken’s attacks. If you only need one support hero you can use this as a flex slot, perhaps add another DPS hero to make the battle against Kraken quicker. Try to make sure at least one of your heroes has the ability to block healing.   The goal of building a raid team is building a team strong enough to successfully auto-battle a Raid boss. If your team isn’t strong enough to auto clear a stage every time without fail then you should add another support hero for the extra security, or perhaps change your overall team composition around to see if something else works better. Only then should you aim to clear Kraken as fast as possible. Safety first should be your mantra.   If you’re finding that even with an extra support hero, or tinkering with your composition, that your team is failing to clear Kraken close to 100% of the time, you should drop down a level and focus on strengthening your team.   When farming raids you want to ensure your streak won’t be stopped on auto-battle and then after that ensure you clear the stage as fast as possible for maximum efficiency.   We hope you enjoyed our guide to the Kraken raid and found it helpful! Feel free to leave your thoughts and any other advice you may have as well!   Bringing you the future of gaming today, Team PlayDapp   [Social Media]   Facebook: https://www.facebook.com/groups/AlongWithTheGods/   Moot: https://moot.us/lounges/345/   Twitter: https://twitter.com/AWTG_PlayDapp   Medium: https://medium.com/dozerfriends   Discord: https://discord.gg/5QMpnJ7   Telegram: https://t.me/cryptodozer_io   Reddit: https://www.reddit.com/user/playdapp_io