Along with the Gods' NFT Championship!

Along with the Gods, PlayDapp's popular RPG has been blockchain-upcycled. We're celebrating with an event! 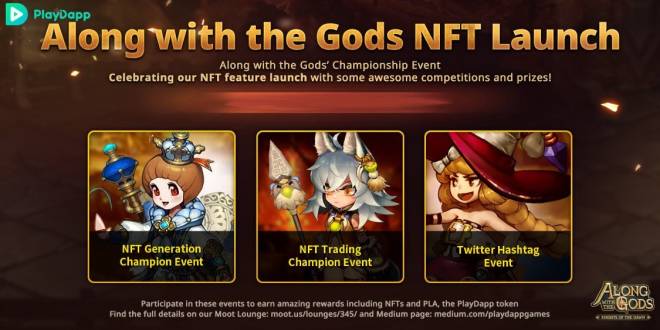 ---   PlayDapp Gamers, have you heard the news? After some seriously hard work, PlayDapp's awesome mobile RPG has been fully upcycled!   A brand new NFT system is in place and with it your chance to experience the awesome world of blockchain gaming. With true Player Ownership, and the ability to play and earn, with our NFT marketplace, playdapp.com.   Make sure you download and install Along with the Gods from Google Play Store to get started!   https://play.google.com/store/apps/details?id=game.playdapp.awtg Even better, we're also celebrating with a fantastic event to help familiarize you with the power that the blockchain gives players! So just what is happening?   --   Along with the Gods NFT Launch Spectacular!   We've got a selection of awesome events for you to enjoy. All of them will reward you for engaging and using the brand new NFT system. Not only that but by using these systems you'll get valuable in-game items, helping you on your journey defending the light! There's also a chance to win some hefty amounts of PLA on the Polygon network!   You'll need to be familiar with the brand new NFT Item Manager that we've launched for Along with the Gods. You can read a great guide here.   https://moot.us/lounges/345/boards/1686/posts/5413367/item-manager-guide 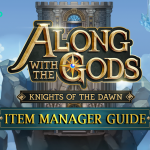 Item Manager Guide | Along with the Gods: Knights of the Dawn Learn how to manage and use your NFT's in-game and on the marketplace!   moot.us 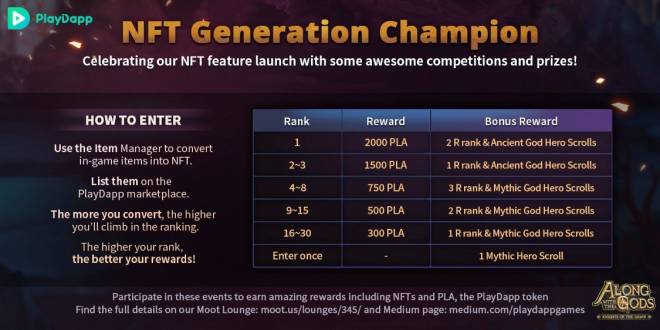 Defend the light and help others to have access to awesome, powerful game items. To become the NFT Generation Champion, you'll need to use the Item Manager to convert in-game items into NFT. Then it's just a simple case of listing them on the dedicated PlayDapp marketplace. The more you convert, the higher you'll climb in the ranking. The higher your rank, the better your rewards!   We'll be running the event for 4 weeks, so it's a marathon, not a sprint. And the best thing is, the more you play regular Along with the Gods: Knights of the Dawn, the more valuable items you'll have to convert to NFT.   To help new players get up to speed and start generating NFTs ASAP, we're going to be giving out amazing rewards to all players that will supercharge their progress through the early stages of the game. Logging in regularly, players will receive Prospera Light Shards, collect enough and you will receive a free Ancient God Hero, Prospera. Players will also receive a bunch of free 4-star Evolution Incarnations, Emperor Earth Eggies and Awakening Incarnations.   You can also read our special Event guide here to get a detailed guide on how best to obtain NFTs in-game:   https://moot.us/lounges/345/boards/1686/posts/5413368/nft-generation-event-guide But that's not the only event Along with the Gods will be running…   --   Event 2 - NFT Trading Champion! 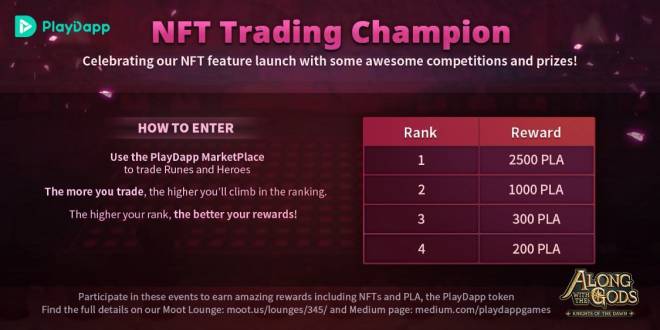 Need a boost to your arsenal of awesome Runes and Heroes? Then the trading event is for you!   Use the PlayDapp marketplace and not only will you be able to pick up some awesome Heroes and Runes, but you'll also be in with a chance of some serious rewards from our prize pool.   Make a successful trade, by either buying or selling any Along with the Gods NFT on the PlayDapp marketplace and you'll be entered once. The more successful trades you make, the more entrants you'll have.   The wallet address with the most trades will claim the top prize and scoop a serious amount of PLA on Polygon.   Use the PlayDapp marketplace to get the Runes or Heroes you need, and you'll be part of this event. Every trade you do will help you gain rankings and unlock better rewards! It's a win-win!   Again, you'll have four weeks to participate, with rewards to winners being released at the end.   --   One more event! Twitter Hashtag Event for PLA! 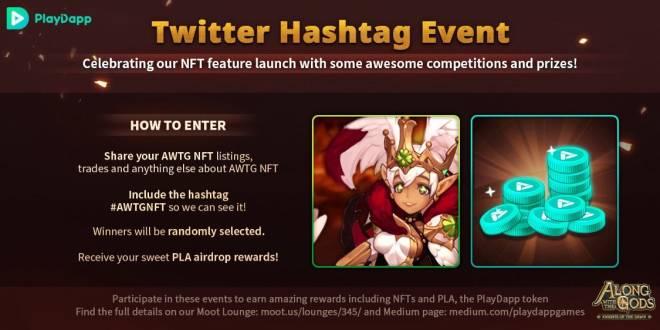 That's right, as we're feeling generous, and we really want to help spread the word about this awesome development, we'll be dishing out mini PLA airdrops to those who share across Twitter proof of their NFT listings or sales, and those who generally are helping to spread the word!   If you're lucky enough to be selected, you'll net yourself 50 PLA just for taking part! The winners will be selected at random and we'll be issuing these rewards throughout the 4 week event period. Remember to include the hashtag #AWTGNFT so we can see it!   Good luck out there! Whatever you do you'll find yourself rewarded, for any time you spend in Along With the Gods.   ---   Social Media   Twitter: https://twitter.com/playdapp_io Facebook: https://www.facebook.com/playdapp.io Medium: https://medium.com/playdappgames Discord: https://discord.gg/5QMpnJ7 Telegram:https://t.me/playdapp_official