Along with the Gods Update Announcement 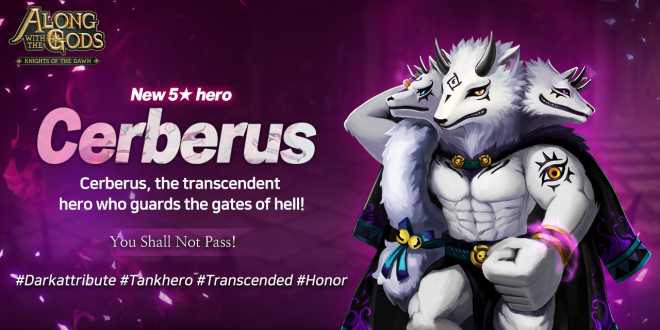 Hello Knights!   We’re here to announce some major game-changing additions to Along with the Gods in this new update!   Players will get to experience the new Honor system which rewards players in a variety of ways, the brand new Heavenly Hero Cerberus, UI upgrades and adjustments to Shop Pack limits.   Read on to find out everything you need to know! (Please note: all images and footage are taken from a test version of the game and may appear and function differently from the public version)   [Introducing the Honor System] 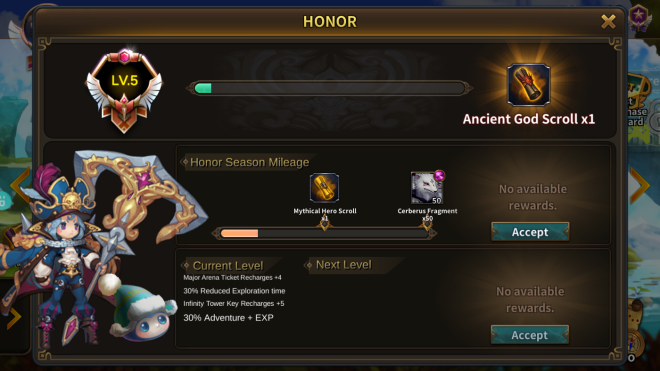 The Honor system grants players some amazing rewards for increasing their Honor level and Honor mileage.   Players increase their Honor mileage and level according to the number of Gems used in-game. This isn’t limited to Gems used in the Shop, and includes all Gems used across the entire game including Key refreshes and stage retries. 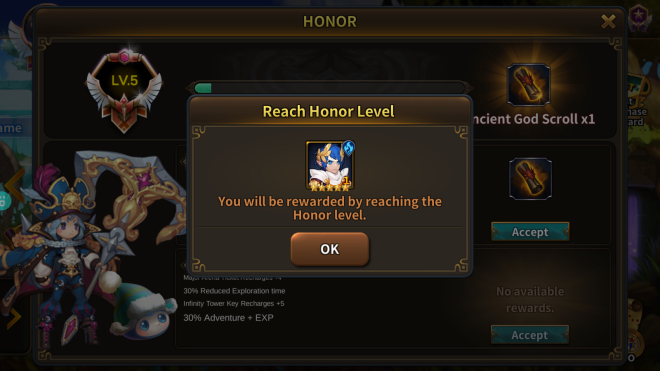 Players will receive a plethora of amazing benefits for increasing their Honor including: Honor Season Mileage which grants you rewards for Honor gained within each Season, including Scrolls and Cerberus Fragments. Each season will last two months. This is similar to Hero Scroll Summoning Mileage, and rewards can be earned multiple times as the mileage loop resets. Every Honor level reached will grant a highly valuable reward such as Ancient God Heroes and Ancient God Scrolls. Daily rewards such as Accessory Scrolls which improve according to the player’s Honor level.   Overall buffs for players which improve according to the user’s Honor level. These buffs include: additional Major Arena tickets, additional Infinite Tower tickets, boosted EXP from Scenario and reduced Investigation times. Players can check their Honor level, experience, and the status of level compensation in the Honor area.   Consuming diamonds can earn honorary points (experience). Achievement rewards can be obtained once according to each honor level, and compensation will be paid to the mailbox. Honor levels can be achieved for up to 5 levels, 5th level caps at 99%.   [Hell’s Gatekeeper Cerberus Arrives]   A new Heavenly Hero has dropped! Cerberus, Hell’s Gatekeeper is a brand new natural 5-star Dark attribute Tank. Has Shu finally met his match? 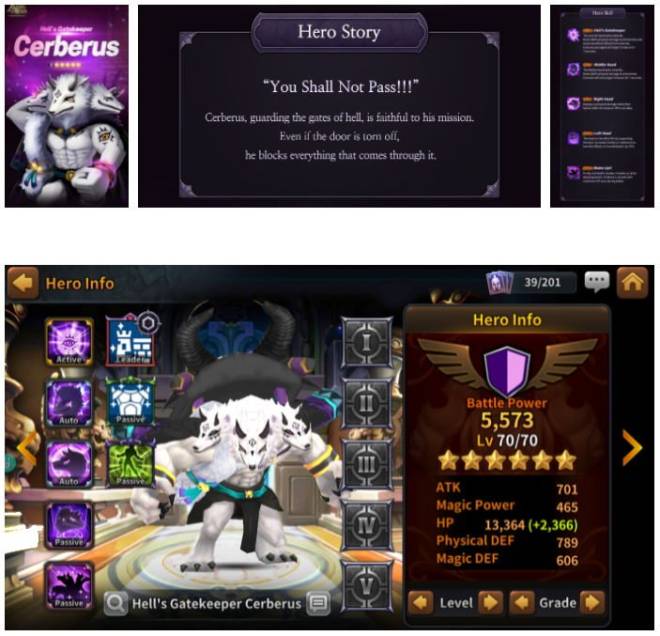 Being a Heavenly Hero, Cerberus’ stats are above regular Ancient Gods’ and are comparable to Shu’s. Cerberus combines monstrous stats with an impeccable defensive Skill kit and Passives, and a great Leader Skill which boosts the front row’s HP by 50% and Evasion by 30%. You can find full details regarding Cerberus via the in-game Book. Cerberus is the ultimate example of the Tank class in Along with the Gods. Cerberus can take an astonishing amount of punishment and dish it back out, all while supporting his team with shields and buffs. That massive shield on his back isn’t just for show!   Players will be able to obtain Cerberus collecting Cerberus Fragments exclusively from Honor Mileage and using them at the Temple of Heroes via the Selective Summon menu. 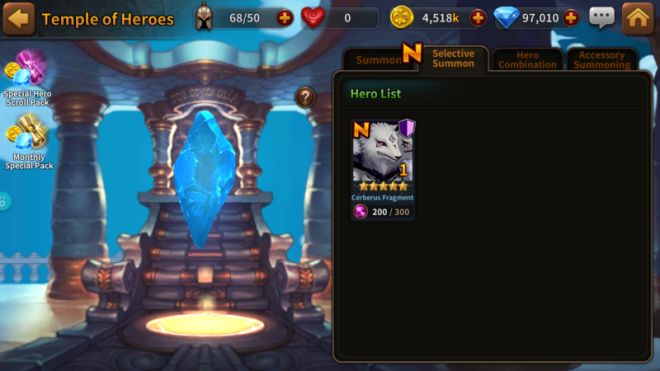 Cerberus will not be available for sealing and minting into an NFT or on the Marketplace, nor be available via scrolls, Cerberus is Honor Exclusive.   Wondering what Cerberus looks like in-game and in battle? Check out this video which displays his animations and Skills!   [UI Upgrades] 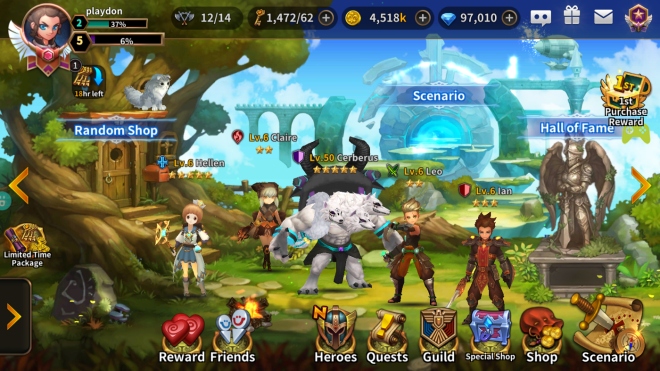 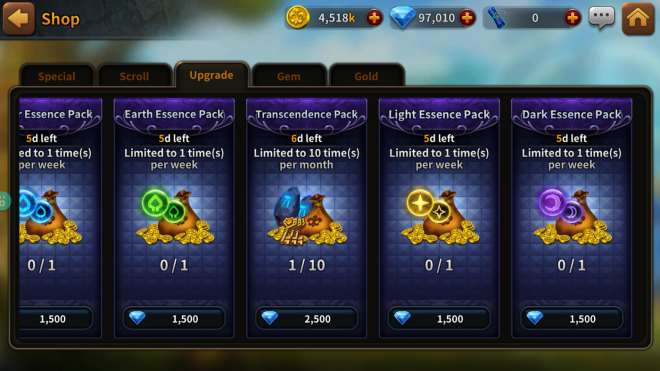 Taking into consideration the increased Transcendence level cap and player feedback, the monthly purchase limit for Transcendence Packs has been increased from 5 to 10 packs.   [What is Along with the Gods? How do you play-to earn?]

https://medium.com/playdappgames/along-with-the-gods-quick-guide-87f9a1f3fb01   Along with the Gods is a play-to-earn mobile RPG and part of PlayDapp’s multi-homing game strategy, in which players can easily move across and use various platforms. It refers to games where players can leverage their playtime and accomplishments from one game to other games, metaverses, and blockchain platforms.   Players can be rewarded in PLA tokens in Along with the Gods through either or both Daily Quests or Weekly PvP rankings. Players can also create and trade Along with the Gods NFTs on PlayDapp’s Marketplace.   ■ The error that the Guild War on P2E server cannot proceed has been fixed.   [Team PlayDapp]   Social Media Twitter: https://twitter.com/playdapp_io Telegram: https://t.me/playdapp_official Medium: https://medium.com/playdappgames Discord: https://discord.gg/Tcq32AN Facebook: https://www.facebook.com/playdapp.io