Along with the Gods future secured!

Some great news for Along with the Gods players. Plus blockchain details! 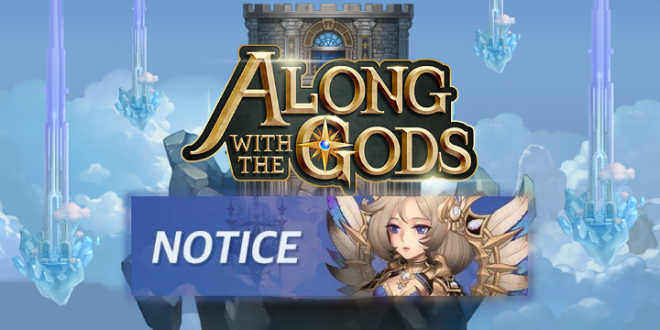 Now the service is not terminating what happens to my account? Accounts that were active before the Termination of Service notice will be restored back to that state.   [ I deleted/closed my account - what about me? ]   If you closed or deleted your account, you'll still be able to come back to a restored account. As it was before the Termination of Service notice. You'll have to get in touch with a member of the team, via help@playdapp.io or reach out in our communities (links at end of the story).   Please note that if you deleted all characters and items in the game, rather than just account deletion. These are no longer in the database, and can't be recovered. What about the plans for refunds?   We've completed the refunds for purchases in the last 30 days. As the service will come back, the partial refunds will not continue.   [ You kept talking about blockchain - what's the status of that / why has it taken so long? ]   We've been working on the blockchain version of Along with the Gods. Our internal focus has been working on creating the best NFT experience for AWTG. There are many aspects that could see NFT application, from runes to characters and in between. Creating a balance of the best experience for players in terms of gameplay and in terms of value for the items they are creating has been a significant milestone. In-game items that generate quickly and in large numbers are not overly attractive as NFT, this is because it can flood the market, creating low value for players, as well as lower reasons to commit to trading.   Coupled with this has been a steady increase in the cost of maintaining an Ethereum based game. Gas, a central part of the Ethereum network has remained unstable at its cost, with dramatic shifts in price. Creating a system that allowed for stable charges to players has proven to be incredibly hard.   While we could place all charges on the user, it's a high burden for you as players. With ethereum 2.0 being slower to materialize than we had hoped releasing an ethereum based game is currently not in the best interest of PlayDapp and most importantly players. With this, we've taken the choice to focus on an alternative mainnet, prioritizing speed, cost-effectiveness and reliability for players. There are some promising mainnets out there, with interesting solutions and we look forward to revealing more in the near future.   [ So when can I play? ]   Our development schedule is aimed at players getting their hands on the blockchain version in the second half of the year. We're super excited to share this.   Even more so, we're able to give plans on an intended Focus Group Test (FGT). We'll be running our FGT, in a test environment, in that later part of the year.   This FGT will be your chance to help shape Along with the Gods into a truly fan-based and player-centric game.   [ What happens to my account on the non-blockchain version? ]   If you've been playing AWTG, and continue to play on it when the blockchain version launches, your progress will continue.   ---------------------------------------------------------------------------------------------------------   [ Too long, just give me the essentials! ]   Along with the Gods Knights of the Dawn, will continue.   You'll see no difference, as the process is automatic with no impact on players.   All accounts will carry over to the new server/service in the state they were in before the closure announcement.   Old accounts and closed accounts can come back.   Blockchain development version aimed for the second half of the year.   Focus group testing will happen toward the end of the year.   The Blockchain version's chain is being investigated. With a focus on one that proves to be cost-efficient, fast and reliable for all players.   We want our players to help shape this game. To be the game you want.   ------------------------------------------------------------------------------------------------------------     [ Social Media ] Facebook: https://www.facebook.com/groups/AlongWithTheGods/ Moot: https://moot.us/lounges/345/ Twitter: https://twitter.com/AWTG_PlayDapp Medium: https://medium.com/dozerfriends Discord: https://discord.gg/5QMpnJ7 Telegram: https://t.me/cryptodozer_io Reddit: https://www.reddit.com/user/playdapp_io