A suggestion to @Studio LB

I was pretty upset when I got to the Blue Kona challenge. This was now a month ago for me but an issue to all new players and possibly the cause of most of the bad "low % for evolution" reviews on google play scaring players away from playing the game. This challenge Is far too hard for new players and a horrible way for introducing new players to evolution chances. At this early time in the game a mission like this will take far more than the 10 feathers provided to accomplish it, making players think that evolving is "too hard and chances are too low". 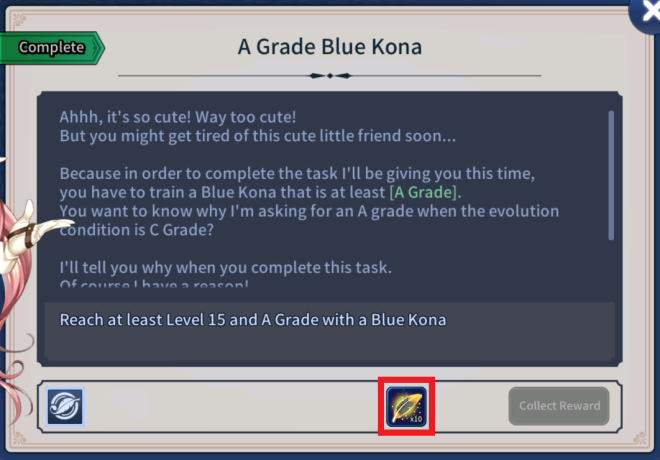 Just 10 feathers but it can take several dozen. It will make any new player turn around and run away without ever finding out that later into the game something like evolving a Blue Kona is an easy task. If your goal is to scare people into quitting before they know if they want to play longer and spend money then mission accomplished.   This review is not the truth of this game but a tutorial like this Blue Kona will make people think that it is true. (Screenshot from google store reviews)

This Blue Kona achievement is a complain I see regularly

Could not have said it better myself "confused because up till that point the quests give you what you need to complete the next portion of it". Tutorial missions should not be halted due to the materials provided for the tutorial quest being insufficient. Difficulty made worst by the fact that Polinas is not good for anything at this early stage of the game or at all so new players have to work hard to evolve into a bird that will not help them.   My suggestion: #1 Pick a different monster that is not as hard to evolve, like Unique>Heroic instead of Common(Blue Kona)>Heroic(Polinas) #2 Script this Blue Kona to always evolve at the 10th feather if it has not already evolved. #3 Remove this portion of the achievements