1. Violation of game operation policy - Use of illegal programs to target security vulnerabilities in the game and make unfair gains. - Cheat acts related to unauthorized acquisition of items and pets - After the current log investigation, the user of abuse has been identified (sanctions are in progress in accordance with the principle of game use) - Improving security vulnerabilities, detecting hack and blocking illegal programs   The use of illegal programs is a selfish act of deceiving good users who normally play games. Therefore, all illegal users will be charged the highest level of penalties (account permanent suspension) in the game operating principles without any loose response or compromise to illegal game use issues. In addition, hack producers/distributors will be informed where further legal action can be taken. In order to ensure that good game users can play games with confidence, log investigation and sanctions on illegal users will be transparent and complete, and the list of illegal users related to illegal programs will be released as follows. 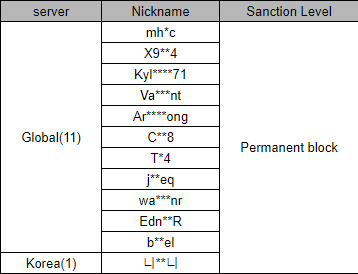 2. Rewards for informants - Introducing well-intentioned users who initially reported the illegal program. - We have reported relevant information and have set some rewards for those who have helped us to resolve the issue.   Global server : 2 users (In order to ensure anonymity, nickname of the game character is not disclosed.)   [Compensation] Crystal x1000 Legendary Light Relics Box (9T) x2 (New items are included and will be sent after the update on August 5th.)   *Compensation rules - First reporter - Provides decisive clues   Thank you.