In Defense of Valorant's Sheriff

Valorant’s weaponry have pretty much fallen into place in terms of their usefulness as of late. Aside from a few touch ups to fire rates and tagging at a distance, most of the weapons have found their place in the meta and most of the weapons aren’t going to be messed with for quite a while. While the latter is true for Valorant’s version of CS’s Desert Eagle, I can’t say the Sheriff has found its home in the hearts of players yet, and I think it’s both a travesty AND a mistake. 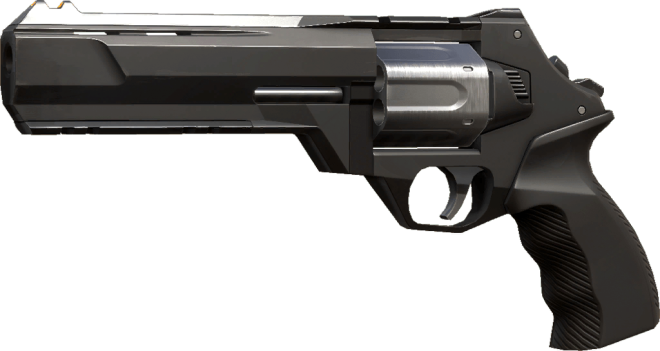 Just like Counterstrike’s respective Assault Rifles, The Phantom and The Vandal are considered the best weapons in the game for most situations given the fact that they are one tap headshot weapons with decent to great rates of fire and accuracy that varies, but can be worked with, especially when it comes with The Phantom. And just like Counterstrike, the Desert Eagle Variant that is the Sheriff is underrated and underutilized in a terrible way. The pistol, which costs 800 creds, has access to a one shot kill potential in trade of spammable accuracy and fire rate.   The question here, really, is how much value are players putting in the respective assets a weapon brings to the table, and why? We can actually gauge this in rough estimates and see how The Sheriff pairs up:   If we take the assets of each weapon, and divide those assets by their cost, we can get a presumed value for each of those assets. The Vandal, for instance, sits at 2900 creds and offers a good fire rate, decent accuracy (within a reasonable amount of shots), and one shot potential with a bonus of not losing that potential at any range. Given these attributes, you would assume that each one adds an average value of about 725 creds.

Obviously this isn’t correct, right? Any player with any amount of experience can tell you that this assumption is baseless and shows a deep misunderstanding of the game itself. But why is that? Why is calculating the value of each weapon’s asset by the weapon’s cost inaccurate? For one thing, you can take a look at varying weapons and see that the ratio’s don’t add up. The Phantom is The Vandal’s main competitor and that trades some firepower at distance for accuracy and rate of fire (not to mention a silencer that hides your bullet tracers). Clearly we can’t just divide all those aspects by 2,900 and call it a day. Secondly, it’s more than obvious what the deciding factor for these weapon’s prices are to begin with anyway.   Take a look at The Operator:

It’s the most expensive weapon Valorant has to offer, and was such a powerful weapon that Riot had to bring the nerf hammer down onto it. It has a terrible rate of fire, no silencer to be seen, the accuracy is limited, obviously, to one pinpoint shot, and as mentioned it’s going to break your bank and potentially fill out the enemies if you falter with it. If we were to put this weapon up against the same standard as the test we just did with the Phantom, it would be priced around 725 Creds, since it only has the one attribute to speak of: Damage. The real reason it isn’t priced this way, though, is simply because you can one tap someone with it at any range, assuming you don’t smack their leg. In summary, this means that the FPS community values one tap potential greater than it values damage. That is to say, dealing 99% of someone’s health with one shot is not 1% less valuable than dealing 100% of their health with one shot, it’s infinitely less valuable, to a point where the most expensive weapon in these games tend to have no other function than doing just that.   This brings us full circle to the Sheriff. Sitting at 800 Creds, you have the power to one tap anyone from any range, assuming you’re accurate enough. You can do this without breaking the bank or taking the risk of giving the enemy team an expensive tool. You can hold angles on a save round, keep yourself liquid after a victory, force the enemy team to respect corners and use all of their abilities to enter sights on *every* round, and do it all with a sidearm.   The Sheriff might be seen as a niche weapon that’s only used for show, but in reality the pistol is a gateway for the talented players of Valorant to have greater control over their team’s finances while also holding the same amount of power as they would with an Operator, with the added ability to spam rounds in sticky situations. The only attribute that lowers the value of the Sheriff is the average player’s ability to aim, so git gud, and get the Sheriff.   GLHF, -E