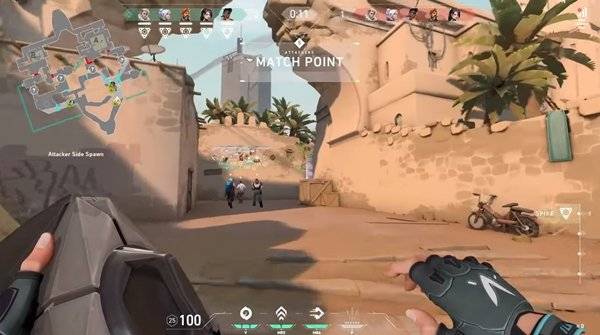 Spike Rush is a new game mode of Valorant.   This is like Howling Abyss of League of Legends.   Spike Rush is BO7 and you cannot buy any skills & weapons & shields.   The skills except the ultimate charges in each round so you can spam your skills freely.   The weapons are chosen randomly in each round (In pistol round, only one of the pistol will be chosen randomly) and 10 players will have the same weapons.   Instead of the ultimate point +1 orb, 5 types of orbs will be spawned in many places of the map.   Each orb's effects are like this   Blue - Immediately full charges ultimate points Yellow - Increases attack & movement speed Orange - Change your weapon to another random weapon. Most of the time, this new weapon is better than the previous one. (For example, pistol to Spectre, Spectre to Vandal, etc) Red - Increases damage. This effect lasts until the end of the round. Green - 3 seconds after you obtain that orb, all your enemies' health will be reduced to 10. They'll recover their HP over time.   As you see the screenshot above, each offense team agent has the spike. If anyone of them plants spike, the other players' spike will disappear immediately.   Spike Rush ends in 10 minutes usually so players who don't have enough time to play normal mode can enjoy this instead.   The only one that I don't like in this mode is sniper weapon. When the sniper weapon was chosen, the offense team get suffered in my experiences.   What's your opinion?