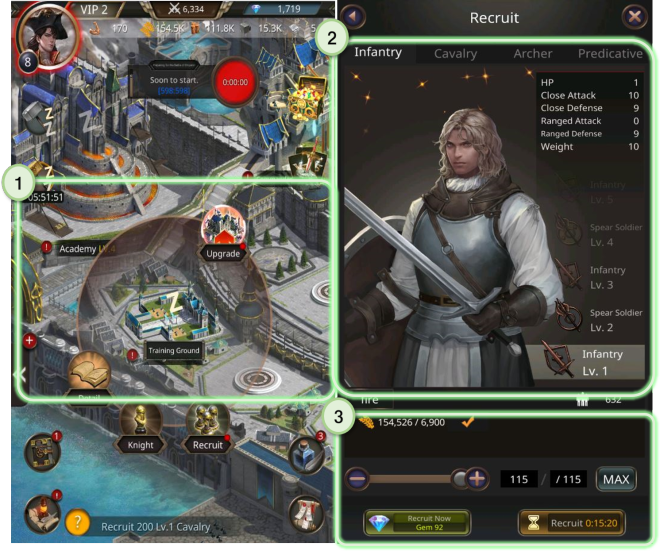 Recruiting soldiers is very important as much as gathering resources. Without corps or armies, any good commanders might be useless.   ① If you click Training Ground, the page to recruit soldiers will come out. ② You can recruit Infantry, Cavalry, Archer and Wizard. ※ All kinds of soldiers have their own affinity to the certain kind of soldiers. ※ Positive affinity brings 50% increase in damage and defense power but negative affinity leads 50% decrease in damage and defense power.   (2020.05.06 Changed) ※ Infantry : They specialize in Mefee Battle. They are stronger than Archer but weaker than Wizard. ※ Cavalry : They specialize in weight. They are stronger than Wizard but weaker than Archer. ※ Archer : They specialize in attacking Cavalry. They are stronger than Cavalry but weaker than Infantry. ※ Wizard : They specialize in attacking Infantry. They are stronger than Infantry but weaker than Cavalry.   ③ You can control the number of recruiting soldiers and the amount of resources required will be shown. ※ After choosing the number of soldiers, you can recruit soldiers normally at free or instantly with gems.   ※ Important Note - You cannot get any used resources back later even if you fire soldiers.   ※Screenshots attached might not be the latest version due to the game update.