Overwatch has released its newest character of Echo, an adaptive AI which is able to mimic other people’s ultimate and copied her creator's voice, an Overwatch scientist by the name of Mina Liao. Dr. Liao created Echo’s AI while Overwatch was still active because she was convinced of the potential artificial intelligence and how it has the power to transform the lives of humanity for the better.

Originally, Echo was created using heavy restrictions which would have severely limited her abilities, these restrictions were put in place because of the omnic crisis that had happened. Going against the restrictions that Overwatch has forced on her Dr. Liao created Echo with no limitation, Echo was created as a general AI that learns by observing. After countless hours, Echo now has copied not only Dr. Liao’s speech but also her behaviors.   When Dr. Liao was killed in an attack at the Overwatch facility, Overwatch was unwilling to continue the project without the Doctor. With Echo’s ability for adaptive learning making a lot of Overwatch operatives uneasy and leading to Echo’s full shut down and then the robot is placed in quarantine. After Overwatch was officially shut down, the United States government took possession of the Echo robot. 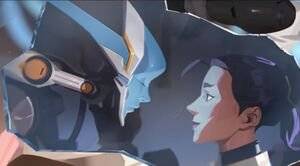 Since Echo was deactivated, many years had passed. The robot was being transported on a train from Hurlburt Field to Davis-Monthan Air Force Base, that train was derailed by the Deadlock gang. The Deadlock gang then intercepted the freight train where McCree reactivated Echo. Echo had not known anytime had passed since her deactivation. 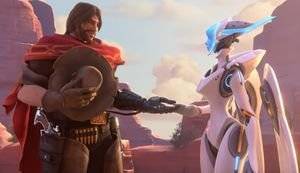 McCree greeted her like an old friend stating that Echo had been ‘gone’ for too long and then McCree ended up leaving saying he had some business he had to take care of. But Winston had already sent out the recall order to which Echo was heading to respond to.   While her backstory isn’t as tragic as Mei’s, I do think that her backstory fits alongside the rest of the Overwatch cast very well, But what do you think?