Is the ever-present angel of Overwatch, Mercy, the actual main villain from Overwatch? That may sound crazy, but the evidence further proves my point. Some points are how Mercy probably revived Reaper incorrectly, possibly on purpose and while her Valkyrie Suit makes her look like an angel. 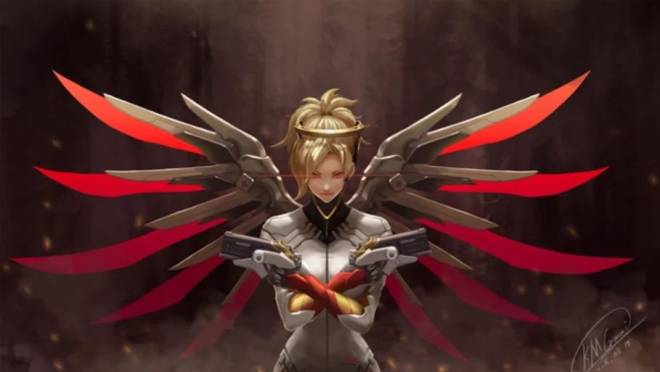 Through various Mercy and Reaper interactions, you can see how Reaper blames Mercy for his current situation. You can also see how Mercy initially acted like she didn’t know what happened to Reaper, but then suddenly knows what happens and had a plan for what she “intended” for him. Some examples of this are: Mercy: What happened to you?! Reaper: You tell me, Doc. This shows that Reaper directly blames Mercy for his current position and how Mercy is playing dumb, hoping she can get away with her experiments. Mercy is a scientist, and most scientist who as successful as Mercy has been primarily run experiments.   Reaper’s official bio gives us more information: “Survivors have described a black shadow ghosting unscathed through the most hellish battlefields. The few bodies recovered of those he kills are pale, empty husks drained of life, their cells showing signs of intense degradation. He may be a byproduct of failed genetic alteration, which forces his cells to decay and regenerate at a hyper-accelerated rate simultaneously.”   With Mercy being able to revive someone, and using a different way to restore Genji after his fight with Hanzo, there had to be an initial experiment that showed Mercy how to revive people with little-to-no issues. Mercy: This is not what I intended for you, Reyes. Reaper: You knew exactly what you were doing. This character interaction further shows that Reaper knows that Mercy knew what she was doing to him when she revived him and tried out this new and untested technology. While Mercy now suddenly knows what happened Reaper when compared to the first character interaction shown in this post. Mercy now not only knows what happened to Reaper but had a plan for what was supposed to happen to Reaper.   Mercy’s Valkyrie suit makes her look like an angel, but like the old saying, “Don’t Judge a book by its cover,” as a Valkyrie are ancient Norse goddess who ferried the souls of dead warriors to the realm of Valhalla as a reward.

This suit may make Mercy look like an angel, but the overall look of the outfit is fake. This suit has Wings of Lights, a halo, and a predominately white color scheme, but since none of these items are organic instead, these features are created and are heavily mechanized. The wings are fake and bulky, and the halo also looks bulky and fake. The suit itself also seems to be made out of metal as well as being man-made means that being an angel is an image that Mercy wanted to project.

Mercy has a ‘no pulse’ emote, this emote has Mercy taking her pulse, but then she laughs it off as if Mercy has no pulse. This might be a joke or silly emote, but what if, and this is a big what it, she doesn’t have a pulse? Would it be that big a leap, she did a similar thing to Reaper, what if he was the first try at immortality? Think about it, and Reaper is stuck in between life and death, he is forced to kill and leave husks in his wake to continue existing. With Reaper being the first experiment of bringing back someone, but making them immortal in the process she could’ve learned how to have this process work without the side effect of needing to drain people of their life to survive.   What could’ve been a potential second experiment is how Mercy ended up, bringing Genji back from the brink of death and even potentially increasing his Shimada powers, as seen in the Hanzo Vs Genji trailer where parts of Genji suit (which was presumably designed by Mercy, who is the person who saved him) had the same color as Genji’s dragon. This could’ve also been an experiment on Mercy could’ve been trying to find a way to increase her own power in a similar way.   When looking at all the evidence one piece being Reaper and Mercy’s interactions, the second piece of evidence being how Mercy’s suit projects the look of an angel which could be her way of influencing peoples opinion of her she would do this to make her seem less suspicious and stop people from being wary of her. The third pieces of evidence are Mercy’s ‘no pulse’ emote where she pretends to take her pulse only to laugh it off as if she doesn’t have a pulse and that fact is seemingly aware to the player. The idea that Mercy in fact evil becomes much more plausible when considering all the overwhelming amount of evidence against her. People may call her Mercy, but for her victims she has none.