Paving your way to SSS - 7 things to note and tips to grab!

Heya! Its me! Your friendly neighbor, and ATK reporter, Plague doctor here! Giving another set of tips (learned by a fellow newbie) for our current and future would-be players!   You might be thinking, why are we going to listen to your advice? What level are you anyway? How long have you been playing this game?   Well, I've been playing this game for about a month now. I'm at a server which has been merged with others three times, but I still managed to stay on top 5, amidst all spenders!   Well don't get me wrong, I don't hate players who spends ingots to be powerful in the game, in fact, I am grateful to them. After all, they're one of the reasons why the game is still flourishing! And also, I'm quite one of them. I know I'd proud myself as a F2P player before, but in this game you can't be like it for long! There are so many tempting items that can boost your battle power for just a few ingots! I may still be free to play, but you can say that I am now also a bit of a spender!   Anyway, that's enough about my in-game character. Today we're here to talk about yours!   Are you having any doubts about your current battle power? Do you think there are still room for boosting it at your current level? Why is your "become stronger" section still has A in it? Worry no more! Check out the list below and it would definitely help you out : 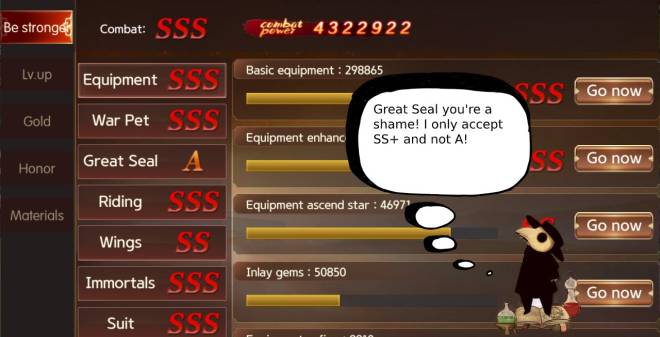 1. EARLY DISCOUNTED ITEMS ON EARLY GAME IS ESSENTIAL!   Three-star legendary gears are not important during the early game. If you're a new player, or on a new server, leveling up from 100 to 390 would only take a week or two. Spending on legendary gears too early would lead your next tier items for higher levels to be delayed. BUT, spending on discounted fashion, wings, or mount is never a regretful decision! The battle power is permanent and it would give you an advantage. Plus the character aesthetic of course!

2. SAVE YOUR INGOTS UNTIL THE RELEASE OF CONSUMPTION RANKING EVENTS!   I know the feeling of excitement to buy certain items needed for your character. Buying ticket boxes, rolling some of it on treasure hunt. But you know what would get you in a win-win situation? Spending ingots while Consumption ranking event is active! It would not just give you a simple bonus upon purchasing certain items that you want, it would reward you with a staggering amount of essential items, especially if you get the top one! Like what its shown below :

3. CRIT DAY IS NOT CRIT DAMAGE BOOST, ITS AN ENHANCEMENT BOOST!   I've brought this up because there seem to be a misunderstanding regarding the functionality of this section. Some misinterpreted it as a damage boost if you chose a certain advancement (For example, immortals, wings, mount, etc...) But that's incorrect. There's a question mark button on the upper right of this section for you to see its purpose, but the guide seem to have not been translated. So I'll go ahead and clear all the confusion here.

Crit day would help you boost the effectivity of enhancement stones and dans! You can observe it by choosing one of the advancements that you ready to level up. Let's say you decided to level up your wings ; Choose your wing as your Crit day, and then start with leveling it up.   You will see that the advancement would give you twice the effectivity of each advancement stones/dans.   I would also recommend you to utilize this function. Don't level up your advancement until a crit day is free for that certain gear!

4. BEING ALONE IN A SERVER (BEFORE MERGE) IS THE BEST THING!   So all of the players on the server you're currently on has disappeared. Most probably they've jumped on to another new server to grab the chance to once again, compete with the Monarch position. You're satisfied with your character, your battle power, but seem a bit lonely because you were left alone? and now you feel like jumping in to a new server as well.   a piece of advice : DON'T!   Being almost alone on a server is the best thing ever! You can do your daily tasks freely without worrying about other players stealing your boss kill. You would probably win all daily events since the players in your server are dwindling. You're probably going to make it on top 5 or 10 and get the daily rewards of it. You can get all the prizes all by yourself while waiting for a server merge!   Getting all the resource you wanted before getting mixed up with new sets of players on different server is a total pro strategy!   5. SACRIFICE SCHEDULED DAILY EVENTS SO YOU CAN FINISH ALL DAILY TASKS AT NIGHT!   While it is indeed up for argument, based on personal preference, having an uninterrupted daily tasks is better than daily scheduled events. It does give rewards but it mostly favor honor points than everything else. Now unless you're focusing on your Official rank, I would suggest you start doing daily tasks every midnight, or anytime the players on your server are offline. Especially when its a new server. This way you would finish the tasks fast enough (especially bosses, the ones that are being contested the most) and proceed with AFKing on Trial lands. Remember that each and every tasks from daily is important. Period.   6. TREASURE HUNT IS ALL YOU NEED!   So you're looking at Treasure probe section. You see 4 tabs. Treasure hunt, Rune, Treasure probe, Fairy seal. You don't know where to invest and put your amethyst into. You don't have to think this through, just go to Treasure hunt and roll all of your tickets!   Rune hunt, would cause you 999 Amethyst and would only grant you 10 rolls. And the odds of getting red rune is fairly low. And get this, even if you get the red one, it would probably only give you 15-20k of Battle power.   Based on recent estimation, Runes only contributes to 1/8 of your total battle power. Its not a desirable goal to dump all your amethyst into.   Its the same as the Treasure probe for Official rank gear. It contributes less than the items that you would get on Treasure hunt. And the odds of getting one is really low.   If you invest on Treasure hunt, not only you would have to chance to get a 3 star legendary gear of your level, you would also have a chance to get a 40k bp mount, or a 30k bp wings! These are all essential to rise your battle power!   7. PARTICIPATE IN EVERY MOOT/FACEBOOK EVENTS   If you're reading this article, then you're probably somehow of an active member on Moot! And that's a very good thing! The administrators of the game always have a surprise event. And each rewards are worth the effort of joining and can help boost your battle power! Ask every other question you have in our group chat and someone would definitely hear you out! Do not be shy, ATK community is aiming to be a friendly space for all players globally!   I hope that this list has helped you somehow as you venture the lands of ATK!