So for the first week of ATK Reporter Season 1 - Episode 1!

I've interviewed two ATK Challenger players that has been playing the game for almost 2 weeks. (It's sooo difficult to communicate with the high ranking old players, maybe they've already left the real world and migrated inside the game. Kidding!)   So moving forward, here are the questions they have been asked during the short period interview conducted today. (This is because of those old foggies ignoring my chats.)   1. How is your experience playing ATK Challenger so far? 2. Based on your personal experience on playing the game, have you encountered any major bugs and glitches that you think need an immediate action? 3. Do you have any suggestions, ideas, or feedback you'd like to share or voice out to our GMs and developers? 4. (Extra question) - Don't you find it weird that the in-game fonts are like compacted too much? Every letters are overlapping and there are times the announcements like codes in programming.   I really appreciate that these two took out some time out of their busy schedules and graced me with their moment. Here are their answers from the above questions:   Let's start with Server Domiiii of 228 G21   1. I am having fun playing the game for almost 12 hrs a day, I've met alot of good players as well. The GMs are friendly and you can talk to them about your concerns about the game. The Game overall is generous in terms of giving away free stuffs that can help you to grow more ingame, I personally recommend this game to those people who are looking for a game that is worth putting their effort into. Alot of good players and most importantly active GMs, so far so good I can't really say anything but it is a really good game. (One round of applause!)   2. To be honest I haven't encountered any glitch or bug in the game but there was a time that the game optimized the settings itself to reduce the lag without even notifying me I don't know if that is a bug or a glitch. (At the very least, she's honest.)   3. I suggest they add an another way to get the Tiangong equipments and the Official Rank Equipment as for now you can only get them from Treasure Probe, also I suggest they put a Cross-Server Lounge where you can interact with other people from other server, so far so good thats all. =) (I would also love to have this implemented. LOL!)   4. I find it really weird judging from how long the game is running I'm surprised they didn't fixed it yet but I suppose I played alot of similar games before that is why I am used to the overlapping texts + codes/text/scripts error. I hope that the Devs are trying their best to make the game better for everyone else.   What a nice lady we got there!   Then let's move on to our next interviewee, the Onii-san of their server (I guess) ThorpeCory of S231 G24!   1. It was good experience maybe I would give 95% because of bug, lag. but the gameplay its okay . xD (XD XD XD)   2. Yes indeed. we don't know if some players if they know how to do bugs or glitch trick or cheat. example the game of Land of doran I played before other players they using bug or glitch trick. (I think we're not on the same page here but I'm getting his point of some players exploiting glitches or bugs if there are any.)   3. 3D view zoom in and out to look for ours characters. I hope there's a choices about graphics low medium high and numbers of players surrounding xD 😍(He really loves his in-game character <3)   4. Sometimes. 🤣 I think my bad connection that's why I see those.   I had fun interviewing them, and their answers are quite out of my expectation. This interview was conducted to discuss the opportunities the game has to improve. We'll await for GM ATK's response to these 'feedback', and how they'll provide the players the best we could experience more than what we have now.   **Anyway, everyone is welcome to comment if they have game related concerns that they think should be addressed. Don't keep it to yourselves as we would want to provide everyone the experience suited for everyone.** 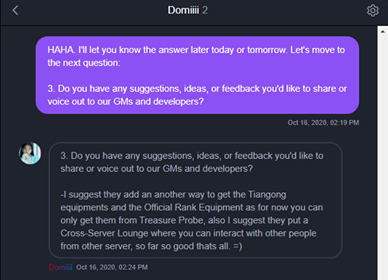 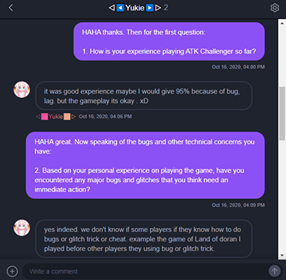