Dead Cells is an action platformer "rougevania" where you play as an undead prisoner who ventures through increasingly difficult levels while fighting enemies, collecting items, and uncovering secrets along the way. Dead Cells has earned widespread critical acclaim and combines two of my favorite genres in metroidvanias and roguelikes so I’ve been eager to finally give this game a shot. Does Dead Cells live up to the hype?

It’s difficult to fit Dead Cells into any one genre but it’s clear to see why the developers describe the game as a “roguevania.” The minute-to-minute gameplay is essentially like this: you do some light platforming while killing (or avoiding) the hordes of enemies in your path. There are secret areas, hidden missions, helpful items, and you learn new permanent abilities. Sounds like a metroidvania right? At the same time however, there are multiple roguelike elements including procedurally generated levels, a wide array of tools and weapons to discover, and most importantly: permanent death. 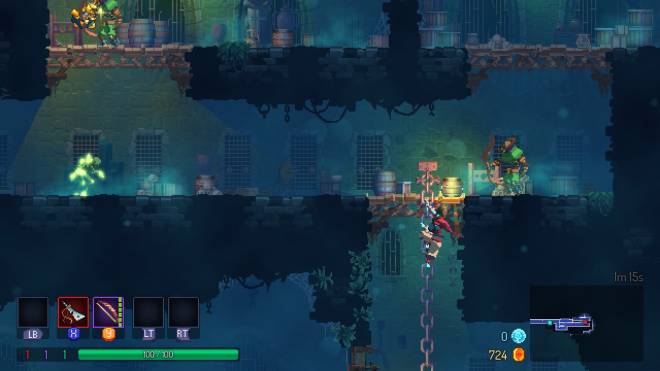 Although there are some minor story elements to Dead Cells, this game is much more about the gameplay than the story. Your character is mute, but it is quickly revealed that you have attempted this journey and failed time and time again. While your ultimate goal is still to survive to the end and escape the prison, you are now working with “The Collector” to discover blueprints and artifacts in order to make use of your deaths. In exchange, The Collector will give you access to abilities and items that can be used on future runs. 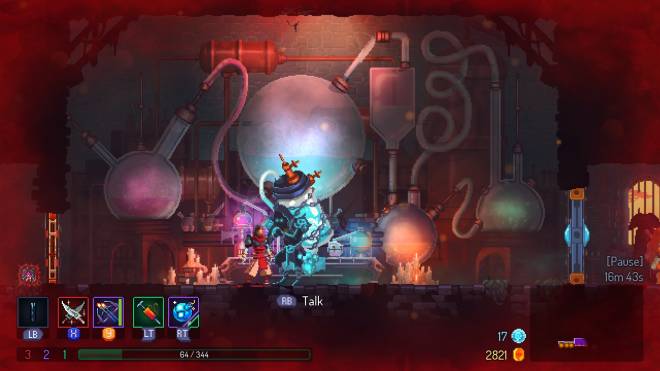 The gameplay in Dead Cells is pretty unique. It’s much heavier on combat than it is on platforming, but the game highly encourages exploration because of all the useful things you can discover. For example, in Dead Cells you don’t earn experience to level up your stats. Instead, you have to find scrolls which you can use to both improve your damage in one combat style and boost your total health. You also heal completely at the end of each level, which means that you don’t have to worry about losing some health exploring as long as you don’t actually die. 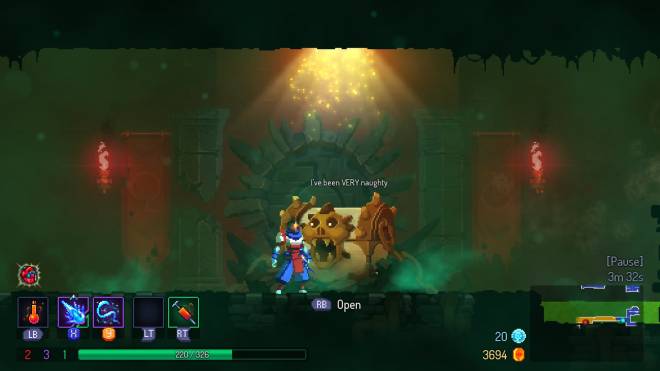 While I enjoyed the way that Dead Cells combined its various genres overall, there were some instances in which certain aspects felt at odds with each other. For example, I mentioned that the game heavily encourages exploration, but it eventually got tiresome because I frequently reached dead ends that I couldn’t pass without unlocking a relic or completing some unknown special event. I encountered plenty of notable secret-type things on every run, but it was never clear whether or not I was supposed to be able to complete it or not. Furthermore, Dead Cells implements a speedrunning aspect which makes it so that you’re encouraged to finish the first levels as quickly as possible. Ultimately I found myself ignoring all the enemies and just blitzing through the levels in order to gain access to the extra rewards and reach the bosses faster. 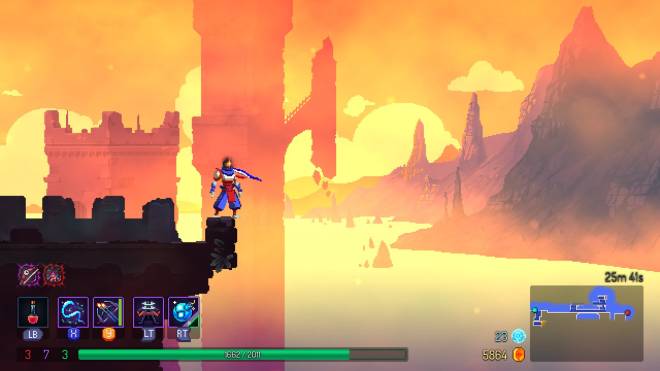 Dead Cells might be a weird mix in some ways but it is definitely a fun game. It does have some awkward aspects and the different game mechanics do get in the way of each other at times, but for the most part I found the speedrunning roguelike-metroidvania genre clash to be very satisfying. While a lot of the combat is optional and there aren’t that many different weapons in the game, I really enjoyed the combat system overall and was surprised at the variety of different playstyles I could successfully pull off. Dead Cells will definitely appeal to fans of both roguelikes and metroidvanias, and although it’s not a perfect game, it certainly lives up to the hype.   Ryan’s Rating: 4.5/5   Dead Cells retails for $25 and is available on PC, PS4, Xbox One, Nintendo Switch, iOS, and Android.