Crash Bandicoot N Sane Trilogy is a 3D platforming game consisting of remastered versions of the first 3 games in the Crash Bandicoot series. While I’ve long been aware of Crash Bandicoot, I haven’t actually played any of the games before (I had an N64 back in the day instead of PS1). With the recent launch of Crash Bandicoot 4, I figured it was finally time to see what the classic platformer is all about. Because this was my first introduction to Crash Bandicoot, I decided to start off the adventure with the first game in the series. Thus, this review will mostly be about the remake of the original, although I did briefly try out both 2 and 3. As with most remakes, fandom and nostalgia often play a big part in people’s perception of modern-day iterations of old-school classics. However, because I have never played Crash Bandicoot before this, I have no nostalgia factor and therefore will be rating the game solely on its merit alone. With that out of the way, let’s get into it. In Crash Bandicoot your goal is simple: make to the end of the level. There are additional challenges available, such as collectibles, bonus rounds, and boxes to destroy, but all of these are optional; as long as you make it to the end of the level, you are able to move onto the next. At the end of each level, a short cinematic plays which shows how many of the bonuses you got. If you were able to destroy all of the boxes then you’ll earn a gem; if not, then all of the boxes that you didn’t destroy will harmlessly and humorously plop on your head. At the start of the game I went through the effort of fully completing the levels, but the task quickly became more tedious than fun, and to be quite honest, I kind of enjoyed watching Crash Bandicoot get bonked on the head. So, I switched my strategy to avoiding all the boxes I could. 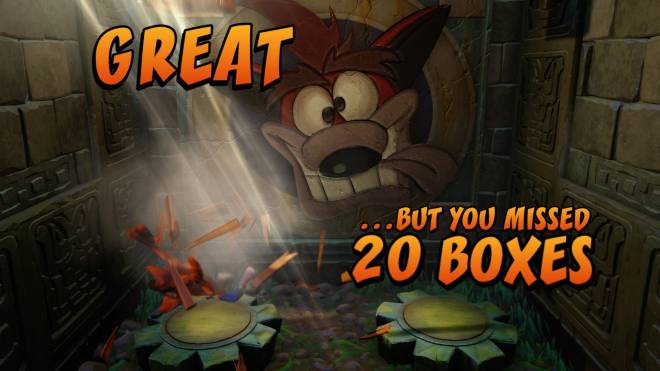 In terms of gameplay, Crash Bandicoot provides 2 different styles of platforming. There are quick, tunnel-like levels where you run down a set path and avoid obstacles, often with unique mechanics such as being chased by an Indiana Jones-esque boulder. These levels were definitely the more fun of the 2 but they only take about a minute to complete. The other style of level was more of a conventional style of platforming (like Super Mario Bros.), but it was really awkward in 3D and would have been much better suited to a 2D format. I’m just going to be honest with you here: this game is pretty bad. Most of the game is just so easy and so boring that it just feels like a waste of time. The most fun levels are the shortest and the most unfun levels are the longest. There isn’t really anything difficult here for a competent platform player, but the controls are awkward and imprecise, and most of the hazards force you to wait for them to trigger before clearing the path so you can’t just speed through the boring parts. There is the occasional boss level but even those are simple and boring. I will admit, however, that riding the boar was pretty fun. 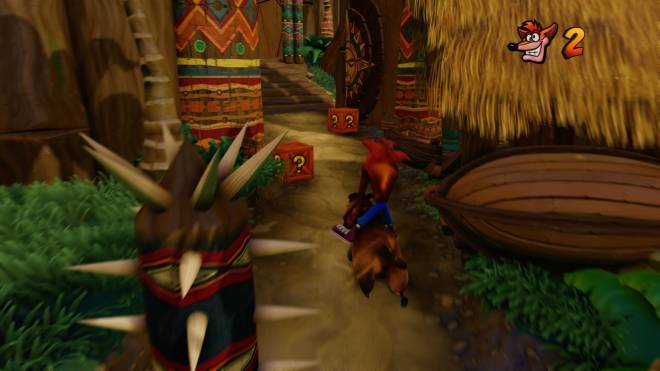 I don’t know how the game felt when it launched on the PS1 back in 1997, but the remake's controls feel just as bad as the N64 games of that era. The graphical improvements are there, but the FPS caps out at 51 (60 with V-sync), causing a lot of screen tearing on a modern monitor with a high refresh rate. If you played and loved Crash Bandicoot as a kid, then maybe there’s something here for you when you consider the nostalgia factor. If we’re just judging this game in terms of its merit as a platformer in the current day though, it’s frankly awful. I did briefly try out the second and third games in the series, but the first few levels didn’t do anything to drastically improve my impression. Maybe Crash 4 will be better.   Ryan’s Rating: 1.5/5   Crash Bandicoot N Sane Trilogy retails for $40 and is available on PC, PS4, Xbox One, and Nintendo Switch.