Last time, I’ve introduced 4 new characters of Fire Emblem : Three Houses 4th DLC.   Today, I’m gonna review (shortly) about 4 new classes.   Those 4 DLC classes require Abyssian Exam Pass. 4 new characters (Yuri, Constance, Balthus, Hapi) are holding this item when you recruit them.   To get more Abyssian Exam Pass, you need to visit the Abyss. When you arrive in the Abyss, visit the Pagan Statue. This can be found on the left side of the Abyss, down the stairs.   You can trade renown points at the statue for Items, one of which is an Abyssian Exam Pass. At 750 renown points, this is certainly not cheap, so you might need to decide between getting this and upgrading the statues in the cathedral, so think carefully about what you want to do.     1) Trickster 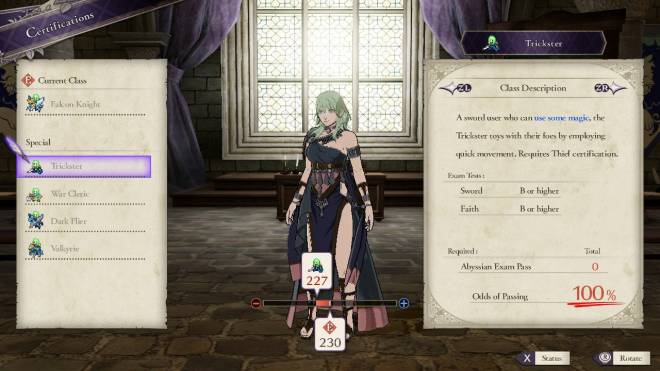 Growth Rates: HP 20% / Dexterity 15% / Speed 20% / Luck 10% / Resistance 5% Class Abilities: Locktouch / Stealth / Lucky Seven Exam Tests: Sword B+ or higher / Faith B or higher Requirement: Thief certification   Yuri’s default class. Thief certification is required to become Trickster.   Trickster has a unique skill, Foul Play. Unit swaps position with an ally in range. This is a very tricky skill. Trickster goes deep inside enemy base, swaps position with a strong ally (Byleth, Dimitri, Edelgard, etc) or has a high avoid rate ally (Ingrid, Petra, etc) so that they will kill all enemies around.   If trickster has Fetters of Dromi, it can move once again after use Foul Play.   Lucky Seven is a new ability. Each turn, grants +5 to one of the following stats: Strength, Magic, Speed, Defense, Resistance, Hit, or Avo.     2) War Monk / War Cleric 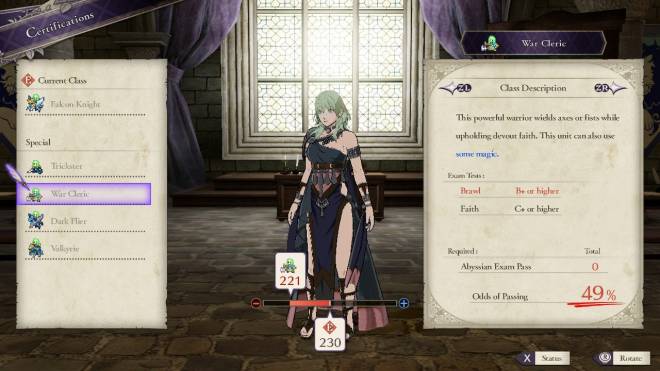 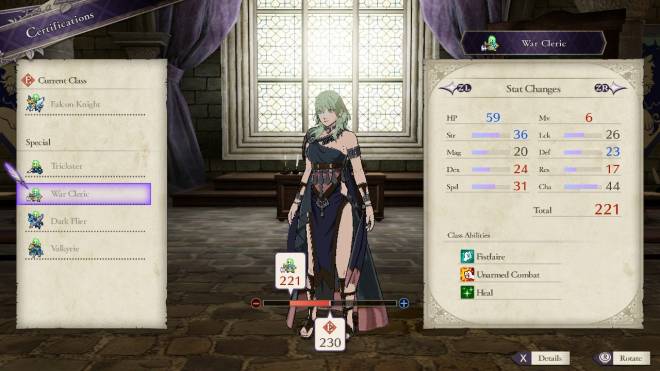 Growth Rates: HP 40% / Strength 10% / Magic 5% / Dexterity 10% / Resistance 5% / Charm 5% Class Abilities: Fistfaire / Unarmed Combat / Heal Exam Tests: Brawl B+ or higher / Faith C+ or higher   Balthus’ default class. It grants very high HP growth rate, the only one class that grants strength bonus as well. It has the highest growth rates amount.   War Monk / War Cleric has a unique skill, Pneuma Gale. It is Magic attack and can attack from long range. But it doesn’t fit so well to Balthus or typical brawl characters thus this is a magic attack and they have so low magic stats.     3) Dark Flier 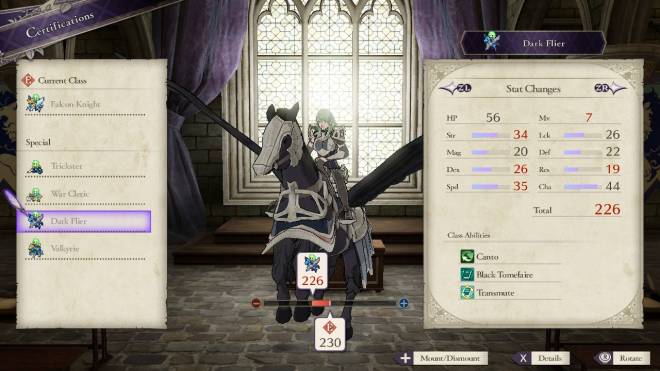 Growth Rates: HP 20% / Speed 10% / Resistance 10% / Charm 10% Class Abilities: Canto / Black Tomefaire / Transmute Exam Tests: Reason B+ or higher / Flying C or higher   Flying class. It has strong damage due to Black Tomefaire, and boost its stats with Transmute.   Transmute is a new ability. If unit is hit with a magic attack during enemy phase, grants +3 to all stats until next player phase ends.   With this skill, Dark Flier can be counter unit to enemy magic units.     4) Valkyrie 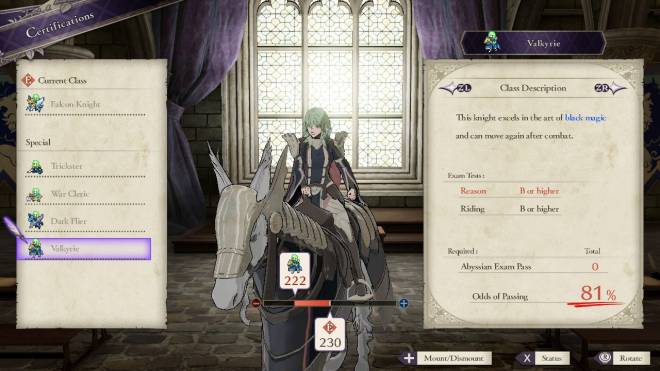 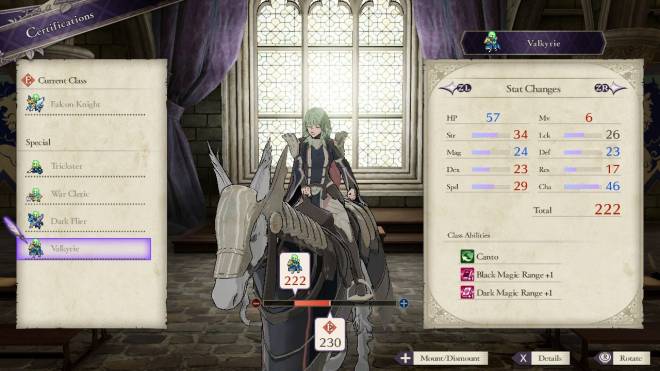 Growth Rates: HP 5% / Magic 5% / Speed -5% / Luck 5% / Defense 5% / Resistance 10% / Charm 5% Class Abilities: Canto / Black Magic Range +1 / Dark Magic Range +1 Exam Tests: Reason B or higher / Riding B or higher   Riding class. It has a long magic range due to its class abilities. Valkyrie has so low growth rate bonus so do not select this class too early or you will have a lack of stats.   Due to its range boost ability, characters who have a short magic range (Annette or etc) will fit this class very well.