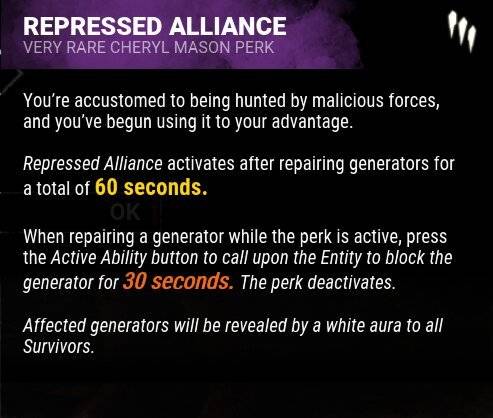 After repairing generators for a total of 60 seconds, you get the option to block a generator from being kicked or regressed or worked on for 30 seconds. Why would you want to do that, you ask? The obvious strat the devs had in mind was making a perk that gave the survivors the power to prevent Pop Goes the Weasel or Hex: Ruin from getting too much value. It's a shame they did it in such a way that more or less sucks.   To put this into perspective: a killer who pops a 99% completed generator with Pop Goes the Weasel will get roughly 20 seconds regressed onto the generator. He then can’t chase the survivor who off’d the generator as they’ve made too much distance and it would usually be a waste of time, meaning the survivor can come back and resume repairing with 25 seconds of their time wasted after the killer wanders off.   Now assume that the same survivor is running Repressed Alliance. He triggers it when he sees the killer coming. Now not only is that same generator guaranteed to take 30 seconds at minimum to be completed, but the killer can chase the survivor without losing any time while also having full confidence that the generator won’t be completed for 30 seconds. How is that a good perk at all?   The developers added a neat little bonus to this perk that allows for other teammates to see the generator when it's blocked, meaning they know there's a good chance they can go and finish it during the chase while the killer is busy. But even then, you’re gambling on the stars aligning for a high roll; A nearly complete generator, a killer that won’t go back to the generator just as it loses its immunity, a killer who won’t down you before 30 seconds are up, and a teammate who’s willing to abandon his generator to come finish yours.   #D-Tier   #BloodPact ~~~~~~~~ 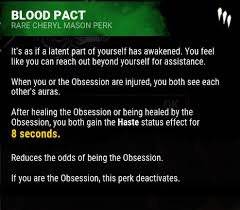 If you or the obsession are injured, you can see each other. Should you end a healing action on them, or they you, both of you gain the haste status effect, 7% increased movement speed, for 8 seconds.   The aura reading aspect is like Empathy, but only applies to two survivors on the condition that one of them gets injured, and you already know where you are so your aura doesn’t actually help you and in this way the perk is bad. The haste increase requires you to heal your teammate which you can’t do if they are being chased, and if they aren’t being chased and you have time to heal the haste is useless, in this the perk is bad. Getting use out of this perk requires you to play altruistically around one teammate whether or not it is efficient to do so, in this way the perk is bad. In the rare occasions you happen to become the obsession using this perk, it deactivates altogether, in this way the perk is bad.   This perk is bad.   #F-tier #ImSorryBrian   #SoulGuard ~~~~~~~~~ 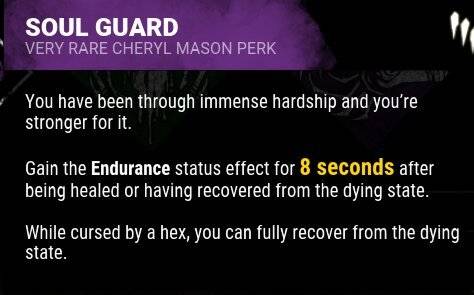 If you get healed from one state to another, you gain the endurance status effect. Yes, the same one you get from being unhooked by a Borrowed Time user.   If a Hex is active, you can pick yourself up from the dying state, this also triggers the endurance effect.   On its own, this perk is #B-Tier But if Hex perks are meta this chapter?   #S-Tier… Seriously, as long as a hex is active this is the best perk in the game. Like Unbreakable but better. Keep in mind, Unbreakable is one of the best perks in the game, but is very linear and serves only to threaten greedy killers and keep them honest. This perk, assuming a hex is active, will not only punish greedy killers, but can be used to make daring escapes and game changing heals from normally doomed scenarios. S-Tier, if Hex’s are common.   Onto Ol’ Pyramid Head’s perkies.   #ForcedPenance ~~~~~~~~~~~~

If a survivor takes a protection hit (I.E. they protect a teammate by tanking a hit for them) they are broken for the next 30 seconds.   Interesting, fun, sometimes useful, but not really ever powerful. Since when do good players care about healing? And who heals within 30 seconds of a killer hitting them, anyway?   #D-Tier   #TrailofTorment ~~~~~~~~~~~ 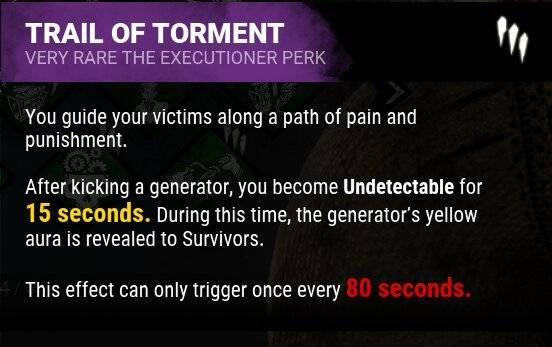 After kicking a generator, you have no heartbeat for 15 seconds. Sounds pretty decent, right? Well, it can only be used once every 80 seconds and survivors see the aura of the generator you kick so they know exactly when and where you’ll be using the perk anyway.   If you couple it with some aura blinding perks to prevent your opponents from seeing the gen’s aura, it can have its uses, but a perk that needs help to be decent is a perk that is trash without the help itself. #D-Tier   #Deathbound ~~~~~~~~~~ 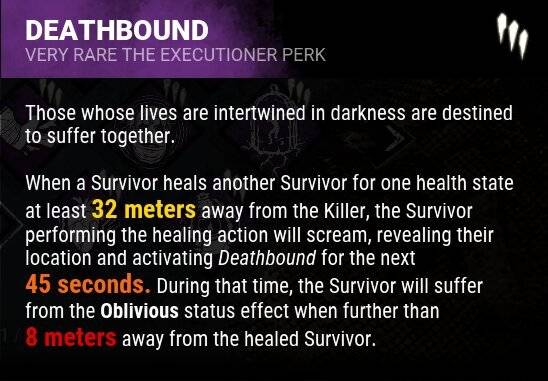