In most competitive video games, game balance is a product of simple analysis that almost always asks the same questions across all competitions. Firstly, "what is the win condition?" A pretty easy concept. In soccer, the win condition is having more goals than the other team. In League of Legends, destroying the enemy nexus. A simple enough question to answer with most games, and usually not the issue with any game worth its salt.   The second question then asks, “What is the aspect of the game in question?”. Simply put, what needs / doesn’t need balancing? What is the balance team looking at the possibly alter as a means to make game play fairer? This most commonly is asked of specific in-game items or characters that are causing players to experience an unfair game design, but can be asked of maps, loading times, character aesthetics, and any other obscure aspect of a game that one could think of. An old example to look at is the old League of Legends loading design that started a match when all the players loaded in, but, somewhat confusingly, loading into the start of the match itself took some players with slower computers up to ten extra seconds, causing an inherent disadvantage that was eventually changed. I.E., Riot Games balanced the game’s loading times.   The third, and often most important question, asks “In what way is this aspect of the game making the play experience unhealthier in relation to accomplishing the goal of the game?”. Under-performing / over-performing items or characters, unhealthy map design, etc. These three questions work to great effect time and again when it comes to balancing a competitive video game around fair game play, and is a quality found in every balance team that does its job correctly. And when it comes to the asymmetrical horror game "Dead by Daylight", the questions are not only obscured, intentionally or otherwise, by the developers, but counterproductive altogether.

So how could this be? Why would balancing this game be any harder than balancing a game like League or Rainbow Six: Siege? The answer lies in the first balance question that is to be asked of any game. "What is the win condition?". Right off the bat, we have found a fundamental issue with the game and we haven't even gotten into the meat of unhealthy game design and unbalanced perk / itemization. Win conditions.   In Dead by Daylight, or DBD, as I'll refer to it from now on, your win condition, to an untrained player, seems almost too easy to understand. If you're the killer, kill. If you're the survivor, survive, right? Well, no. Since the ranking system update in early 2019, killers and survivors actually rank up in much more complicated ways than simply killing and surviving in the best way possible. Instead of just repairing generators and ending the game ASAP, killers and survivors are now required to perform well in four separate categories to qualify for a rank-up or a 'pip'. 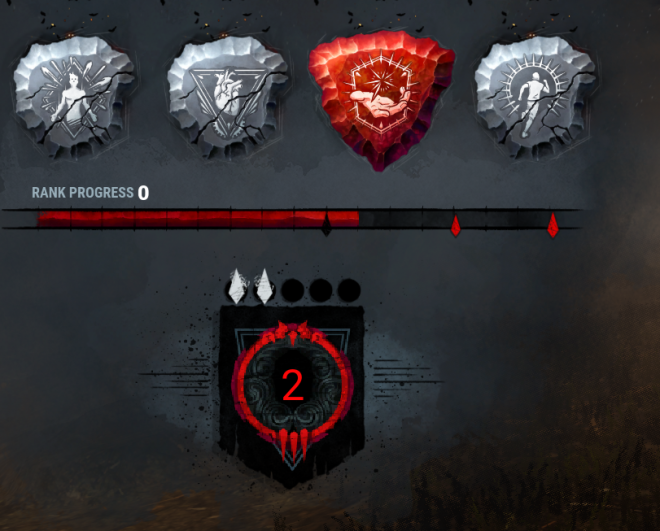 This means, basically, that killers don't just have to kill four survivors to rank up, they have to kill 2-4 survivors while also getting into plenty of chases, while also preventing survivors from repairing gens by patrolling various locations of the map. For survivors, this means that getting INTO (and out of) chases, healing teammates (even when its better to simply repair generators and open the exit gates), and escaping are their means to get a better performance rating and thus get a rank up.   This ranking system sounds nice in theory, but is the fundamental issue with balancing DBD altogether, and it brings us back to question #1: What is the win condition? Not killing survivors, but killing survivors very slowly, and in a way that makes the game fun for them, while also hoping they aren't efficient on generator repairs, lest they end the game too quick. And for survivors? Not escaping, rather, escaping after a long chase or two, and maybe sneaking a quick heal in for a teammate so that you buffer your altruistic rating in between generator repairs just "because".   It really did sound like a good system at the time of its conception. All players of all play styles getting rewarded for all their talents. Except that a system can't just be theoretical, it has to be implemented practically. And its clear, now, after implementation AND tweaks that the system is very very flawed. Let's look at the 3 biggest issues with the system and how they relate to the last two questions of game balance.   Firstly, and most importantly, the current system means that EVERYONE in the match can rank up. If the killer makes the game last long enough, and takes enough chases, and kills enough survivors at the end of the match, but all of those survivors did just enough DURING the match to earn themselves a pip, all players in the match will rank up. This flaw fundamentally destroys any semblance of competition in DBD. A sport simply cannot be taken seriously when all parties in the match can win.   DBD is no different. It pits two parties against each other and gives both of them an option to win in unison. This flaw stems from the fact that the game does not take into account the outcome of the match, but rather how both parties got there. Did the survivors play with a mix of altruism and objective oriented play styles while performing well in chases? Did the killer prolong the game and hook enough survivors to be considered a non-camper?   Everyone earns a pip and just like that, the balance of competition is broken. There is no push and pull, only push, everyone slowly ranks up, and there is no meaning to being rank 1 since there is no threat to ever being de-ranked over the long term. This is especially prevalent in survivor's cases, since you can be a player with little to no technical skill in chases or saves and still get by with completing objectives and healing teammates and a decent rate, but holds true for killers as well. This is especially true for both parties since you can qualify for a 'black pip' or a rating that holds your rank in place, but doesn't move it up or down, quite easily.   The second issue is that this pip system, that plays around how a killer and survivor plays rather than where their play style takes them, means that playing effectively can mean for a player actively working against their main objectives in game. For example, playing a low tier-killer, such as wraith, who can’t end chases quickly, but can start them reliably and get hits often will actually net you a very easy chaser emblem. Combine that with a constant patrol of generators and a half decent amount of hooks and you can get yourself easy pips just by refusing to waste time trying to actually down any survivors unless the situation is actively begging for you to get an easy hook.   The obvious example for survivors here is healing when its otherwise not a wise decision, just to get altruism points. There’s also the case of escaping unbroken (escaping the trial without being downed a single time) that requires the game to last more than 540 seconds. Why would a survivor be punished for escaping sooner than that amount of time? Obviously there is an issue when the game is actively punishing you for playing the game too efficiently. No question about it. The last issue, and this is more reflective of BHVR’s long term track record when it comes to game balance more than anything, is that all of these issues put together means it's incredibly difficult to figure out just what qualifies as something over performing and what qualifies as something that people don’t know how to play against properly. If you look at the stats dulled out by BHVR in November of last year regarding killer pick rates and kill rates seen above, you’ll see that, at high ranks, Freddy was the ‘strongest’ killer due to his high kill rates. Anyone at the time who was half decent at the game would have been able to tell you that the killer was pure garbage in a competitive sense, but somehow the statistics said otherwise.   The problem, ultimately, was that people simply didn’t know how to play against the killer, and those who did know how to play against him didn’t like to, and that was enough for players to kill themselves on hook, DC, play on tilt, whatever you might call it, the survivors were having none of it because BHVR has a ranking system that teaches its player base that everyone is number one and that you deserve to play against opponents that are trying to prolong the game and make it “fun” for everyone. *Moris everyone 4 minutes into the match* *clicks flashlight*. As a result, Freddy appeared to be incredible on paper while being trash in practice. Kind of sounds like the ranking system in general, doesn’t it?   As it stands, statistics mean nothing in DBD. Efficient killer play is predicated on trying to get as many chases as possible without ending to game too quickly, while the same is true for survivor, but flipped on its head with some fluff of casual messing around sprinkled on top which means nothing you read from a statistic in DBD reflects anything in truly efficient gameplay, which is supposed to be predicated on killing survivors as fast as possible while they complete generators without pause.   Ultimately, If players aren’t actually playing your game effectively, you can never truly know what is effective. There are exceptions, of course; DS, Moris, keys, and NOED. But the specifics are for another time. As for now, the focus is on the ranking system, it has to change. For this game to truly be competitive, there has to be winners, and there has to be losers. Balance will naturally follow.